The Titans added Julio Jones to their receiving corps to help bolster Derrick Henry's rumbling attack. But will their defense betray them again in 2021? Find out with our Tennessee Titans betting preview.

The Tennessee Titans came so close to the cusp of greatness in recent seasons but enter the 2021 campaign with two new coordinators, most notably trying to fill the high-scoring shoes of Arthur Smith.

Working in favor of Tennessee is a dysfunctional division that boasts two foes at the bottom of the season win totals and a top rival working in its third starting QB in three seasons. With plenty of short spreads on the road ahead, is the stage set for the Titans to make sweet music for bettors?

It’s really a two-horse race in the AFC South and the Titans’ divisional futures have swung up and down all offseason, due to the Carson Wentz trade, the Julio Jones deal, as well as the Colts’ rash of injuries during training camp. With Wentz apparently back on track to start for Indianapolis, Tennessee is a -110 favorite to win the division.

As long as Downing doesn’t stray too far from Smith’s play-action-heavy approach, the offense should continue to flourish with a receiving combo of A.J. Brown and Julio Jones hooking up with Ryan Tannehill, and RB Derrick Henry bashing his way downfield. The defense is pegged for improvement under a new DC, and should it find some semblance of a pass rush, that will be enough on the scoreboard most weeks.

The 2021 slate goes from shootouts to slugfests, with high-powered offenses in the first two months giving way to stingy stop units in the home stretch. That’s why I’m avoiding the win total in this topsy-turvy calendar and just going with the Titans to top the AFC South.

What will win bets: Derrick Henry

You know it’s coming but you can’t do anything to stop it. That’s the frustration defenses feel when playing the Titans and their bruising running back. The 2020 NFL rushing leader is an analytics cheat code, picking up an average of over five yards per carry the past two seasons while making any down a “running down” in the Music City despite what the pass-happy pundits are pushing.

Henry’s violent downhill style is an investment with every stiff arm and crack of the pads, banking that pain for a breaking point in the fourth quarter when opposing defenses say, “No mas”. How many times has Henry locked up a wager for bettors by converting on third down or a busting off a fantastic fourth quarter that kept the opposing offense on ice? Plenty.

His ability to move the chains and control the clock is also a huge boon for the Tennessee defense, giving it ample time to rest and strategize while also limiting its exposure.

And speaking of the Titans defense, it’s been the one thing standing in the way of this team joining the NFL elite. Last year’s group ranked 29th in Defensive DVOA, recorded only 19 sacks and forced just eight takeaways off fumbles, while boasting a marshmallow-soft pressure percentage of 17.6 – second-lowest in the league.

Shane Bowen was named new defensive coordinator, in hopes of shaking some life into this squad, and notable talents Janoris Jenkins, Bud Dupree and Denico Autry were added to round out the roster. Is that enough when the first nine games feature QBs like Kyler Murray, Russell Wilson, Josh Allen, Patrick Mahomes, and Matt Stafford?

With Smith taking the big job in Atlanta and the passing game in flux, the Titans offense will likely see a downtick in production and put the fate of bettors in the hands of the defense – especially in the second half of the schedule when stop units like L.A., New Orleans, New England, Pittsburgh, San Francisco and Miami show up.

Under coach Mike Vrabel, Tennessee has struggled as a favorite, with an 11-15-1 ATS mark when giving the points since 2018. And when you tighten those lines to -3.5 or shorter, the Titans shrink as well, going 4-8-1 ATS versus those smaller spreads (33%) including a 0-3 ATS count last season.

Even flipping those lines to a +3.5 to +1 range, the Titans come up short for bettors with a 5-8 SU and ATS mark as small dogs the past three years. Tennessee’s 2021 lookahead lines feature six spreads as underdogs of +3.5 or less.

Tennessee begins the post-Smith era with two NFC West foes right out of the gate before testing the waters of the AFC South at home versus Indy in Week 3.

The Titans opened as 2.5-point home favorites for this Week 1 non-conference clash versus the Cardinals and jumped to -3 when the team landed star WR Julio Jones in the spring. In three seasons under Vrabel, Tennessee is 5-1 SU and 4-2 ATS at home versus NFC foes. The total for this season opener is a lofty 51.5 points at some books. Over the past 11 seasons, Week 1 totals of 50 points or more have produced a 57-41 Over/Under record – topping the total 58 percent of the time.

Tennessee has the unfortunate honor of being the first road team to play inside Lumen Field since the pandemic banned Seattle fans in the stands. This will be the Seahawks’ home opener in front of a frenzied and football-starved “12”, with Seattle going 9-0 SU and 6-3 ATS in home debuts since 2012. The Titans are catching 3.5-points in this 4:25 p.m. ET Week 2 outing.

Will Carson Wentz be under center for the Colts when they come to Nashville in Week 3? Books seem to think so, with Tennessee giving 3.5 points to rival Indianapolis and the Over/Under installed at 50 points. Vrabel has been hit and miss when it comes to covering the spread in divisional games, but Over bettors have thrived when the Titans take on AFC South foes, with an 11-7 O/U mark since 2018, including a 6-3 O/U lean in home divisional dances.

This trek to north Florida is the second straight road game for the Titans after visiting the Jets in Week 4, and the team’s third away tilt in four weeks. A tough schedule spot is compounded by a potential lookahead game, with attentions swaying to a Monday Night Football showdown versus the Bills back home in Week 6.

Jacksonville will also have a mini bye to prepare for this AFC South matchup, playing at Cincinnati on Thursday in Week 4.

The Titans have been kind to fans of high-scoring football in recent seasons, boasting a 31-20-1 Over/Under record in three seasons under Mike Vrabel, including a 12-4-1 O/U mark in 2020 overall.

Home field has sparked the majority of those Over profits, with Tennessee topping the total to the tune of 16-8-1 O/U in the Music City – 67 percent Overs. A big part of that definitive split in total results was Arthur Smith’s offense, which lifted the Titans to No. 4 and No. 6 in Offensive DVOA at Football Outsiders in his two years calling the plays.

Now, with Todd Downing on the sideline, and a potential uptick in handoffs, those patented Over profits could hit a sour note in 2021. This may be a season of two totals for Titans fans, with some powerful offenses in the queue in the opening eight weeks and dominating defenses awaiting in the second half of the schedule. Watch for a shift in Over/Under results when the calendar flips to November.

Julio Jones is a shiny new weapon in this Tennessee passing game, but he’s been plagued by injuries the past two seasons, including playing only nine games in 2020. The Titans also watched WR Corey Davis and TE Jonnu Smith depart – their No. 2 and No. 3 receivers from last year- shaking up Tannehill’s targets.

On top of that, new coordinator Todd Downing told reporters he’s leaning on Henry even more this season, which means Tennessee could go beyond its 50.28 percent split in handoffs from last year. Henry rumbled for 2,027 rushing yards in 2020 – easily winning the rushing title – but bookies expect him to come back to earth with a steep decline in 2021.

Henry faces little pushback on the ground within the division, giving him six AFC South games to tear up the turf. The front end of the schedule features some softer stop units as well, before things buckle down after Halloween. A strong start to the Titans’ ground and pound will carry this prop a long way.

Tennessee has an opportunity to post some sizable scores in the first two months of the schedule, headlined by matchups with the likes of Arizona, Seattle, Buffalo and Kansas City.

The Titans have been one of the better Over plays during Vrabel’s tenure in Tennessee and the team has gone 7-1-1 O/U versus totals of 49 points or more since 2018, including 4-1-1 O/U against 50-plus numbers. 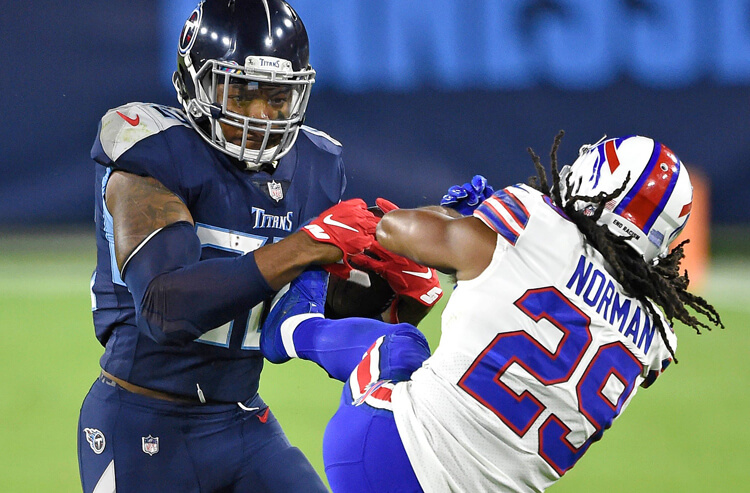