What does Over/Under mean?

The Over/Under is a set of odds in which you bet on whether the combined score will add up to more or less than the projected total number set by oddsmakers.

Over/Under betting, or totals betting, is one of the most popular options for sports bettors along with the point spread and moneyline.

Total bets are simply based on the number of points scored, without any link to the outcome of the game. Over/Under betting is found in almost all sports, including the NFL, college football, NBA, MLB, and NCAA basketball. 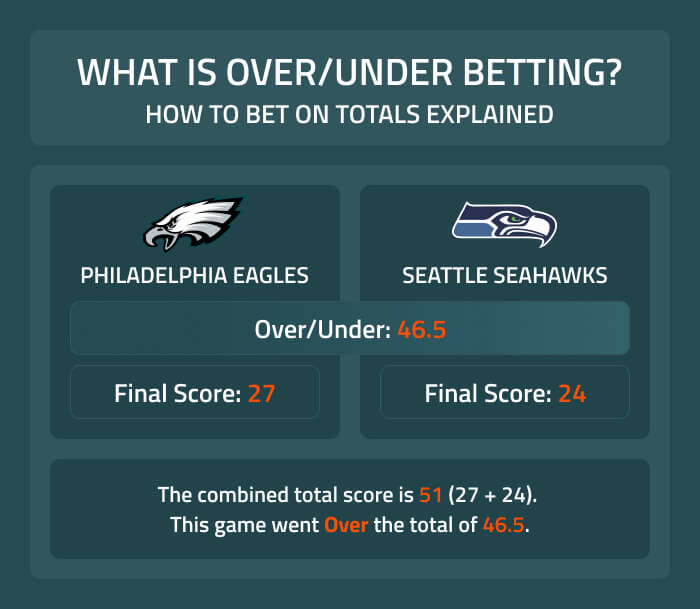 Let’s look at the betting total from Super Bowl LIV as an example of how to read Over/Under odds.

Based on these odds, the Over/Under for Super Bowl LIV between the Kansas City Chiefs and the San Francisco 49ers was 53 points. Each side of the total – the Over and Under – is assigned a cost of placing that bet, also known as juice or vig. The vig for most Over/Under bets is -110 on each side, which means in order to win $100 betting on the Over or the Under you would need to wager $110.

Kansas City won Super Bowl LIV by a final score of 31-20, with 51 total points scored by both teams. That means the Super Bowl went Under the projected total of 53 points. Anyone who bet on the Under 53 won their bets while anyone who bet the Over 53 lost.

How to bet the Over/Under

Before making an Over/Under bet, you’ll need to decide if the collective score will be more or less than the oddsmakers’ total and if you should make the bet now or later — because the Over/Under might change. Then you’ll want to understand the vig/juice on the total and how much you stand to win.

In this example, the total for this game between the L.A. Clippers and L.A. Lakers is set at 222.5 points with the vig on both the Over and Under set at -110.

Oddsmakers will often use half points when setting Over/Under totals, which means there is no chance for the final score to land directly on the projected total.

Looking at the MLB, the betting total for this game between the Washington Nationals and Los Angeles Dodgers is set at 7.5 runs. However, the Over has a vig of -120 while the Under is set at +100 or EVEN money.

This difference in the vig could be because there is a slightly higher probability that the final score totals eight runs or more. It could also reflect the amount of money already wagered on the Over, as sportsbooks attempt to entice bets on the Under at the lower vig to balance out the money on either side.

What is the payout on an Over/Under bet?

This gives the Under a better payout (95 cents for every $1 wagered on Under compared to 87 cents on every $1 wagered on Over) and induces action on the Under, balancing the money bet on either side of the Over/Under and ensuring a profit for the sportsbook regardless of the result.

Use our Over/Under betting calculator to see how much money you can win with your totals bet.

How is the Over/Under determined?

Oddsmakers take many factors into consideration when setting the Over/Under total, beyond the basic offensive and defensive stats of the teams involved.

Weather can have a significant influence on scoring production in outdoor sports like football and baseball, with wind serving as the most impactful conditions. Lineups, injuries, coaching plans, home and away results, and scheduling will also be measured by oddsmakers when setting Over/Under odds.

If the score equals the Over/Under betting total exactly, the bet is graded as a push and wagers are returned.

Most Over/Under bets do include overtime unless specified by the sportsbook.

Total is another term for Over/Under odds, betting on the total combined score.

Betting totals do not often use 3-way bets. They are most commonly used for moneyline betting in soccer, with odds on each team as well as a draw match. 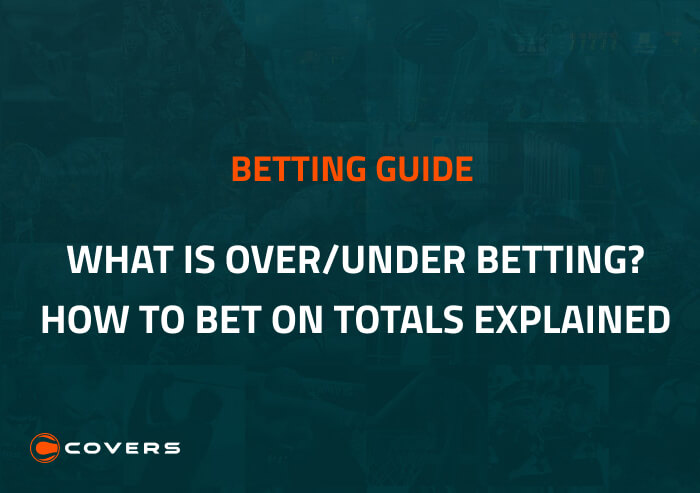 What is Over/Under betting? How to bet on totals explained
Provided by