US Election Betting Odds: Trump Ahead of Biden for 2024

Presidential election odds are seeing plenty of movement with Donald Trump ahead of Joe Biden as the US election betting favorite. We bring you the 2024 election odds for dozens of potential candidates, including Kamala Harris, AOC and The Rock.

With less than five months remaining until the midterms, former POTUS Donald Trump has widened his lead atop the U.S. presidential election odds board currently sitting at +250.

Incumbent president Joe Biden is in second place at +450 amidst cratering approval ratings but there's still time for him to close the gap.

With the next election still two years away, there are plenty of candidates to consider, so let's look at the election 2024 odds and see who has the best betting odds of becoming the next president of the United States.

Odds to win the 2024 US presidential election

Favorites to win the 2024 US presidential election

Shortly after the inauguration, Vice President Kamala Harris was atop the presidential odds board at +350, with Biden close behind at +400, and Trump in third place at +650. Those odds have shifted massively and Trump is now leading the field as the 2024 U.S. presidential election favorite at +250. Biden is second at +450 while Harris has dropped all the way to fourth place at +1,200 with Florida Governor Ron DeSantis jumping into third.

Other presidential betting favorites for 2024 include former South Carolina governor Nikki Haley (+2,000), Trump's VP Mike Pence (+1,400), Secretary of Transportation Pete Buttigieg (+2,000), and Fox News host and political pundit Tucker Carlson (+3,300). Tennessee senator Marsha Blackburn is one of the fastest risers, moving from off the board to +2,800 after her criticisms at Ketanji Brown Jackson’s Supreme Court confirmation went viral.

Joe Biden's odds of winning the 2024 US presidential election

President Biden's approval rating rose six percentage points in the latest Reuters/Ipsos opinion poll but it remains at just 42%. Biden's popularity cratered at a meager 36% last week, the worst number during his tenure as president.

Biden's latest market prices on the Smarkets exchange give him just a 14.71% chance of being re-elected in 2024 — identical to the 14.71% it previously bottomed out at in February.

Despite healthy growth in the  US job market and relatively low levels of unemployment, the Biden regime continues to face plenty of obstacles. Chief among them are surging inflation, rising fuel prices, and global supply chains still hindered by the Covid-19 pandemic.

Despite all those obstacles, Biden can take solace in knowing that even his 36% popularity last week wasn't quite as low as the 33% that Trump bottomed out at in December of 2017.

Donald Trump's odds of winning the 2024 US presidential election

Trump has increased his lead atop the election odds board and is currently installed at +250. Although the former POTUS has yet to formally announce he will campaign in 2024, he continues to organize MAGA rallies across the country.

He held his latest rally in Wyoming last week, where he declared his support for Harriet Hageman, who is challenging incumbent GOP Rep. Liz Cheney who just happens to be one of Trump's biggest critics inside the party.

While recently admitting that his health could be a problem, Trump also declared that his biggest party rivals Pence, DeSantis, and Mike Pompeo would not oppose him in a Republican primary.

The former President has not strayed far from the spotlight since his election defeat 18 months ago, staging multiple rallies across the Midwest and South while amassing $124 million in fundraising money.

According to a Harvard CAPS/Harris poll released at the end of January, Trump would dominate a hypothetical eight-person presidential primary. According to the poll, 57% of Republicans would support Trump for another White House bid, miles ahead of DeSantis (12%) and Pence (11%).

Kamala Harris' odds of winning the 2024 US presidential election

Harris has seen her odds tumble but she remains the Democrat favorite if Biden decides not to run again. A December survey of Democrat primary voters indicated that 31% would support Harris if Biden chose to forego re-election, 20% higher than second-place Buttigieg.

Harris is having a rocky tenure as VP and is struggling to break ground with her two biggest projects; border migration and national voting reform. In November her approval rating sank to a comically low 28%, the lowest of any VP in modern memory — a list that includes Dick Cheney.

Harris was previously on the U.S. Senate and has also served as the Attorney General of California. At 57 years of age, Harris is entering her political prime and ran for the Democratic nomination in 2020 before dropping out to endorse Biden.

Ron DeSantis' odds of winning the 2024 US presidential election

The biggest riser on the presidential election odds board is DeSantis, who was +6,600 a year ago and is now in third place at +550. The 43-year-old has remained coy about whether he will run for President in 2024 but remains a popular option for Republican voters if Trump isn't in contention. In the previously mentioned Harvard Caps/Harris poll, DeSantis had 30% of support in a field that excluded Trump, while Pence was second at 24%.

The Florida governor earned praise from the right for his state's laissez-faire policies during the COVID-19 pandemic. There are rumblings that while Trump would almost certainly win the GOP primaries, DeSantis would have a better shot at defeating the Dem opposition in a general election.

Tucker Carlson's odds of winning the 2024 US presidential election

Carlson has shot down rumors that he would consider running for president in the next election but oddsmakers don't seem so sure, with his odds sitting at +3,300. Carlson has a massive following, as he hosts the most-watched show in cable news, and his brand of conservatism appeals to many of the same voters that support Trump.

It will be interesting to see if Carlson's election odds plummet after on-air comments where he echoed Putin's arguments in favor of an invasion. Carlson's statements were so favorable towards Putin that clips from his TV segment were aired on Russian state-sponsored media.

AOC's odds of winning the 2024 US Presidential Election

Alexandria Ocasio-Cortez has emerged as one of the brightest young stars of the Democratic Party but has seen her odds fall from +3,300 in the New Year to +5,000 in March and she has now plummeted all the way to +10,000. AOC is currently serving as a member of the U.S. House of Representatives, representing New York's 14th district.

The politically savvy 31-year-old has built a massive online following and will be turning the requisite age of presidential eligibility just before the 2024 election.

Her biggest obstacle may in fact be her own party, with her more progressive views likely to alienate some of her colleagues unless they soften over time.

She recently hit the news for criticizing the Biden administration for not doing more to help student debt while Nancy Pelosi's new book "This Will Not Pass" accuses AOC and other progressives of vying to be "queen bee." Ocasio-Cortez could run the risk of being another Bernie Sanders if she can't convince the moderates that she is willing to make concessions on key issues.

Bruce Springsteen's odds of winning the 2024 US presidential election

What would election betting odds be without some celebrity long-shots? Kanye West emerged as a massive underdog candidate in the last election and Dwayne "The Rock" Johnson is at +5,000 while Rock and Roll Hall of Famer Bruce Springsteen has surged to +4,000, ahead of several prominent politicians.

We're not quite sure why "The Boss" is in the picture. While the music superstar had been openly critical of Trump when he was in the White House, Springsteen has never indicated any official interest in politics.

That said, he was born in the USA and born to run, which are really the biggest prerequisites for the job. Hell, he might even split the East Coast working-class vote, especially if he wins New York and New Jersey. Although he'd still have a lot of campaigning to do on the streets of Philadelphia.

It seems like a political career is a bit out of left-field for Springsteen, but Trump may have opened the door for future celebrity presidential candidates, especially ones oozing with charisma and money. And Springsteen did just sell his music for half a billion dollars, which would make for quite a campaign fund.

Action on the 2022 midterms is heating up as Americans head to the polls this November. The Republican party is favored to take the house and take more than 50 seats in the Senate.

Odds to win the U.S. House of Representatives

Odds for the number of Republican Senate seats

2024 US election betting odds over time

No U.S. states have legal election betting, so regulated betting sites don't offer election odds to Americans. However, bettors in other countries bet on election odds.

Yes. Some betting sites provide odds on the U.S. presidential election, but betting on elections is not legal in the United States and state-regulated books do not offer these odds. 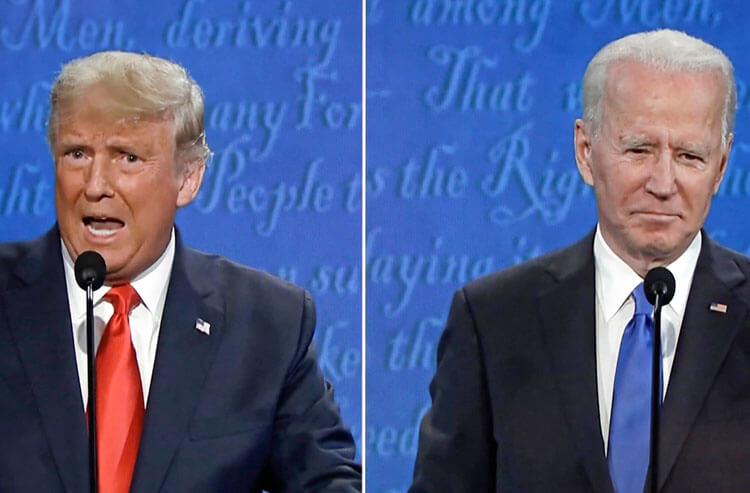 US Election Betting Odds: Trump Ahead of Biden for 2024
Provided by

2020 US Election odds: Kanye West is running for President
Jared Hochman | Jul 5, 2020
About Us
Contact Us
Careers
Our Team
Brand
Testimonials