The hard-luck Houston Texans will play in primetime at home on Thursday, welcoming the upstart Carolina Panthers. They'll be heavy underdogs with rookie QB Davis Mills under center, getting more than a TD. That and more in the full Week 3 NFL betting odds. 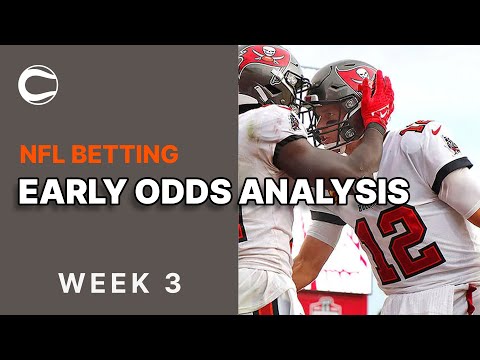 Week 3 of the NFL season is headlined by a powerhouse showdown between a pair of the NFC's best.

The Tampa Bay Buccaneers, who escaped a slight scare from the Atlanta Falcons en route to a blowout win (and double-digit cover) in Week 2, head to Los Angeles as favorites against the Rams, who are off to a 2-0 start behind new QB Matthew Stafford.

The week kicks off with a clash between the undefeated Carolina Panthers and the Houston Texans on Thursday and wraps up with the NFC East rival Dallas Cowboys and Philadelphia Eagles colliding in Arlington on Monday Night Football.

Here's the list of all the NFL Week 3 matchups and odds.

NFL odds for Week 3 are headlined by the undefeated Buccaneers visiting the 2-0 Rams as 1-point road underdogs, while the Cowboys are 4-point chalk in an NFC East showdown with the Eagles on Monday Night Football.

Odds courtesy of DraftKings Sportsbook as of September 22, 2021

UPDATE 8:10 A.M. ET, MONDAY SEPT. 20: Carolina opened as a touchdown favorite on the road in Houston and was quickly bet up to -7.5, due to the Texans’ QB situation.

Starter Tyrod Taylor will miss Week 3 with a hamstring injury, leaving rookie Davis Mills under center on a short week of preparation. Of course, Houston still has Deshaun Watson on the roster and his status for Week 3 is foggy after a falling out with the franchise and multiple sexual assault accusations this offseason.

The total for this game opened at 43.5 points.

UPDATE 8:20 A.M. ET, MONDAY SEPT. 20: With the status of Colts QB Carson Wentz (ankle) up in the air as of Sunday night, oddsmakers opened Indianapolis as 5-point road underdog at Tennessee — a dead number that would allow them more line flexibility to move off injury news.

Most books are staying at Titans -5, however, FanDuel sportsbooks dropped to -4.5 shortly after posting the Week 3 spread. The Colts would turn to Jacob Eason as QB in Week 3 if Wentz is unable to go. The total for this AFC South rivalry opened at 50 points.

UPDATE 8:30 A.M. ET, MONDAY SEPT. 20: This spread opened with the Giants as 3-point home chalk, enjoying a mini-bye after a close loss to Washington last Thursday, which is the first time New York has been a point spread favorite since Week 12 of last season. The total opened at 48.5 points and could climb considering Atlanta has hemorrhaged 80 total points in the first two games of 2021.

UPDATE 6:30 P.M. ET, TUESDAY SEPT. 21: A vital AFC West war will be waged in Arrowhead Stadium in Week 3. The lookahead line for this divisional game was as big as Chiefs -7 and after their loss at Baltimore on Sunday night, they opened as 6.5-point favorites.

UPDATE 8:35 A.M. ET, MONDAY SEPT. 20: A vital AFC West war will be waged in Arrowhead Stadium in Week 3. The lookahead line for this divisional game was as big as Chiefs -7 before their loss at Baltimore on Sunday night. The line came off the board before the Sunday nighter and will repost later on Monday.

UPDATE 6:40 P.M. ET, TUESDAY SEPT. 21: With Tuesday's news of Ben Roethlisberger's pectoral injury, this game has come off the board at most books. Before it came down, Pittsburgh was sitting as a 4.5-point home favorite, with the total set at 45 points.

UPDATE 8:40 A.M. ET, MONDAY SEPT. 20: This spread released at the dead number of Pittsburgh -4.5, with bookies taking the temperature of AFC North bettors. The Steelers are coming off a bad home loss to Las Vegas while Cincinnati nearly completed a comeback in Chicago in Week 2. The total is set at 45 points.

UPDATE 8:45 A.M. ET, MONDAY SEPT. 20: Injuries plagued the Browns’ win over Houston in Week 2, with QB Baker Mayfield, WR Jarvis Landry, and a slew of other Cleveland starters listed as questionable for Week 3. The spread opened with Cleveland as high as -7.5 and those injury concerns have swayed the vig on the Browns from -110 to -105. Chicago will likely be starting rookie QB Justin Fields on the road with Andy Dalton suffering a knee injury in Week 2.

UPDATE 6:30 P.M. ET, TUESDAY SEPT. 21: The early line on his matchup had Detroit getting 7.5 points from the visiting Ravens. After the Ravens played and won in a massive Sunday Night Football matchup, then the Lions put up a dud on MNF, it went back on the board with the 0-2 Lions getting 9.0 points.

UPDATE 9:00 A.M. ET, MONDAY SEPT. 20: The early line on his matchup had Detroit getting 7.5 points from the visiting Ravens. But with Baltimore playing — and winning — in the Sunday night game and the Lions facing Green Bay on Monday night, this is off the board at most shops.

UPDATE 9:05 A.M. ET, MONDAY SEPT. 20: New England opened as a field-goal favorite at home, taking on a Saints squad technically playing in its third straight travel game due to being displaced by Hurricane Ida before Week 1. New Orleans looked terrible in a loss at Carolina in Week 2, with a good chunk of the coaching staff out due to COVID-19 exposure, while the Patriots beat up on the Jets and rookie QB Zach Wilson. The total for this game is set at 43 points — one of the lowest Over/Under numbers in Week 3.

UPDATE 9:05 A.M. ET, MONDAY SEPT. 20: Arizona opened as a touchdown favorite on the road in Florida and that line quickly jumped to -7.5 at some books Monday morning, with others dealing Arizona -7 (-115). The Cardinals offense has produced 72 points in two games while the Jaguars have allowed 60 points against in that span. The total for this non-conference clash opened as low as 51 points and has climbed to 52.

UPDATE 9:10 A.M. ET, MONDAY SEPT. 20: The Washington Football Team has enjoyed a mini bye, thanks to a close win last Thursday, and now hits the road for the first time in 2021. Bookies opened Buffalo between -8.5 and -9.5, with some shops splitting the difference at Bills -9 (-110). The total for this non-conference game opened 47.5 and has dipped to 46.5 as of Monday morning.

UPDATE 9:15 A.M. ET, MONDAY SEPT. 20: What a difference two games can make. The lookahead line for this game was sitting at Denver -5.5 heading into the season, however, with the Broncos going 2-0 and the Jets falling to 0-2, books installed the home side as an 11-point favorite in Week 3. This spread has climbed to -11.5 at some books while others are dealing -10.5.

Denver hasn’t been a double-digit favorite since Week 6 of the 2017 season but is a tough team to beat in home openers, going 18-3 SU and 13-4-4 ATS in its first homestand of the schedule since 2000. The total for Week 3’s tilt is sitting at 41 points after moving down from 41.5 — the lowest O/U number on the board.

UPDATE 6:40 P.M. ET, TUESDAY SEPT. 21: After somewhat positive news surrounding the status of Tua Tagovailoa, the spread shifted from Dolphins +5.5 to +3.5, though more movement is sure to come as Miami's picture under center clears up ahead of Sunday.

The spread's shift did little to impact the total, which moved from 45.5 to 45.

UPDATE 9:20 A.M. ET, MONDAY SEPT. 20: The status of Miami QB Tua Tagovailoa has parked this spread on the dead number of Miami +5 with some books dealing +5.5. That gives bookmakers more wiggle room to adjust to injury updates without taking a ton of liability on a key number, like +6.

Tagovailoa is questionable for Week 3 after leaving Sunday’s game with Buffalo due to a rib injury. That said, Fins backup Jacoby Brissett does have plenty of experience under center. The total is sitting at 45.5 points.

UPDATE 9:25 A.M. ET, MONDAY SEPT. 20: The 0-2 Vikings opened as 1-point home underdogs for Week 3, hosting the Seahawks, who are coming off a collapse (and overtime loss) to Tennessee in their homer opener in Week 2. This spread is sitting as high as Minnesota +1.5 at some books, with our Covers Consensus showing 69 percent of early picks on Seattle. The total for this game is opened at 56 points and has come down to 55.5.

UPDATE 6:40 P.M. ET, TUESDAY SEPT. 21: Well, that was short-lived. After Tampa Bay opened the week getting points in a rare spot as underdogs, action on the Bucs has shifted the line to TB -1. The total continues to climb, from 53.5 at opening to 55.5 as of Tuesday evening.

UPDATE 9:30 A.M. ET, MONDAY SEPT. 20: The main event of Week 3 betting is a battle between the Buccaneers and Rams. The lookahead line set back in the spring had Tampa Bay installed as a 1-point underdog — the only 2021 game in which the defending champs are getting the points.

The official Week 3 opener is pretty much in tune with those projections, setting the Buccaneers as big as +2. Early money on Tampa Bay has slimmed that spread to +1.5 and +1, depending on where you bet. Covers Consensus shows 69 percent of early picks on the road underdog.

The total for this marquee matchup opened between 53.5 and 54 points and has climbed to 54.5 as of Monday morning

UPDATE 9:35 A.M. ET, MONDAY SEPT. 20: With the Packers still to play the Lions on Monday Night Football in Week 2, the early spread on this one has San Francisco as 4-point home favorites. Some books are down to 49ers -3.5 with injuries mounting for the home side. This line will come down before the Monday game and repost with reaction to those results. A strong showing from the Packers (-11.5 vs. Detroit) could slim this to a field goal spread.

UPDATE 9:50 A.M. ET, MONDAY SEPT. 20: A classic NFC East rivalry gets the Monday spotlight in Week 3 with the Eagles visiting the Cowboys, set between +3.5 and +4. Bettors have been bullish on Philadelphia the past two weeks but with the Eagles losing at home to San Francisco — and the Cowboys putting in two impressive performances to start the season (close loss to Tampa, win at Chargers) — this spread could grow as the public pounds “America’s Team” closer to the weekend. 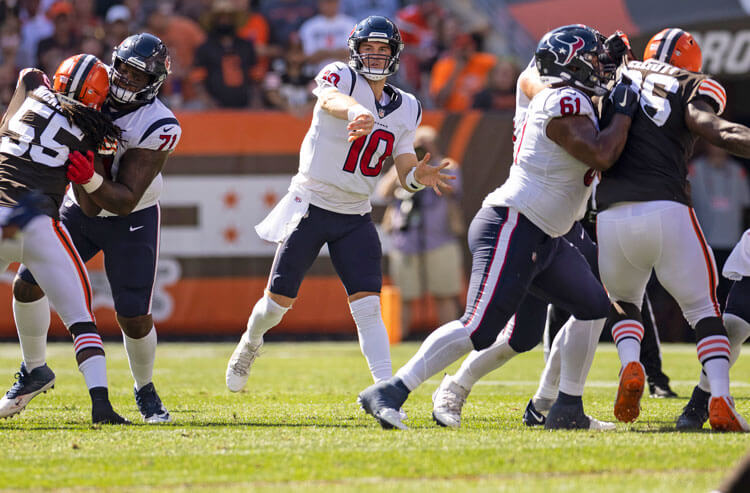