The Jags won just one game a year ago, but their win total suggests books are banking on them stepping up. Are Trevor Lawrence and their defense that good? Check out our Jacksonville Jaguars betting preview.

The Jacksonville Jaguars sure do know how to make a splash, and they haven’t even played a game yet.

The Jaguars turned heads with offseason additions as well as their 2021 odds, bringing in Urban Meyer as head coach, drafting Trevor Lawrence No. 1, signing then cutting Tim Tebow, and adding more uncertainty to enigmatic AFC South.

Coming off a one-win season, bookies have set the bar high for Jacksonville. Is that a knee-jerk reaction to the sudden public appeal of the Jags, or is the culture finally shifting in North Florida?

A rookie QB and a rookie head coach, as well as an overhaul in coordinators and systems, can’t be enough to add an extra six wins to a Jacksonville squad that won just a single game in 2020. Can it?

It seems oddsmakers are bullish on the Jaguars, given this optimistic win total and the multiple short spreads popping up in the 2021 lookahead lines.

Granted, the AFC South is a shitshow, but you’ve got to be very generous and expect a rapid maturation for both the offense and defense to get that win count up to six games – let alone the seven needed to go Over this total.

The schedule – ranked 18th in SOS (.491) - eases Jacksonville into 2021, but growing pains will spoil those early opportunities. By the time Meyer & Co. figure their shit out, the back half of the calendar tosses contenders and a number of road trips at the Jags, which won’t have a happy ending.

There’s so much uncertainty with Jacksonville in 2021, but the defense feels like the one unit that can step up and make this team competitive enough to cash in some point spread picks. New defensive coordinator Joe Cullen was a great hire and brings a culture of winning and responsibility with him from Baltimore.

Offseason additions like DT Malcom Brown and CB Shaquill Griffin are pillar players up front and in the secondary, giving a foundation to a youthful group that is oozing with potential, namely the linebacker corps with guys like Josh Allen, K’Lavon Chaisson, and Myles Jack. This is a very athletic group that can cause a lot of chaos if they can get a big push up front and let those speedsters attack the gaps.

What will lose bets: Urban Meyer

Regardless of what Meyer did in Florida or Ohio State, he’s still a rookie NFL coach in charge of a franchise mired in a culture of failure. And given his offseason track record (Tebow anyone?) and early grumblings out of camp, his “college” attitude isn’t flying with the pros.

The preseason hasn’t helped matters much either. Injuries and COVID-19 complications have decimated the starting offensive line, which was wishy-washy entering 2021 anyways. But those missing starters have really put Lawrence and this offense behind schedule, and the shorter preseason isn’t helping Meyer mature as an NFL coach.

If those short spreads are any indication, Jacksonville has plenty of winnable games early on (first six games have spreads between -3 and +3) but Meyer could find himself getting outcoached out of the gate. It will be interesting to see how a guy who only lost 26 total games in his last 15 years of coaching college will react to losing week in and week out in the pros.

The Jaguars are getting points in 14 of their 17 games in 2021 with a pick’em posted for Week 12’s homestand with Atlanta.

The bulky spreads we usually see handed over are on the lookahead board for Jacksonville (+9.5 at L.A. in Week 13) but to the surprise of some, plenty of those lines have the Jags as short underdogs. In fact, they’re underdogs of a field goal or less in seven of those 14 contests. The past two seasons, dogs of +3 or shorter finished 91-71-4 ATS (56%).

Urban Meyer couldn’t ask for a better opener to the 2021 season, traveling to Houston to play whatever the Texans are fielding this year. Then the Jaguars travel home for a set of games versus mid-tier contenders, which should give this team a good idea of where it’s at before another winnable road stop in Cincinnati to open October.

As it stands, Jacksonville is a favorite only twice in 2021, with both of those games coming against Houston. In four full seasons under Doug Marrone, the Jags gave the points only 23 times – going 10-13 ATS – and were installed as the road chalk in nine of those games, finishing 4-5 SU and ATS. The Week 1 lines opened with Jacksonville at -2.5 and money on the visitor moved this spread to a field goal, however, some books are back to dealing the Jags at -2.5 (-115).

Rookie QB Trevor Lawrence gets his first true taste of an elite NFL defense in Week 2, welcoming the Broncos as 1.5-point home underdogs. This will be a second straight road game for Denver and a 1 p.m. ET kickoff, making this an 11 a.m. wake-up back in Colorado. The total for this game is at 43.5 points – tied as the lowest Over/Under on Jacksonville’s 2021 slate.

A shift in tempo is in store for Jacksonville in Week 3, with the high-octane Arizona Cardinals crossing the country for another advantageous 1 p.m. ET kickoff. The Cards could also get caught in a lookahead spot, with a trip to play the Rams on deck in Week 4. Bookies are giving Jacksonville 2.5 points in this non-conference clash. In the past four seasons, the Jags went just 2-14 SU and 4-12 ATS versus NFC foes, including a 1-6 SU/ATS mark at home in those non-conference games.

A lot is going to happen between Week 1 and this Week 17 venture to New England in January. If the climate shift isn’t enough to throw the Jaguars off, this being their second straight road game and fourth away tilt in the past five weeks will.

The Patriots will likely be in pursuit of a playoff spot late in the year and let’s not forget Bill Belichick's appetite for the souls of rookie passers, going 20-5 SU versus first-year QBs since 2000. The lookahead spread is at a very flexible Jags +5.5. Expect this to be near a touchdown by the time the calendar flips to 2022.

In their final season under Marrone, the Jaguars pulled even with the Over/Under at 8-8. And looking at the early totals for 2021– seven of them are under 47 points – books are discounting Jacksonville’s offense and giving a nod to a potentially sound stop unit.

Meyer and offensive coordinator Darrell Bevell have preached a faster pace during preseason prep, but their best-laid plans took a hit when versatile rookie RB Travis Etienne was lost to a season-ending foot injury this summer. And without his fellow Clemson Tiger and no standout at tight end, Lawrence doesn’t have much of a security blanket when things break down.

The defense has plenty of potential, but much like the offense, it’s working in a new system with a 3-4 set, added plenty of new faces, and is learning the ways of new coordinator Joe Cullen. That said, they’ll find their way before the offense and the Under could be the top totals option for the Jags early on.

Mark my words: there will be a game at some point in the season in which Lawrence rushes for two touchdowns. That gets us halfway to this prop total. I don’t know when. I don’t know where. But that game is out there.

Lawrence scored 18 career rushing touchdowns in his three years at Clemson, with 17 of those coming in his final two seasons. And that was with an elite group around him going against ass ACC competition. Year 1 in the pros doesn’t offer him the same protection, nor does he have reliable check-down options to lean on, which means he’ll try to make something from nothing with his legs.

Looking at some past top QB prospects and you see the window is open for the Over 3.5 rushing touchdowns. Joe Burrow had three in just 10 games last year, Kyler Murray had four in 2019, and Josh Allen had eight in 2018.

Late-season lines have been tough for Jaguars bettors to swallow, especially when the schedule takes the team away from home.

In four full years under Doug Marrone, Jacksonville went 2-8 SU, 4-6 ATS, and 3-7 Over/Under in road games between Week 13 and Week 17. The Jaguars were rarely in postseason contention during this span and the argument for tanking could be made.

The 2021 schedule is back-loaded with road contests, putting the Jags in the role of visitors in four of their final six outings. 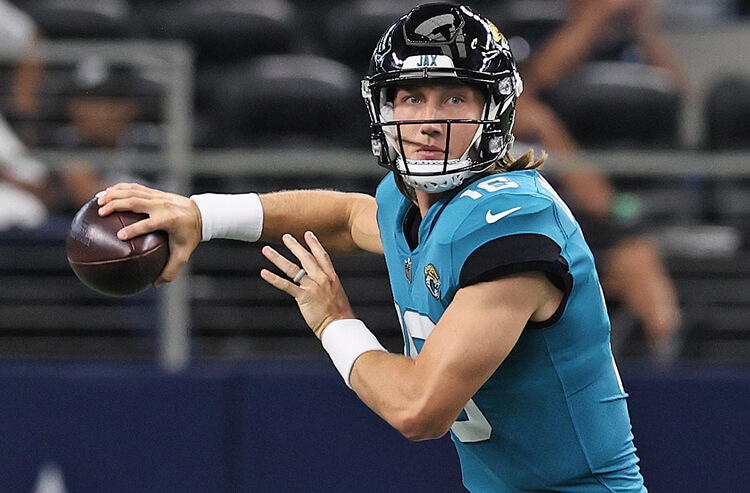