The Bengals had their 2020 season derailed by Joe Burrow's untimely demise. Now facing a tough division and schedule, will their young squad be running scared? We read between the stripes with our 2021 Cincinnati Bengals betting preview.

The Cincinnati Bengals are laying the tracks for success… but that train isn’t showing up in 2021.

The debate over Joe Burrow’s left knee has eaten up more airtime in Cincinnati than Dr. Johnny Fever and Les Nessman combined, and the defense has had to buy new nameplates in bulk after an offseason spent shaking up the depth chart.

Add these uncertainties to an ultra-competitive AFC North as well as a schedule that shows no mercy, and it’s tough for bettors to buy into the Bengals – even with them catching points most Sundays.

I just don’t see how Cincinnati squeezes seven wins out of this schedule. The divisional calendar alone is an uphill climb, with the Bengals getting the points – and plenty of them – in every AFC North matchup this year. Given the level of competition, there’s a good shot they go 0-6 SU in the division.

As an LSU fan, I love Joe Burrow more than the next guy, but seven wins just ain’t happening in 2021.

Everyone’s pulling for Burrow to return to form after a season-ending knee injury cut his impressive rookie campaign short in 2020. And should he do that, the Bengals will have bite with a standout receiving corps and a bell-cow back in Joe Mixon.

Burrow was cooler than cool (ice cold if you remember what Outkast taught us) while under fire in his first year, absorbing 32 sacks in 10 games behind an offensive line that couldn’t find a block in a Lego factory. That protection is improved in 2021 but Burrow’s mobility and confidence could be shaken.

To help with that, former LSU teammate and touchdown machine Ja’Marr Chase was added with a first-round pick. However, his preseason progress has been painfully slow after opting out of college ball last fall. Should all the pieces fall into place, Cincinnati scoring will pick up where it left off before Burrow went down.

What will lose bets: Defensive front

The Bengals defense was very active this offseason, swapping out long-time stalwarts for new faces in hopes of jump-starting something, especially in the front seven. Cincinnati was third last in pressure percentage, dead last in QB hurries, and recorded only 17 sacks on the season – another NFL low.

Even with all those changes, defensive coordinator Lou Anarumo still has a lot of work ahead of him if opponents are going to show this unit any respect. Above, we rolled out the list of opposing passers in 2021 and if the Bengals can’t make those arms uncomfortable, they’re going to get picked apart.

The bright spot of this stop unit is the secondary, with added depth in newcomers Chidobe Awuzie and Mike Hilton (and Trae Waynes, who missed all of 2020 with injury) and headlined by budding safety Jessie Bates III. They could at least buy the pass rush extra time with quality coverage but can’t do it all on their own.

The Bengals are underdogs in 15 of 17 games in 2021, including getting one point from the Jets in Week 8 – so you know things are pretty damn bad for Cincy.

The Bengals are force-fed the sixth-hardest schedule in the NFL (T6 to be exact - a .529 opponent win percentage) with a who’s-who of defenses up and down the calendar. According to The Athletic’s preseason poll, Cincinnati goes up against seven stop units ranked in the Top 12, including divisional foes Pittsburgh, Baltimore and Cleveland.

All those points could be a saving grace for Bengals bettors, especially when the Tiger Stripes hit the road. Cincinnati has historically been a strong bet away from home, going 36-23-2 ATS as a road underdog since 2010. Those fortunes have flattened a bit under Zac Taylor, with Cincy posting an 8-6 ATS mark as a visiting pup the past two years.

Cincinnati runs the gauntlet of lean, mean defenses in the opening slate of contests – Vikings, Bears, Steelers – and Burrow’s theme music should be Green Day’s 2004 alternative ballad, “Wake Me Up When September Ends” because this stretch is nightmare material for a young QB on the mend.

The Bengals are 3.5-point underdogs to the visiting Vikings in Week 1. Minnesota is projected to have an elite stop unit in 2021, serving as an instant temperature check for Burrow & Co. Cincinnati has yet to win a non-conference game under Taylor, who is 0-7-1 SU and 3-5 ATS versus NFC opponents the past two seasons.

The hits keep coming in Week 2, with a road trip to the Windy City to battle the Bears. Cincy is once again a 3.5-point pup in a non-conference game, taking on a Chicago defense upping the intensity. The Bengals have long been road dogs with bark and Taylor’s team is just 1-11-1 SU, but 8-5 ATS, when catching more than a field goal as a visitor since 2019.

A familiar foe waits in Week 3, with the Bengals pegged as 6-point pups in Heinz Field. Pittsburgh’s defense is among the league’s most dangerous, recording 56 sacks and 27 takeaways in 2020. Cincy has downright sucked versus its AFC North rival, lugging a 4-18 SU mark and 6-16 ATS record against the Steelers since 2010, including a 1-3 SU/ATS count the past two years.

Will this short spread be a trick or treat for Bengals bettors in Week 8? This Halloween party in East Rutherford seems like a rare winnable game for the Bengals, but the schedule is working against them. This will be Cincinnati’s third straight road game and comes on the heels of a run-in with a physical Ravens side. At this point in the season, the Bengals could be tenderized by all those hard-hitting defenses on the early slate.

Cincinnati was a 7-9 Over/Under team in 2020 but owned a 5-3-1 O/U count before Burrow was lost for the season in Week 11. The Bengals finished off the schedule with a 2-5 O/U count and scored more than 17 points in just two games during that home stretch.

Any early Over success will stem from Burrow’s injury bounce-back and if he’s not playing scared. His greatest quality is his composure and willingness to stand in the pocket to allow passing plays to develop, even while rival rushers close in. However, hearing footsteps could spook the second-year QB coming off the knee injury, and force him to hurry his throws.

As for Taylor’s playbook, it’s put up points at home but not on the road, averaging 20.8 and 16.4 points away from Cincy the past two seasons. That offensive ineptitude has manifested itself into a 5-10-1 Over/Under count away from home (62.5% Unders) since 2019.

Burrow was on one of the biggest rolls in sports between 2019 and 2020, starting with a four-TD MVP performance in the 2019 Fiesta Bowl, snowballing into the greatest single season for a quarterback in college history, parlaying into a Heisman, a national title and the No. 1 pick in the draft, then coming to an abrupt stop during a stellar rookie campaign due to a catastrophic knee injury.

Can Burrow find that career-defining momentum right away or will it take time for him to regain that swagger? If word from Bengals camp is worth anything, it sounds like Burrow may be tentative on his surgically repaired knee and that’s bad news for anyone looking to bet the Over on his 2021 props.

The schedule doesn’t do Burrow any favors either, with some very strong and aggressive defenses coming at him over the course of the season. I wouldn’t blame the Bengals one bit if they sat him out of the first three games. Bad knee or not, that stretch would be rough for any quarterback.

Cincinnati has long been one of the better wagers out of the gates, boasting a 35-23-2 ATS record between Week 1 and Week 3 since 2001. Under coach Taylor, the Bengals haven’t won a game outright in those opening three weeks (0-5-1 SU) but are 4-2 ATS in those contests.

As mentioned multiple times, the opening three-game slate for 2021 features some sound defensive opposition. But it also features plenty of points, with Cincy installed as a dog of more than a field goal in all three games. 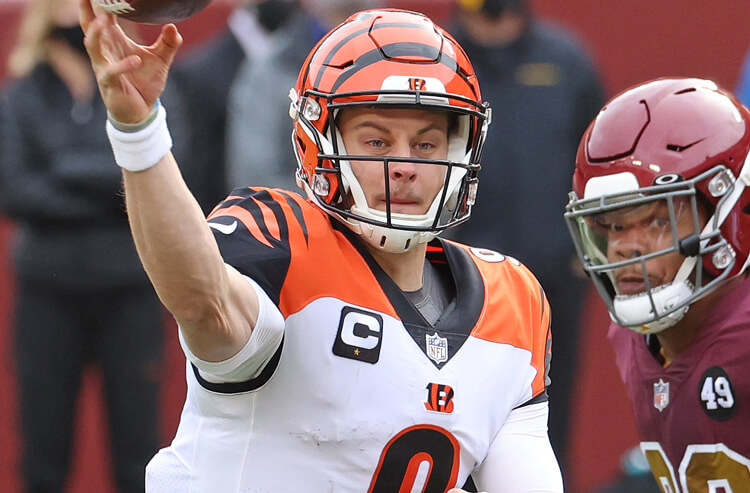