Baltimore Ravens 2021 NFL Betting Preview: It's Time For the Ravens to Take to the Air

It's championship or bust again for the Ravens this season — but after being carried by the ground game for years, is this season going to ride on Lamar's arm? Get our thoughts, plus our best team prop bets, in our 2021 Baltimore betting preview.

The expectations are once again lofty for the Baltimore Ravens, who are among the top contenders in the AFC and boast a double-digit season win total for 2021.

This is the third full season with dual-threat QB and 2019 MVP Lamar Jackson headlining a run-first attack that goes against the pass-happy trends of today’s NFL. His maturation as a quarterback will define the Ravens’ season as well as be the key for Baltimore bettors laying the points in all but two games this year.

The AFC North is no joke, with the Cleveland Browns aiming for a division crown and the Pittsburgh Steelers still posing a threat. Even the Cincinnati Bengals should be improved in 2021. On top of six matchups with those rivals, the Ravens’ schedule is loaded with contenders and dangerous defenses ready to solve the puzzle that is Lamar Jackson.

Eight of Baltimore’s opponents rank within the Top 15 defenses projected by The Athletic, including two games apiece versus Cleveland (11th) and Pittsburgh (5th). Granted, the Ravens’ stop unit is among those elite defenses (6th) but how much has the run-heavy and TOP-chewing offense padded those defensive results?

Baltimore was the fourth-best pressure team in 2020 (26.8%) but registered just 39 sacks (14th) and forced only 22 takeaways (17th). If the offense stubs its toe, this defense may not have the game-changing chaos needed to bail Baltimore out.

What will win bets: Rushing attack

Surprise. The Ravens’ rushing attack is the lifeblood of this team, wearing down opponents on offense while chewing up possession (31:43 TOP was 3rd most in NFL) and giving the defense plenty of downtime to rest and react to rivals.

Offensive coordinator Greg Roman says they want to balance the playbook with more passing, and the receiving corps is a touch better with the ghost of Sammy Watkins and rookie Rashod Bateman, who will be behind schedule after a preseason groin injury. But when shit hits the fan — and it will with this sked — Baltimore is going to ground and pound.

That elite rushing game, which averaged 5.6 yards per carry in 2020, should be enough given the Ravens are laying less than six points in a dozen of their 17 games this year. The trouble shows up when Baltimore has to play from behind and is forced to throw the ball…

Jackson is a great quarterback who proved he’s more than a pair of fleet feet during his 2019 MVP campaign. That said, there was expected regression in 2020 and with all the limitations on prep and practice in COVID-land last season, it’s safe to say he’s a little behind schedule in terms of his progression as a passer.

Being able to run the ball the way Baltimore can opens up space for the passing game, but this receiving corps isn’t threatening enough to truly take advantage of it. The 5-foot-9 Marquise Brown is battling hamstring issues this summer, which could leave TE Mark Andrews as the primary target in the early weeks of the season. Watkins is well past his prime and joins Brown and Bateman among those targets dealing with ailments in camp.

Teams now have two full seasons of tape on Jackson, and you can be sure defensive coordinators are cooking up schemes specifically meant to slow him down and force the throw. If Baltimore can’t consistently move the chains through the air, that could trickle down to the defense, which could buckle under the added work.

The Ravens are handed the second-toughest schedule in the NFL, but Baltimore spits in the face of the SOS rankings by being a point spread favorite in 15 of its 17 games in 2021, with a pick’em on the board hosting Kansas City in Week 2.

That spread count includes seven road games as the gambling chalk. In two full seasons with Jackson as the starter, the Ravens are 12-1 SU and 9-4 ATS as road favorites.

Baltimore’s 2021 slate boasts an opponent win percentage of .563 and the non-divisional foes are headlined by a number of teams atop the Super Bowl futures odds: Kansas City, Green Bay, and the L.A. Rams. Luckily, those three marquee matchups all come at home.

The 2021 kickoff is so bright, the Ravens gotta wear shades. Baltimore opens the season with back-to-back games under the primetime lights: Monday night at Las Vegas and Sunday night versus Kansas City. That intensity falls off a cliff with a road trip to Detroit to play the downtrodden Lions in Week 3.

Sin City will be in full swing when Baltimore battles the Raiders in what will be the fan-official opener for Allegiant Stadium after COVID-19 mucked up the works in 2020. The Ravens opened as big as 5.5-point road chalk and were bet down to -4 before recent buyback bumped the spread to -4.5. Harbaugh has been a solid bet in Week 1 openers, going 10-3 SU and ATS in the first game of the season since 2008 but just 3-2 SU/ATS on the road in those kickoff games.

The Chiefs are +250 favorites to win the AFC and the Ravens are priced at +700 (No. 3 overall), making this Week 2 war a huge trendsetter in the conference. The current lookahead is a pick’em, which will move after the knee-jerk reactions to Week 1. In Harbaugh’s tenure with the team, Baltimore is 9-4 SU and 8-5 ATS (61.5%) in games with lines of -2.5 to a PK.

In what could be the mother of all letdown spots, the Ravens ride into Motown to give 7.5 points to the Lions in Week 3. Baltimore is 9-1 SU and 6-4 ATS as road chalk of more than a touchdown over the past 13 seasons, including a 6-0 SU record and 4-2 ATS mark as big road chalk the past two years.

The only game in which the Ravens are currently catching points also happens to be one of the trickier spot bets ahead.

This AFC North battle is Baltimore’s second straight divisional road game after playing at Pittsburgh the Sunday prior. A home game versus Green Bay does wait for the Ravens in Week 15, but it’s tough to call this trip to Ohio a lookahead spot considering how close this division will be.

The big hook for this December 12 meeting is that the Browns will be well-rested and plenty prepared for whatever the Ravens roll out. Cleveland plays at Baltimore in Week 12, enjoys a bye in Week 13, then welcomes Lamar & Co. for this matchup in Week 14, giving the Browns three straight weeks of nothing but prep and practice for their AFC North rivals.

Baltimore finished the 2020 campaign with a 7-9 Over/Under record in the regular season. The Ravens are a tough team for total bettors to tie down, due to a run-heavy attack — which can explode for points — and a stingy defense that ranked ninth in Defensive DVOA at Football Outsiders last year.

All signs point to a push in passing yards for Jackson in 2021, but with injuries to his receivers this summer and some shake-ups on the offensive line, Lamar could be a one-man band in the first few weeks of the schedule.

He’s rushed for seven touchdowns in each of the past two seasons and faces some vaunted pass rushes in 2021, which could flush him out of the pocket and have him running for pay dirt more than Greg Roman would like.

This prop is heavily padded on the Under (-140) but the value lies with the plus-money, given the current circumstances and the fact that you’re not asking for much more from the greatest running QB in history.

The Ravens are horrible house guests for AFC North foes, which is bad for those divisional rivals but great for Baltimore bettors.

Harbaugh has set the tone for this team when hitting the road to play AFC North opponents, boasting a 23-12-4 ATS count (64%) in divisional road games since taking the job in 2008.

That’s rubbed off on Jackson, who in two full years as the team’s QB1 is 5-1 SU and ATS as a visitor in those AFC North grudge matches. 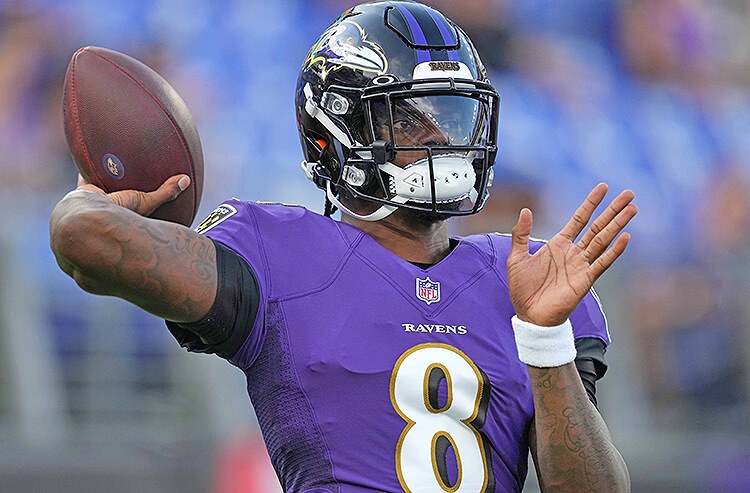 Baltimore Ravens 2021 NFL Betting Preview: It's Time For the Ravens to Take to the Air
Provided by