Aaron Rodgers' offseason has led many to believe this is the last dance for the marriage between the Packers and their franchise quarterback. Our Green Bay Packers betting preview takes a look at Rodgers and the offense and an uncertain defense.

Cue the Pearl Jam! This sounds like Aaron Rodgers' “Last Dance” in Lambeau.

The Green Bay Packers convinced the reigning MVP (and No. 2 preseason favorite for the award behind Patrick Mahomes) to return for at least one more season, lifting the Cheeseheads among the favorites in the NFC and allowing Packers backers to breathe easier knowing Rodgers and Davante Adams will be punching back against the point spreads in 2021.

It will take a total team effort to scale the steep chalky cliffs the oddsmakers are throwing up against Green Bay, which also navigates one of the toughest schedules in the league.

Even with Rodgers on the field, the Packers’ season win total of 10.5 could be a stretch considering just how hard the schedule is.

The NFC North is a bit tougher with Chicago showing life and the Vikings as Green Bay’s closest competition for the division crown. But I’d rather take Rodgers with one foot out the door than bank on Kirk Cousins’ consistency. Considering the Over 10.5 is priced at -130, the -200 price tag to win the NFC North is a steal in my books.

What will win bets: Scoring

As long as Rodgers stays locked in, this offense is going to put up points. We saw leaps and bounds in Year 2 under Matt LaFleur and the Packers padded that top-ranked passing game with a deep roster of receiving options, headlined by Adams.

The offensive line is a bit shaky given the health and durability of veteran David Bakhtiari and the departure of center Corey Linsley. Green Bay does face some dangerous defenses in the first eight games (New Orleans, San Francisco, Pittsburgh, Washington, Chicago, and Arizona), so the Pack have to shore up their starters and position gaps quickly if they want to keep Rodgers clean – and happy.

The Packers defense isn’t bad. It’s just inconsistent. Joe Barry is the new defensive coordinator, coming over from an assistant role in Los Angeles and bringing with him a less-than-sterling resume as a DC. Barry is hoping to inject some energy into this group, which registered 41 sacks with a pressure percentage of just 21.1 (sixth lowest) and forced only 18 total takeaways (seventh lowest) in 2020.

With an offense like this, you’re not asking much from your defense in order to win games. But with Green Bay pegged as a large favorite most weeks and the public piling on the points, you’ll need a bit more from the stop unit to cover the spread.

Green Bay was handed the fourth-hardest schedule in the NFL (.542), with a number of contenders up and down the calendar. However, the Packers are point spread chalk in 14 of their 17 games, including all eight contests inside Lambeau Field.

Home-field advantage and the perceived 3-point edge is a hotly debated topic among football handicappers but it’s safe to say Lambeau is a happy place for Green Bay bettors.

The Packers’ 2021 effort opens with two of the first three games on the road, setting the table for a challenging first half of the slate which takes Green Bay away from home in seven of the first 11 games of the year.

The odds for Green Bay's Week 1 trip to New Orleans have been fun to track this summer. Green Bay hit the board as a field goal underdog in the Big Easy, with bookies protecting against Rodgers’ exodus from Wisconsin. However, once the MVP was back in the mix, the spread swung to Packers -3. Since 2008, Green Bay is a remarkable 10-3 SU and 9-4 ATS in Week 1, including a 5-2 SU and ATS count on the road in those openers.

Week 2 is effectively an additional exhibition game for LaFleur & Co., giving 10.5 points to the Lions at home. Detroit is undergoing an overhaul but has played the Packers tough in recent seasons (5-1 ATS since 2018) and LaFleur has never covered as a double-digit fave in his time in Green Bay (0-3 ATS). With a big primetime game in San Francisco in Week 3, the Packers could take their foot off the gas in the second half of this one and open the window for the beefy underdog.

The 49ers are giving three points to Green Bay at home on Sunday Night Football in Week 3, one of only three 2021 games in which the Cheeseheads are underdogs. The Packers have been pups only seven times during the regular season in two years under LaFleur and are 5-2 SU and ATS when catching the extra points.

As mentioned, the first half of the Packers’ schedule is extremely road-heavy. This includes a trip to Arizona in Week 8, setting up a gnarly situational spot that is getting plenty of respect from the bookies.

Not only is this matchup with the Cardinals the third road game in the past four weeks (five in first eight) but it comes on Thursday Night Football, putting the road-weary Packers back on a plane during a short week.

The cherry on top of this spot bet sundae is a Week 9 showdown at Kansas City that could act as a lookahead spot for those fading Green Bay. The Packers are 33-26 ATS as road favorites the past 13 seasons but just 13-13 ATS when giving a field goal or less as visitors.

The 2020 Packers posted an Over/Under count of 9-7 O/U in the regular season, facing some pretty lofty numbers in terms of totals. Green Bay had 10 games close with totals of 50 points or more, going 4-6 Over/Under in those contests.

The 2021 lookahead lines ping the Pack with four Over/Under numbers of 50 or higher, showing some respect to Green Bay’s new defensive coordinator Joe Barry, who comes from the L.A. Rams organization and hopes to inject this unit with that disruptive defensive approach.

The Cheeseheads have been good for Over results earlier in the season, playing above the total in 35 of their last 51 games in September. But, as always, mind the Wisconsin winter once the calendar flips to December. Green Bay is 5-10 Over/Under at home between Week 13 and Week 17 the past six seasons.

Rodgers amassed 48 passing touchdowns and 4,299 yards in 2020 despite the offense throwing the ball just 56.23 percent of the time. If the Packers are out to please Rodgers and keep him around for another season, he’ll have even more touches in 2021.

Rodgers has topped 35 passing TDs in only five seasons since taking over the top job in 2008, but this is arguably the deepest receiving corps he’s ever had. Adams is a threat to crack 20 touchdowns and new/old additions of rookie WR Amari Rodgers, Randall Cobb, and Devin Funchess, give A-Rod even more options for the end zone. And let’s not forget wideouts Marquez Valdes-Scantling, Allen Lazard, and TE Robert Tonyan, who combined for 20 touchdowns in 2020. 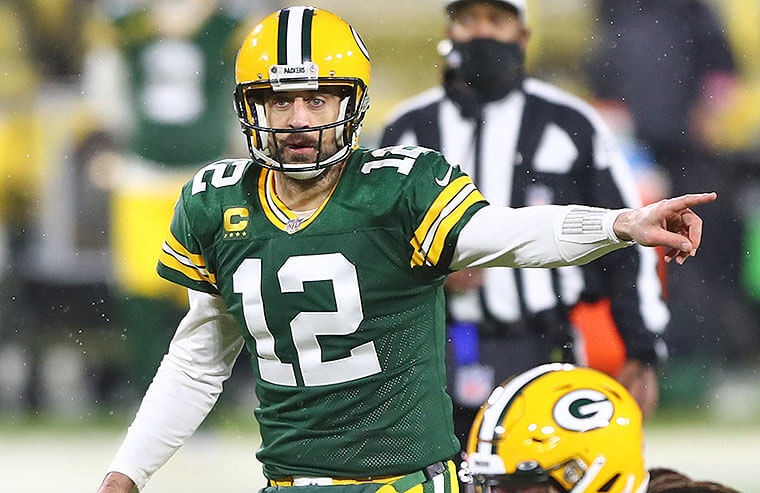