Chicago is trying to rekindle its defensive fire, but with a flaky QB situation and a brutal schedule, it may not amount to much. We break down everything you need to make a buck off what could be a rough season with our Chicago Bears betting preview.

While Justin Fields matures behind a pair of veteran passers, the Bears will depend on their defense to keep them in games and douse the flames on Matt Nagy’s office chair. A slow start to the season could snowball into a blustery year in the Windy City.

Andy Dalton and Nick Foles may be ahead of Justin Fields on the depth chart, but everyone knows the rookie passer is going to get the top job at some point this season. And given some of the defenses Chicago faces along the way, it may want to hold off until the Rams, Browns, Bucs, Steelers, 49ers and Ravens are in the rear-view (all ranked Top-11 defenses by The Athletic).

That would take us to Week 12, and I doubt Bears fans are going to be that patient with the process. The backend of the 2021 slate lightens a bit but still includes two clashes with the Vikings’ vaunted stop unit and an aggressive Arizona attack that ranked T4 in sacks (48). Fields or no Fields, this offense is in for a very long season.

What will win bets: Chaotic defense

Sean Desai was promoted to defensive coordinator and tasked with returning the Chicago defense to the top of the pile in 2021. His emphasis is on creating chaos, which means plenty of pressure and manufacturing turnovers – something Chicago was elite at a few seasons ago.

That philosophy relies heavily on the front seven to force rival QBs to make mistakes. The Bears’ secondary doesn’t have the ball-hawking talents of 2018, so that high risk/high reward approach could burn bettors in the form of big plays. Chicago was able to collect 35 sacks but forced only 18 takeaways (10 INTs) while giving up 50 passing plays of 50 or more yards in 2020.

Which Nagy offense shows up in 2021? This playbook has been hit and miss during his time in Chi-Town and 2020 was a perfect example of that inconsistency. The Bears were 31st in scoring in the opening 10 games (19.1 ppg) but then posted an average of more than 30 points over their final six contests.

The Bears aren’t busting with elite talent at the skill positions, headlined by WR Allen Robinson, and the offensive line has holes that could be ripped wide open by the murderer’s row of opposing defenses that litter Chicago’s 2021 dance card. The Bears have scored 21 points or less in 20 of their 32 regular season games over the past two seasons.

The Bears have been cursed with the third-toughest 2021 schedule (.550) and the lookahead point spreads reflect that uphill climb, with Chicago set as an underdog in 13 of 17 games this season. Oddsmakers know it’s either Andy Dalton, Nick Foles or rookie Justin Fields under center in those games.

Chicago doesn’t ease into its challenging 2021 schedule, putting its uncertain QB situation up against two of the most intimidating defenses – on the road no less – in L.A. and Cleveland. Sandwiched between those away games is a home stand against Cincinnati (which could hold weight for Dalton, if he’s still QB1 by Week 2).

Chicago is under the Sunday Night lights in Los Angeles for Week 1, catching a cool touchdown in SoFi Stadium (45 O/U). This game will serve as a delayed stadium opener for the Rams’ brand-new digs after fans were kept home due to the pandemic last year. The Bears and Rams have played Under the total in all three meetings with Nagy as head coach. Chicago also 5-13 O/U in its previous 18 games as a road pup.

Week 2 could be the Andy Dalton Bowl with the Bengals coming to the Windy City to face their former franchise quarterback. The operative word is “could”. Fields has impressed in preseason play and Bears faithful will be chomping at the bit to see the first-round pick in regular season action. Chicago is laying 3.5 points – one of only four games as a favorite – but is 4-8 ATS in non-conference games since 2018.

The Cleveland Browns await in Week 3, with the Bears once again getting a touchdown on the road. Since Nagy took over the sideline job in Chicago, his team is 1-6 SU and 2-5 ATS when pegged as a dog of +6 or higher. The Browns play a horrendous Houston squad at home the week before, so Cleveland will be fine-tuned and ready to roll by Week 3.

December in Chicago is about as opposite the Arizona desert as you can get. Arizona is coming off a bye, but Chicago also has extra time to prep, playing on Thursday the previous week. The Bears are short home underdogs, a role that’s paid out in Nagy’s tenure in the Windy City, with Chicago going 4-1 SU and ATS as a home dog of a field goal or less.

As mentioned above, the Bears have some diminutive numbers on the board in 2021, topping out at 48 points at Tampa Bay in Week 7.

Last year’s squad finished 8-8 Over/Under in the regular season, but saw a surge in Over results in the second half of the schedule (5-1 O/U in final six games) when Nagy made adjustments on the offensive line and the rushing attack suddenly sprung to life.

The Bears’ defense is projected to be among the top half of the league once again, and if the offense needs time to gel with whoever is throwing the ball, another gold rush of Unders could await in the first half of season. And as always, keep a close eye on those Windy City weather reports.

New defensive coordinator Sean Desai is a disciple of former Bears DC Vic Fangio and is trying to capture the chaos of that 2018 Chicago defense that recorded 50 sacks and a league-high 36 turnovers. Mack was responsible for 12.5 of those sacks that year but hasn’t breached the 9.5-sack mark the past two seasons (8.5 in 2019, nine in 2020).

The Bears’ secondary is nowhere near as drum-tight as it was in 2018, which means Desai is leaning on the pass rush to bail out that soft spot and make life tough for opposing passers. Mack is only in his eighth season and has plenty of tread left on the tires, and the front of the 3-4 returns nose tackle Eddie Goldman (opted out of 2020), who commands extra attention and opens space for rushers.

Life in the NFC North hasn’t been kind to Bears bettors the past two seasons, with Chicago going 4-8 ATS (6-6 SU) versus divisional foes including a 2-4 ATS count last season. The Bears averaged only 20 points per game in those dozen dust-ups with the NFC North. 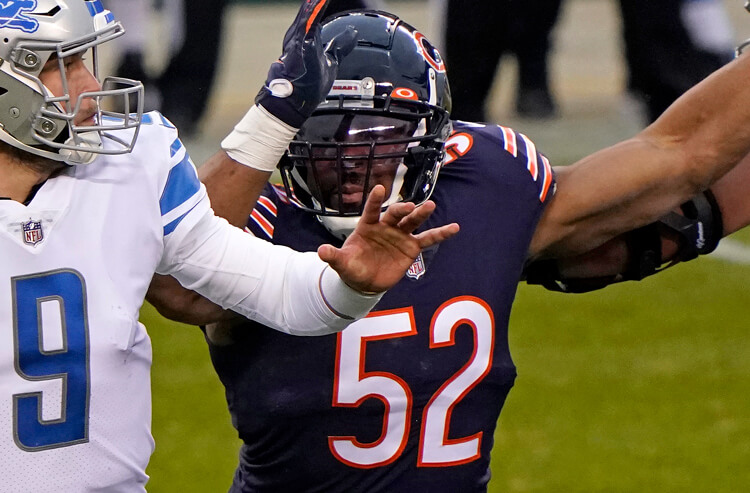