After injuries and Kirk Cousins doing Kirk Cousins things sabotaged last season, Minnesota is looking to re-tool with sights on a playoff return. Find out if an elite D and Dalvin Cook can power this squad with our Minnesota Vikings betting preview.

The Minnesota Vikings are NFL betting royalty, at least when their season isn’t plagued by injuries and a pandemic.

Minnesota posted its first losing season for bettors under head coach Mike Zimmer in 2020, finishing 6-10 against the spread. The Vikings are expected to rebound from all that red with a restocked defense and an offensive attack that ranked among the best in the league last year – as long as Kirk Cousins can stay out of his own way.

The Vikings were a postseason team two years ago, making it to the divisional round, and I’m tossing some of those 2020 results in the trash due to the disruptive nature of last season and the massive impact injuries had on Minnesota.

If the defense can return to the level we all know and love Mike Zimmer for and the offense repeats last year’s efforts, this is one of the better two-way teams in the NFL. And let’s not forget Zimmer tends to make the postseason in odd-numbered years, qualifying for the tournament in 2015, 2017, and 2019. Is 2021 next?

Expectations are high for the Vikings defense in 2021. Last year could be considered a wash, what with injuries and COVID-19 throwing a wrench in Zimmer’s plans. Minnesota made waves with big-name defensive signings and returns impact players that missed big chunks of time last year.

The pass rush isn’t as strong as other elite stop units in the NFL, but the return of DE Danielle Hunter gives that pressure some teeth after recording a pass rush win rate of just 36 percent in 2020. Also in action is DT Michael Pierce, who will help plug up the middle and bolster the run stop.

Top those returnees off with the additions of veteran corner Patrick Peterson and safety Xavier Woods patrolling the pass defense, and Minnesota’s stop unit will give bettors a shot to cover most Sundays.

What will lose bets: Kirk Cousins

The table is set for Cousins to succeed. Cook’s ability to run the ball keeps defenses honest and Cousins has two reliable targets in Adam Thielen and second-year burner Justin Jefferson, along with budding TE Irv Smith Jr. As a bonus, this defense shouldn’t need too many points to edge opponents on the scoreboard. But as we’ve come to find out, you can lead a horse to an $84 million contract, but you can’t make him earn it.

Cousins’ slow start to 2020 put the Vikes in a bad place, opening the year 1-5 SU (3-3 ATS) while the QB lugged a passer rating of 88.2. He turned it around down the stretch, with a TD-to-INT count of 20-3 in the final eight games, and his 2020 stats were pretty comparable to Russell Wilson, who garnered MVP buzz. But unlike Wilson, Cousins isn’t single-handedly winning bets for Minny backers. But he sure is losing them.

Oh, and that’s if he’s not sitting out due to COVID… SMFH.

The Vikings’ 2021 schedule is ranked as the fifth-toughest in the NFL (.531) and it shows in the lookahead lines, as they are favorites in seven of their 17 games.

However, Minnesota is an underdog of +3 or lower in seven games, and Week 6’s trip to Carolina is pegged at a pick’em. The Vikes are catching points at home in three games this season and since 2014, when Coach Zimmer climbed aboard, they’re 8-3 ATS as home pups.

A pair of road trips face the Vikings to start 2021 – visiting Cincinnati and Arizona – before football bettors get a good grasp on just how good or bad this Minnesota squad could be when the Seahawks come to town in Week 3.

The Vikings opened as modest 2.5-point favorites against the Bengals in Week 1 and this spread has jumped to -3 with early play on the road side. This opener appears to be a good stepping-off point for the new-look defense before taking on the likes of Arizona and Seattle in the coming weeks. Minnesota has been “straight cash homie” versus AFC foes, going 19-9 ATS in non-conference games since 2014.

New Vikings corner Patrick Peterson has a homecoming in the desert when Minny makes its way to Arizona to play the Cardinals as a 3-point underdog. Arizona’s aggressive pass rush will test this young offensive line and Klint Kubiak’s playbook., serving as a telling game for Cousins and his presence under pressure. The 49.5-point total is the highest Over/Under on the board for Minnesota’s 2021 lookahead lines.

Minnesota enjoys its home opener in Week 3 when Seattle saunters into town as a 1.5-point underdog. The Vikings are one of the best home bets in football under Zimmer, boasting a 35-22-1 ATS mark as a host since 2014. But during a disastrous injury-plagued, COVID-impacted 2020, the Vikes finished just 2-4 ATS inside an empty U.S. Bank Stadium. The Seahawks will be vying for a postseason spot in the NFC as well, and this game – even though it’s only Week 3 – will go a long way in defining Minnesota’s 2021 success.

I’ve seen some rotten spot bets in my day, but this could be one of the worst. The Vikings will be playing their second straight road game and fourth road stop in five weeks when they visit the Lions on December 5. But wait, there’s more!

Minnesota will be coming off an important matchup in San Francisco in Week 12 – the team’s second California trip during this stretch – and could get caught looking ahead to a short four-day turnaround for a home date versus Pittsburgh on Thursday Night Football in Week 14.

This lookahead spread is currently at the dead number of Minnesota -4, but knowing Detroit’s projected trajectory, the Purple People Eaters could be laying a lot more in this sloppy sandwich spot. If you like underdogs, wait it out and see how many points you can get with the Lions.

The Vikings’ 11-5 Over/Under record in 2020 isn’t hard to decipher. Minnesota’s defense was decimated by injuries and opt-outs while the offense ranked No. 3 in yards per game (393.2) and averaged almost 27 points a contest.

This year, barring another rash of injuries, the stop unit will return among the NFL’s elite. The Vikings defense ranked No. 4 in Defensive DVOA in 2019 and No. 3 in 2018, and Zimmer padded the depth chart with solid offseason additions as well as getting key bodies back from injuries.

Minnesota will be solid on the offense side of the ball, but Kubiak is rolling out a downhill offense that leans heavily on RB Dalvin Cook. The Vikes handed the ball off on 45.75 percent of snaps last season and if Cousins can’t be trusted or rookie QB Kellen Mond gets some run, expect that ground and pound to continue – chewing up clock and keeping scores low.

I’m projecting some serious value for the Under in Minnesota’s early schedule, especially on the road where the Vikings are 24-33-1 O/U (58% Unders) since Zimmer became head coach in 2014.

How you bet this Cook prop really depends on your outlook for Minnesota in 2021. I’m high on the Vikings, which means I see them playing with leads later in games and protecting those cushions by running the ball – and the clock.

Cook amassed 1,557 yards on 312 carries last season, averaging five yards per attempt. Minnesota has invested a lot into this offensive line in past drafts, and that young talent could click in 2021, improving on a run block win rate of 70 percent last season (T14).

The first half of the schedule also features more than a few foes who struggled to stop the run in 2020 (Detroit, Las Vegas, L.A. Chargers, Dallas, Cincinnati – all ranked 21st or worse in Run Defense DVOA).

If football betting had a Hall of Fame, Mike Zimmer would be in it for his herculean ATS efforts as head coach of the Minnesota Vikings. 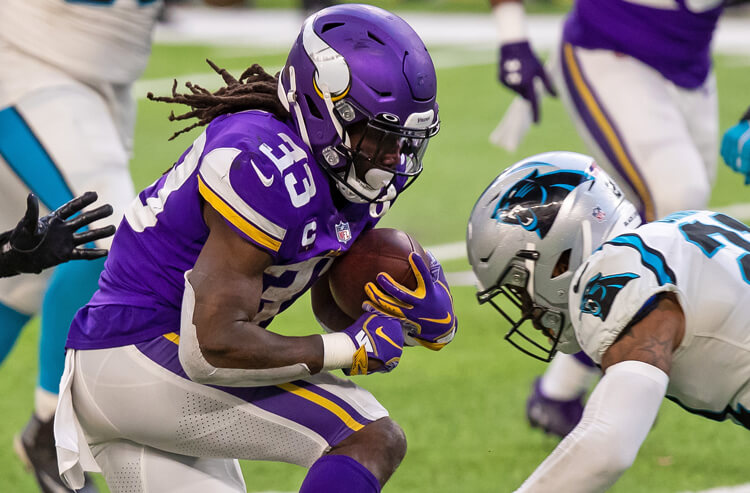