Thanks to a soft schedule to end the season, Miami was able to finish last year with a 9-8 record. With plenty of new faces on the offensive end, will it be able to build off that record? Find out in our Miami Dolphins betting preview. 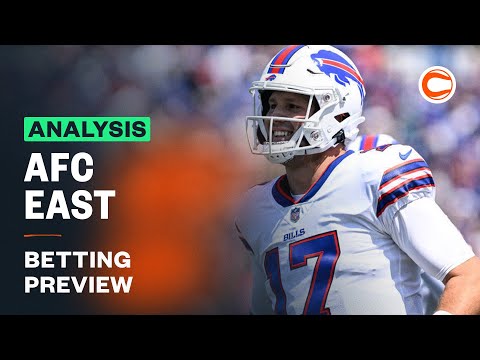 A soft end to 2021 nearly cradled the Miami Dolphins all the way to the playoffs, but the 2022 slate is not as cushy. If the Dolphins want to make the tournament, they’ll have to crawl over hot coals and battle sub-zero wastelands in the final two months of the season.

Miami’s NFL odds have them on par with last year, even with Mike McDaniel taking over the head coaching chair after an ugly exit from Brian Flores. McDaniel has surrounded quarterback Tua Tagovailoa with dangerous speed and installs his zone running schemes and all the misdirection and RPO that comes along with it.

We see how things will shakedown in South Beach with our Miami Dolphins 2022 betting preview.

The lookahead lines have Miami favored in eight games in 2022 (with Week 10 vs. Cleveland OTB) and the best spot to pick up enough wins to qualify for the playoffs is the first half of the schedule. Six of those games as the betting chalk occur before Week 10.

The hook is that you have plenty of new playmakers and blockers working in a foreign offense that requires attention to detail. You also have a quarterback being asked to leave his comfort zone of short outside strikes and throw more in the middle and further downfield.

There’s bound to be some growing pains in those opening weeks, which could sour Miami’s postseason chances before the nasty part of the sked shows up. The Dolphins close the campaign with four of the final six games on the road, including three straight road games between Week 13 and 15: at 49ers, Chargers, and Bills. Yikes.

Flores’ departure could have an impact on this defense, but the Fins managed to retain his top man Josh Boyer to run this stop unit. The Dolphins mix in different looks, from 4-3 to 3-4, and retained the foundation of a unit that finished 10th in defensive DVOA at Football Outsiders and ranked fifth in sacks with a pressure rate of 28.5% (third highest).

The 2021 squad went 7-2 against the spread in the final nine games of the season, thanks in large part to the defense checking foes to 17 or fewer points in six of those games. If Miami is going to make any money against the spread — especially early on — the stop unit will have to pick up the slack for an offense in incubation.

What will lose bets: Off-track offense

Everything looks good on paper. McDaniel is an offensive savant and brought in some burners to blaze a trail to the end zone. The team made a massive trade for Tyreek Hill, brought in fleet-footed running backs Chase Edmonds and Raheem Mostert, and bolstered a bad offensive line with tackle Terron Armstead. The Fins also added underrated wide receiver Cedric Wilson to a passing game that features Jaylen Waddle and tight end Mike Gesicki.

That has people excited and the market reacting, with Miami drawing shorter spreads against some of the NFL’s top teams and seeing its totals rise with nine lookahead numbers of 46 points or higher. However, so much hinges on Tua’s maturation and how quickly McDaniel can cook up chemistry.

It won’t be an easy transition. Within the first seven games, the Dolphins face four teams ranked among the top dozen in EPA allowed/play last season and two of the other defenses in that span belong to the Ravens and Steelers — both expected to sit among the elite in 2022.

Like I said, the Dolphins have to make hay before the winter sets in and oddsmakers expect them to have at least seven wins by the time December rolls around — if the lookahead line are any indication.

The Dolphins’ standard strength of schedule ranked out 21st, based on last year’s win percentages. Foes like the Jets, Lions, and Steelers are all ripe for improvement, though. My QB SOS was not so kind to the Fins, who finished with the 11th toughest slate of rival QBs, including a possible Week 10 run in with Deshaun Watson, should he get a shorter suspension.

I don’t believe in Tua, but I do believe in McDaniel and the weapons they have put around him. This defense overachieved with Flores, so this could be an Over team this year.

Three tough defenses will show any cracks and blemishes in McDaniel’s new offense right out of the gate in 2022.

The Dolphins don’t have to wait long to see where they sit in the AFC East food chain, hosting the Patriots in Week 1. Miami opened -3, dropped to -2, and is now sitting -2.5 at most books. The Fins have long been a thorn in the side of Bill Belichick when these rivals meet in Miami, with the Dolphins going 13-9 SU and 13-8-1 ATS hosting New England since 2000.

Week 2 sends Miami to battle in Baltimore, getting four points from the host Ravens. Baltimore should at least be healthy early in the year and working the kinks out on their new defense, after facing the Jets in Week 1. Under Flores, the Fins were just 6-11 SU as road pups but came away with a 10-6-1 ATS mark in those away games.

A return home in Week 3 sees the mighty Bills pull into Hard Rock Stadium. Buffalo decimated Miami 35-0 as a 3.5-point favorite the last time it was in Miami. This time around, books are bouncing between +3.5 and +4 for the Fins. Flores never beat Buffalo in his three years (0-6 SU) and finished 2-3-1 ATS in those divisional dances.

Miami’s playoff hopes and anyone tossing down dollars on the Over 9 wins will be put through the ringer from December on. It all comes to a head in Foxborough on New Year’s Day, which will be the Dolphins’ fourth road game in five weeks.

This insane stretch starts in Week 13 with an emotional cross-country trip to play McDaniel’s former team and mentor Kyle Shanahan at San Francisco. Miami may hang out on the west coast for the week with a roadie against the L.A. Chargers in Week 14. The Fins get a shock to the system going from sunny California to the bitter cold of Buffalo in Week 15.

But it doesn’t end there. The schedule makers throw the drowning Dolphins a life preserver in the form of a Week 16 home game… against Aaron Rodgers and the Packers. Then, it’s back on the road for a chilly January 1 date in New England.

Miami finished 7-10 Over/Under in 2021 due to an overperforming defense and a less-than-dangerous scoring attack that managed +0.1 yards per point (18th) and sat 28th in yards per play (4.8). Those Dolphins played at a pace rating of 15th, going from third fastest in first halves to 25th in seconds per play in the final two quarters.

McDaniel’s playbook is potent and the Fins have some great playmakers, but this offense rolls out at a more plodding pace. All the pre-snap movement, reads, and misdirection take time to set up, which is why San Francisco has ranked out among the more methodical offenses the past three seasons.

That makes Miami a big “time of possession” team, which means a slow scoring rate for both sides and it bolsters the defense, which is the backbone of this club. The 2022 lookahead totals are a few ticks higher than what the Fins faced last year, with perhaps a knee-jerk market reaction to this new-look offense. Makes you really wonder about the Under…

I’m skittish when it comes to Tua Tagovailoa’s total yardage. This prop is asking for a near-1,300-yard increase from last year but with guys like Hill, Waddle, and Wilson — along with some speedy pass-catching RBs — the YAC might just get him there.

Instead, I’m fading his touchdown total and going Under 25.5. He’s not going to be throwing as much under this run-heavy system and if it follows suit with San Francisco, this is a slow-rolling attack. On top of that, the schedule doesn’t lie down for the Fins, with plenty of stingy stop units along the way.

McDaniel just wants to get the ball in the hands of his best playmakers, so expect Tyreek to see plenty of handoffs and tosses rather than be on the receiving end of Tua’s throws. Inside the red zone, Tagovailoa is a great run option with all those moving pieces and misdirection, taking some passing TDs off the board.

A new head coach and new offense doesn’t leave much in the way of trends with teeth for the 2022 Dolphins. However, one thing Flores was fantastic at was finishing strong.

Miami went 16-8 SU and ATS from Week 10 onward in his three seasons in South Beach, including a stellar 10-2 SU and ATS count at home between Week 10 and Week 17/18. The Fins have one hell of a home stretch with only three home games from Week 10 on (including a Week 11 bye).