The 49ers were crushed by injuries last season, headlined by star DE Nick Bosa. His health is one of the keys to San Fran's return to prominence in 2021 and he seems to be right on schedule — but should you bet on him and the Niners this year?

No NFL team was more snake-bitten last year than the San Francisco 49ers. And it wasn’t just plight during a pandemic season either. The Niners were cursed with almost 162 games lost to ailments — without counting COVID-19.

Those injury issues make San Francisco the toughest team to peg down for the 2021 NFL season, coming off a 6-10 SU record and 7-9 ATS count. On paper, this is a deep and talented team in the deepest and most talented division. Is that enough for Niners bettors?

As you can see from the above futures, bookies are giving plenty of respect to the Niners in 2021. But, with Kyle Shanahan’s injury track record and San Francisco’s QB situation (which is the worst among top contenders), it’s tough tying up money on this team for an entire season.

The playoff prop allows for wiggle room on the 49ers who, given their projected win total, should at least finish second in the NFC West. And that should be enough to make the tournament in 2021.

New defensive coordinator DeMeco Ryans inherits a stop unit that ranked No. 6 overall in Football Outsiders DVOA. While that group did benefit from a run-heavy offense chewing up clock, the Niners were stingy versus the pass (allowing only 6.2 yards per pass attempt). They’ll benefit from Ryans’ more aggressive game plan, after registering only 30 sacks in 2020, but the health of DEs Nick Bosa and Dee Ford is the lynchpin.

What will lose bets: Quarterback

The Niners have a top-tier offensive line and plenty of rubber to burn in the ground game, but what happens when San Francisco has to pass the ball?

Of all the elite NFC contenders, San Francisco has the shakiest situation under center. Jimmy Garoppolo’s ripcord has a hair-trigger and FCS prodigy Trey Lance could be thrown into the deep end early on. That may be a big ask for a team giving the points most Sundays.

The 49ers are point spread favorites in 13 of their 17 games in 2021, and the potential to be the chalk in 15 outings with one pick’em and a Week 3 battle versus the Packers currently off the board. Kyle Shanahan is just 7-18-1 ATS as a favorite since taking over the head coach role in 2017. Woof.

The opening three weeks sets up San Francisco for a solid start to the season — at least in the win/loss column. Covering those spreads could be a tougher task.

The Niners open 2021 with back-to-back 1 p.m. ET (10 a.m. PT) road games. First up: a trip to Motown to face the Lions as 7.5-point favorites in Week 1. That half-point hook is sticking out like a sore thumb for a team working in two new coordinators. Under Shanahan, the 49ers are a dismal 1-7-1 ATS when giving a touchdown or more.

Week 2 sends San Francisco to the East Coast to face Philadelphia. Depending on how the Aaron Rodgers situation shakes down in Green Bay, this second straight road stop could be a lookahead to the Packers in Week 3. The 4-point spread is a bit of a dead number, so expect some hefty line movement based on Week 1 knee jerks.

The line for the Niners’ home opener versus the Cheeseheads on Sunday Night Football is currently OTB due to the Rodgers/Davante Adams drama in Wisconsin. If those talents are in green and yellow come September 26, this one would have San Francisco as a home underdog (early lines had 49ers +5). Shanahan is 3-1 ATS (2-2 SU) versus the Packers in his time in San Fran but 0-4 ATS (2-2 SU) in home openers since 2017.

Music City could be a sour note for the Niners, who will not only be playing on a short week for this Thursday nighter — but it will also be the team’s third road game in four weeks.

San Francisco has back-to-back away stints at Seattle and Cincinnati before hosting Atlanta at home in Week 15 (always an emotional matchup for Shanahan), then turning around for a mid-week matchup with the Titans.

Shanahan’s 49ers are 10-6 ATS versus the AFC but who knows how much of this injury-plagued roster will still be active by the time December 23 rolls around.

When it comes to setting totals in the modern NFL era, the 49ers are a bit of a throwback. The tallest Over/Under in the Niners’ current lookahead lines tops out at 47.5 points for a Week 15 homestand facing the Falcons.

The San Francisco defense will be sound, and the playbook will still lean heavily on the ground game — especially early on if Lance gets the nod. That said, the Niners do have capable receiving threats in WRs Brandon Aiyuk, Deebo Samuel, and TE George Kittle. There could be a pivot to Over results once this offense finds its form.

The elephant in the locker room is the strength of Bosa’s knee after missing 2020 with a torn ACL. It seems his recovery is on schedule as teams enter camp, but his durability and explosiveness are in question.

Bosa was the lifeblood of this 49ers stop unit as a rookie in 2019, recording nine sacks and causing chaos at the line. Defensive architect Robert Saleh is gone to New York but new DC DeMeco Ryans is looking to dial up the intensity to 11 and getting other bodies back on the D-line is vital to Bosa’s success.

If anything, Bosa will have plenty of chances to collect the heads of QBs in divisional games alone. NFC West foes are going to be throwing — a lot — and Bosa could eclipse this sack total in those six matchups alone.

Pay attention to the point spread when betting the 49ers’ totals. We mentioned Shanahan’s piss-poor record as a regular-season favorite since 2017 (7-18-1 ATS), but the Niners are also 17-8-1 Over/Under in those games (68 percent Overs).

When getting the points, San Francisco is 16-22 O/U (58 percent Unders). The 49ers are currently underdogs in just two games (with a pick’em at Arizona and OTB vs Green Bay).

Games with San Francisco as an underdog 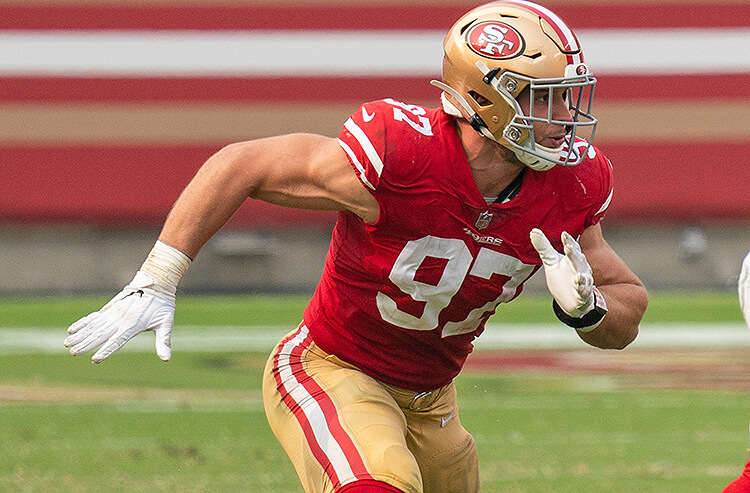