A lot of question marks surround Washington heading into the 2022 campaign, with Carson Wentz now in charge of the team's offense. Will its defense be able to make up for Wentz's poor decision making? Find out in our Commanders 2022 betting preview. 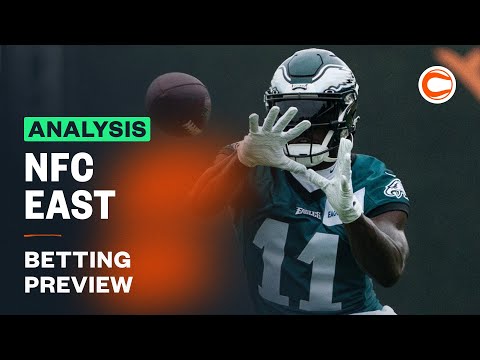 Washington bettors have been through the desert on a team with no name, but can a new moniker and new quarterback in Carson Wentz make the Washington Commanders contenders — or at least better than a 7-9-1 against the spread?

With D.C. entering Year 3 under coach Ron Rivera, the sports betting industry seems a little lost on the Commanders. The team’s win total ranges as much as a full game from book-to-book and the lookahead lines add up to anywhere from 6.5 wins to as many as eight.

The sins of the front office set the bar pretty low in the nation’s capital, which could actually open up NFL betting value. We find out where in our Washington Commanders 2022 betting preview.

Oddsmakers don’t know what to make of the Commanders in 2022, as evidenced by their contrasting win totals across the market. Washington opened with a win total of 8.0 (Over -110) which is still out there as of this writing (DraftKings) while other shops (PointsBet) are lower at 7.5 (Under -130).

Then we come to FanDuel, which is dealing D.C.’s win total at 8.5 (Under -170). It’s an expensive buy for the Under but considering you’re paying about 30-40 cents more to get as much as an extra win on a team that really has no business winning nine games, it may be worth the wager if you ante up.

The 2022 lookahead spreads have moved away from Washington in many of its games, leaving the Commanders to go from a collective total of eight wins (six games as faves with four pick’ems) to just 6.5 — again depending on where you bet.

What will win bets: Defensive line

This D-line is loaded with first-round studs and plenty of potential, with its success trickling down through a defense that got this franchise to the playoffs two years ago. But it begins and ends in the trenches. The 2021 “Football Team” was one of the worst teams at defending the pass —– most notably on third downs — after ranking out No. 2 in pass defense DVOA in 2020.

With Chase Young hopefully back sooner than later (could miss first four weeks while recovering from ACL) and Montez Sweat staying healthy as well, this front four (and sometimes five) can generate quarterback pressure without bringing the blitz. That helps pad a thin linebacker corps and protect a flimsy secondary.

What will lose bets: Carson Wentz

Wentz’s second tour in the NFC East comes with question marks, like, “why would Washington trade for the mistake-prone QB in the first place?” The Football Team won seven games in 2021 despite losing veteran QB Ryan Fitzpatrick in Week 1 and having to audible to Taylor Heinicke.

Carson Wentz has a higher ceiling than those guys. However, his basement floor is bomb-shelter low. Durability is a detriment and his decision making in the crunch is downright befuddling. He threw three of his seven total interceptions in the final 15 minutes and owned a passer rating of 89.4 in fourth quarters — when bettors need him most.

Wentz has a few weapons in D.C., like home run-hitting WR Terry McLaurin, and a sound offensive line, but isn’t as protected as he was in Indianapolis. The Colts had a better o-line and run game, passed the ball just 52.57% of the time and really only needed Wentz not to f-ck up royally when he did drop back. Unfortunately…

After throwing Washington a curveball in 2021, the schedule overlords have fitted the newly-dubbed Commanders with one of the easiest slates for the upcoming NFL season.

On top of that, Washington ranks out with the second lowest rating in my QB SOS — so Wentz isn’t completely outmatched by his QB counterparts. If the defensive line can disrupt those rival passers, the Commanders will be a sneaky good against the spread team until the market catches up.

As mentioned above, Washington’s lookahead lines are different book-to-book and those spread projections range from six and a half wins to as many as eight when you split the difference on pick’em games. Three of those games as favorites come in the opening six weeks — a stretch that has plagued the team under Rivera. Washington is just 3-9 straight up and 4-8 ATS from Week 1 to Week 6 the past two seasons.

The quotes from Indy about the Wentz era are concerning for Washington. Frank Reich was his biggest supporter, and now even he’s given up on the former second-overall pick. I don’t have high hopes for him in a toxic Washington franchise.

The opening stretch sets up well for Washington: Favorite vs. Jaguars, favorite at Detroit, and a 1-point dog vs. Philadelphia — three teams that finished 31st, 29th, and 25th in defensive DVOA at Football Outsiders last season. While that may help Wentz and Scott Turner’s offense transition, two of those first three foes have intimate knowledge on D.C.’s new QB.

The franchise begins the “Commanders” Era in a Week 1 home date against Jacksonville. Washington opened at -4 and is down to -3.5 at some books. This opener has an interesting twist as Jaguars' new head coach Doug Pederson knows Wentz better than any coach in the NFL, going back to his tenure in Philadelphia.

Week 2 takes the Commanders to Detroit, where Washington sits between -1 and -1.5. If Washington lays an egg at home to Jacksonville, expect this spread to slide to pick’em or even jump the fence to Lions -1. As it stands, it has only been a home chalk three times under Rivera (3-0 SU/2-1 ATS).

Wentz gets his first career crack at the Eagles in Week 3, with Washington playing host to this NFC East rivalry. This spread is out there between PK and Commanders +1. Philadelphia comes in on a short week after playing on Monday, but again this franchise would have plenty of tape on Wentz kicking around. The lookahead total is set at 46.5 points. Washington went 2-6 O/U vs. totals of 46-plus last season and 3-8 O/U the past two years.

Washington does face a pricky proposition in Week 11, vs. Houston of all teams. The Commanders also don’t have a bye until Week 14, so there could be little gas in the tank by the time November 20 rolls around — especially considering the emotional matchups ahead of this spot bet.

Washington has a loaded road game at Indianapolis in Week 8 (+5.5) against the team that traded Wentz away and then lambasted him upon departure. It comes home to host Minnesota in Week 9 (+1.5) before another stop on the Wentz revenge tour at Philadelphia for Monday Night Football in Week 10 (+4).

That puts the Commanders on a short week in a potential letdown spot at Houston in Week 11 for what will be the second of back-to-back road games and their third away tilt in four weeks.

Scott Turner’s schemes have been dying to let it rip the past two years but just didn’t have the right quarterback to hit those big downfield strikes, losing Fitzpatrick in Week 1 last year.

Wentz has a big arm and better accuracy than any of the previous passers in D.C. (which isn’t saying much). Turner is itching to stretch the field and has downfield threats like McLaurin, Curtis Samuel, and rookie WR Jahan Dotson to hit those home run balls.

Washington’s schedule sends plenty of paltry defenses its way, including only three games against teams that ranked Top 10 in pass defense DVOA in 2021. The Commanders’ weekly Over/Under numbers are pretty short considering that slate of foes as well as their defense getting shredded through the air in 2021. There’s good Over value in those early-season shootouts.

McLaurin signed a three-year extension with the team this summer and is set up to play alongside the best quarterback he’s had in four years with the franchise, in an offense that’s dedicated to utilizing his ability to strike for big gains.

“Scary Terry” has posted receiving yard totals of 1,053 and 1,118 the past two seasons while catching balls from the likes of Heinicke, Garrett Gilbert, Kyle Allen, and Alex Smith. McLaurin gushed over Wentz during OTAs and should see a significant uptick in his targets after catching just 77 balls in an offense that passed just 55% of the time in 2021.

Washington could be one of the toughest teams in the NFL to handicap, given the wide margin of opinions from oddsmakers, who have the win total between 7.5 and 8.5 and the lookahead spreads calling for 6.5 to as many as eight wins.

The Commanders have plenty of tight lines with seven games currently owning spreads inside a field goal (-2.5 to +2.5), and a Week 17 home date with Cleveland that’s OTB. Under Rivera, Washington has gone 6-5 SU and 7-4 ATS in games within that range, including 3-2 SU and 4-1 ATS as a visitor vs. those short spreads.