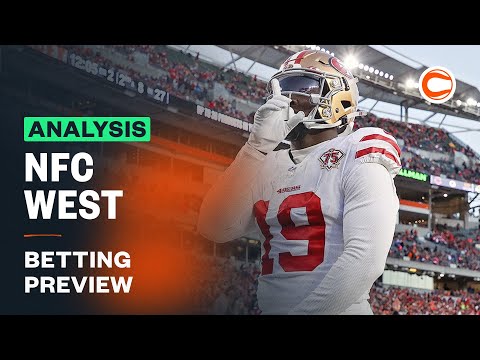 Whether the second-year quarterback is ready or not, the Trey Lance era is here. Luckily for him, Kyle Shanahan and the rest of the San Francisco 49ers offer a pretty big safety net.

This is one of the most dynamic offenses in the league and could be even better with Lance’s dual-threat wheels adding a new wrinkle to a playbook that ranked Top 6 in a number of advanced metrics in 2021.

Defensively, the 49ers are deep and dominant at the line of scrimmage, stuffing the run and getting to opposing passers. San Francisco’s NFL odds have high hopes, giving the points in as many as 13 games and saddled with a schedule that is set up for success.

That said, this team is just 16-25-1 ATS as a favorite during Shanahan’s time in San Fran. We pan for gold with our San Francisco 49ers NFL betting preview.

With lookahead lines calling for as many as 13.5 wins plus rave reviews of QB Trey Lance coming out of camp and early preseason play, the 49ers are looking pretty damn good as we get closer to kickoff 2022.

The team does have quality competition on the calendar. Still, the schedule makers shine down on Kyle Shanahan’s team, namely after the Week 9 bye when San Francisco fails to play a true road game from Week 10 to Week 14 and finishes the year hosting six of the final nine contests.

Its only real sticky schedule spots come in the team’s only back-to-back road games, which pits San Francisco against Atlanta, and a short week for Thursday Night Football in Week 15 at Seattle.

But wait… that’s not all.

The Niners’ top competition in the NFC West finds themselves in tough schedule spots when San Fran rolls around on the sked. Arizona is playing its second of back-to-back away games when it travels to the thin air of Mexico City to play the 49ers in Week 11 and then sees San Francisco in the Week 18 finale — another second of B2B roadies and its third in four weeks.

As for the Rams, they run into a similar road-heavy spot in Week 4, playing the 49ers on the second of back-to-back away games as well.

The Niners were already tough to slow down, not only coming at defenses with a deep room of running backs but transforming WR-turned-RB Deebo Samuel into one of the most dangerous weapons on the ground in 2021. Add a dash of Lance’s crazy legs in 2022, and San Francisco’s system is going to be a headache for even the stingiest stop units.

The “Guess Who?” depth of this running game not only allows the 49ers to set whatever pace they want and chew up time of possession (so valuable when protecting leads) but it opens things up for RPO and play-action spots. More specifically, establishing the run will lead to deeper passing strikes from that misdirection.

As mentioned, the 49ers are point spread favorites in as many as 13 games, according to lookahead lines for the 2022 season. That puts them behind Tampa Bay (fave in 16 games) and on par with Green Bay and Los Angeles (faves in 13) in the NFC pecking order.

Those lines include two big piles of chalk to start the schedule: -7 at Chicago and -9 vs. Seattle. San Francisco should smash those opening foes and, if the early spreads are any indication, the Niners are going to look very good to the betting public with potential cakewalks versus Chicago, Seattle, Carolina, and Atlanta in the opening six games (average spread of -6.75 in those matchups).

The odds are already high on the 49ers this summer despite the most important position on the field being a big question mark. Sure, Lance looks good in practice and exhibition, but what happens in real life?

If the Niners roll those weaker foes, the point spreads will puff up like a bee sting and skew the market ahead of some stiffer competition in November/December.

Early lookahead lines released in the late spring had San Francisco installed as a point spread favorite in 10 games with two pick’ems on the board. However, later lookaheads and line adjustments over the summer have the Niners giving points in as many as 13 games with two PKs — panning out to an estimated 13.5 victories versus a season win total as low as 9.5 (Over -145).

San Francisco does face one of the gnarliest schedules in the NFL, ranked out T5 in standard SOS. This is largely due to drawing the AFC West in non-conference play, which pits the 49ers against the last three Super Bowl champs: L.A. Rams (twice), Tampa Bay, and Kansas City.

But between those marquee matchups lies some very winnable games against some of the league’s lesser life forms, sinking the 49ers’ QB SOS to 13th.

San Francisco is a fave of a touchdown or more in four games in 2022, with Kyle Shanahan going 8-4 SU but just 3-8-1 ATS as TD-plus chalk during his time by the bay.

Starting Trey Lance is a high-risk, high-reward decision in comparison to Jimmy G, a player where you know what you're going to get. I’m betting on Kyle Shanahan and this loaded skill position group succeeding with Lance under center.

If you like any San Francisco futures bets, get those in before the 49ers’ opening pair of games. According to the lookahead lines, the Niners should have no trouble with Chicago and Seattle to start 2022, and blowout wins will quickly chew up whatever value is left in those markets.

The Week 1 opener in the Windy City has already climbed from San Fran -6.5 to -7 at some books. The total is a low 42 points as oddsmakers don’t have the same high hopes for these second-year QBs as their teams do.

The home opener sees a less “DangerRuss” Seattle squad visit as a 9-point underdog in Week 2. The Seahawks will be coming off an emotional Monday matchup with Denver and the former face of the franchise, leaving a short week to prep for San Francisco’s systems. Shanahan went just 2-8 SU (4-6 ATS) vs. the former version of Seattle.

We finally get to see what the 49ers (+2.5) are made out of when they go up the mountain to play Russell Wilson and the Broncos on Sunday Night Football in Week 3. This defense has plenty of tape on Wilson, but this Denver attack is a different beast.

Shanahan has held his own against AFC opponents during his time in San Francisco, with a 13-8 SU and ATS record in non-conference competition in the regular season.

We alluded to this spot above as well as the Niners’ home-friendly home stretch. San Francisco ditches a road game for a neutral-site showdown with the Cardinals south of the border.

The Estadio Azteca will present its own challenges to both teams, namely the thin air at 7,200 feet above sea level. The altitude could, however, give San Francisco an edge as Arizona will be playing its second straight game away from home and third travel tilt in four weeks.

The Cardinals travel to Minnesota in Week 8, host Seattle in Week 9, visit the L.A. Rams in Week 10, then head Mexico way for this Week 11 showcase (note: the Cardinals don’t get a bye until Week 13).

San Francisco rests up with a bye in Week 9 and hosts the L.A. Chargers on Sunday night in Week 10 before this Monday Night Football game in Mexico City. The spread ranges from 49ers -1.5 to -2.5.

San Francisco finished 8-9 Over/Under in the regular season and went 0-3 O/U in the playoffs in 2021-22, posting a 1-7 O/U count in their final eight games overall.

The 2022 totals are relatively low, with oddsmakers banking on a ton of run and stout defense to keep scores down. However, if all those good things about Lance coming out of camp are valid, this Niners attack will improve greatly from a team that finished middle of the road in terms of yards per point.

An uptick in passing downfield with an increase in air yards and pace of play gives value to the Over. On top of that, the 49ers' secondary is a soft spot and is dealing with injuries this summer. San Francisco was just 23rd in EPA allowed per dropback in 2021 and faces plenty of potent pass games in the final three months of the calendar.

Samuel caught six passes for touchdowns in 2021 and saw his targets take a tumble when the offense started leaning heavily on him to carry the ball. With Lance expected to add a rushing element at QB and the 49ers’ running backs room healthy (for now), Samuel won’t be as crucial to the ground game.

During his trade request drama this offseason, Samuel voiced his displeasure with how he was being used and the extra wear and tear from running the ball isn’t the wisest way for the 49ers to spend the $71.55 million extension they gave Deebo this offseason.

He’s already been Lance’s favorite target in exhibition and practice reps. With a return to traditional WR work, I like him to get at least seven touchdown catches — which comes at a tasty +120 at PointsBet books.

Given Kyle Shanahan’s betting track record, the best way to have wagered on San Francisco games was to fade the favorite — a 62.5% ATS money maker.

In short, point spread favorites are just 30-50-1 ATS (37.5%) in regular season games involving the 49ers since 2017. I’m cautious of how high the Niners’ spreads are now and early-season success will only inflate those further.

49ers' games as a pick'em or underdog