Jacksonville Jaguars Odds, Predictions, and Betting Preview 2022: Jags Get Their Claws Out

Urban Meyer's incompetence resulted in a lost 2021 not only for the Jacksonville Jaguars but No. 1 pick Trevor Lawrence, too. With an adult at the helm in new HC Doug Pederson, our Jags betting preview outlines just how competitive they'll be in 2022.

The Jacksonville Jaguars were ready to take a big step forward last season but ultimately plunked themselves down on a barstool and let the rest of the NFL grind’em down to just a 3-14 record.

The Urban Meyer experiment will go down as one of the biggest coaching flops in pro sports. On the bright side: it led the franchise to new head coach Doug Pederson.

The former Super Bowl winner is an ideal contrast to Meyer and a great fit, known as a “player's coach” with experience at every level, including as a pro quarterback. That will work wonders for former No. 1 overall pick Trevor Lawrence, who got a sideways entry into NFL life.

Is it safe to be optimistic about the Jags? Find out in our Jacksonville Jaguars 2022 betting preview.

The Jaguars were a sleeper among sharp bettors last summer, but Meyer quickly quashed those opinions. Optimism is once again rearing its ugly head in Jacksonville, with the Jaguars’ win total jumping from 6 (Over -120) to 6.5 (Under -130) across the futures markets this summer.

Jacksonville’s strength of schedule in the opening seven weeks sets them up for success — depending on how quickly this offense gels — and the AFC South overall is entering a down year, with the Colts on another QB, Tennessee bound for regression, and Houston being Houston.

Honestly, the key to getting Over six wins is taking both games against the Texans, which may not be as simple as it sounds (see Spot Bet below). Those betting the Over, buckle up: Win No. 7 will likely come down to the final two weeks of the season (at Houston and vs. Tennessee).

What will win bets: Coaching

You almost have to take much of 2021 and toss it in the trash when it comes to capping the Jaguars. Sure, Meyer was shown the door after going 2-11, but it wasn’t the win/loss record that got him fired. It was the piles and piles of horse shit he heaped on this franchise.

Pederson is perhaps the best coaching hire in 2022. His experience, preparation, and style, along with existing talent and Jacksonville’s offseason additions, are already shifting the culture in limited OTAs.

Before they even stepped on the field, the Jags were behind the eight ball from a strategy standpoint every week under Meyer. Pederson and defensive coordinator Mike Caldwell bring order, experience, and accountability to both sides of the ball.

What will lose bets: Growing pains

This is the third head coach for Jacksonville in three years and you could argue that the 2021 season was detrimental to the progression of the Jags’ youngsters, leaving Pederson to pick up the slack left by the former coaching staff.

The offensive line has plenty of new faces and switches to a wide zone blocking scheme. Lawrence has a new group of receivers to gel with, and the defense anchors itself in the 3-4 after running some hybrid nonsense in 2021.

The opening eight weeks of 2022 has the Jaguars racking up the frequent flyer miles, sending Jacksonville on the road in five of the first eight games, concluding with the annual overseas stop in London in Week 8.

Jags went 5-12 ATS last year, were favorites only twice (both games with Houston), and caught more than four points in 11 of their 17 games (4-7 ATS). The 2022 lookahead lines have Jacksonville at least equalling its three wins from last season but bookmakers also have some tighter spreads on tap, with five games in the +4 and shorter range.

One thing I did notice when sizing up the Jaguars’ spreads from the late spring vs. lookahead lines released later in the summer: oddsmakers are a little more bullish on Jacksonville’s power rating — at least in the first half of the schedule. The Jaguars are out there as bigger faves and shorter dogs in that span.

We’ve seen a lot of Year 2 quarterbacks take leaps, and I could see Lawrence being the next. It would not stun me if Jacksonville ended up finishing second in the AFC South.

As mentioned, the early season slate keeps Jacksonville living out of a suitcase, with three road games in the first four weeks — headlined by Pederson’s return to Philly in Week 4. That’s not always a bad thing with plenty of new faces, as the travel keeps the team together and helps builds comradery.

Another NFC East foe waits in Week 1, with Pederson very familiar with Washington QB Carson Wentz. Jacksonville is available between +3.5 and +4, depending on where you bet. The Jags were a winless 0-8 SU on the road with a 2-6 ATS mark as visitors in 2021.

Week 2 has a “master vs. student” matchup when Pederson takes on protégé Frank Reich and the Colts at home (+4.5). This is also a huge revenge spot for Indianapolis after having its playoff hopes dashed by Jacksonville in the season finale, carrying around the albatross of a 26-11 loss as 14-point chalk all offseason.

Bookies are bouncing between Jaguars +9 and +10 for a cross-country trip to La-La Land to play the Chargers in Week 3. Justin Herbert is by far the best QB this defense will face in the opening seven games and that compounds a possible lookahead spot to that Week 4 date with the Eagles.

The Jaguars lost both meetings with the Texans in 2021 and run the risk of letting those “gimmies” slip away in 2022, thanks to two slick schedule spots for these AFC South showdowns.

First, Jacksonville is ripe for a letdown coming off its road trip to Philadelphia to avenge Pederson’s hurt feelings in Week 4. The Jags are laying as many as four points for this divisional game and are 0-5 SU and ATS as favorites since 2018.

The second spot to watch is a date at Houston in Week 17 (-1). This will be Jacksonville’s fourth road game in five weeks and while it does get an extended break after visiting the Jets on Thursday in Week 16, this game lands on New Year’s Day. Depending on where the Jaguars sit at this point, the 1 p.m. ET kickoff could come really early for those guys ringing in 2023 the night before.

Jacksonville ranked 19th in my QB strength of schedule rankings and the bulk of the elite passers faced will come in the second half of the season. The opening seven weeks, however, sees Herbert and the Chargers stand above a QB carousel that also features Wentz, Matt Ryan (twice), Jalen Hurts, Davis Mills, and Daniel Jones.

Caldwell inherits plenty of potential with a defense that was mismanaged in 2021, most notably studs Josh Allen and No. 1 overall pick Travon Walker at linebacker, who will blossom at Caldwell’s specialty. The Jaguars drafted hard and spent big to bolster this stop unit and the defense has a chance to shine early on, considering the competition.

As for the offense, Lawrence has more around him but still needs to play catch-up after a lost year under Meyer’s staff. You have new pass-catchers in Christian Kirk, Zay Jones, and TE Evan Engram, and the awaited debut of RB Travis Etienne.

This is a promising group, but it will take time to come together, leaving the door open for early-season Unders in Jaguars games. The team finished 5-12 Over/Under in 2021 with a 2-11 O/U count in the first 13 games of the season.

Pederson made Wentz into a 4,000-yard passer during this tenue in Philadelphia and it’s not too much to ask of Lawrence to build on his 3,641 yards from last season.

Lawrence made plenty of rookie mistakes in 2021 but to his defense, the Jaguars’ targets dropped 33 balls and the receivers had more crossed wires than “Johnny 5” (showing my age). This time around, the Clemson Golden Boy has better skill positions around him and an improved offensive line giving him time to make plays.

If we’re leaning on last year’s passing defense DVOA, only three of Jacksonville’s 2022 foes finished better than 15th in that advanced metric (Cowboys, Titans, and Giants) while the rest ranked out 19th or worst. With Pederson by his side, the road to 4,000-plus yards is clear.

Anyone jumping into the Jaguars’ season wins total market will be biting their nails in the home stretch of the schedule, especially with four of the final six games away from home and the team’s history in late-season road trips.

Under former coach Doug Marrone, Jacksonville was 2-8 SU and 4-6 ATS in road games between Week 13 and Week 17. Urban Meyer can take part of the blame for a 0-4 SU and ATS mark in away games from Week 13 on last season, as he was axed before Week 15.

If Pederson really wants to flip the script in North Florida, he’ll have the Jags finishing strong. The late schedule throws four road games in five weeks at the Jags but it features some fellow bottom feeders. 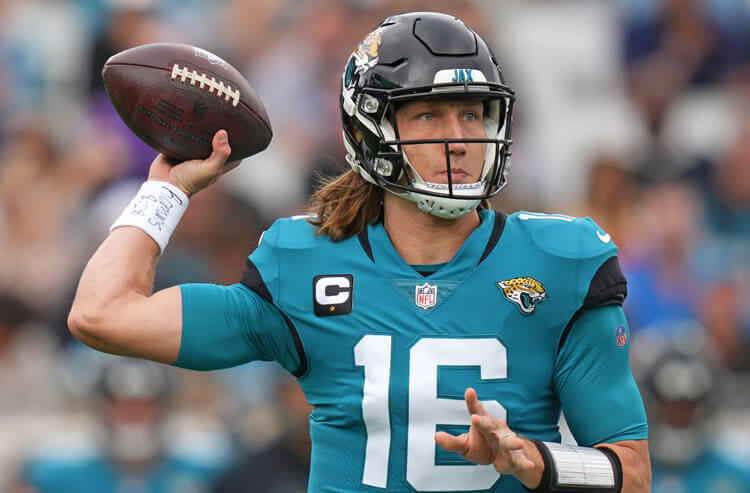 Jacksonville Jaguars Odds, Predictions, and Betting Preview 2022: Jags Get Their Claws Out
Provided by