Lamar Jackson is already well on his way to being the most accomplished dual-threat QB in NFL history, and he has wreaked havoc on defenses. It hasn't all been good news, however, as we break down in our team-by-team record look at Lamar.

Lamar Jackson is far from your typical NFL quarterback, but that's not to say he hasn't made his mark on the position in just a few short years in the league.

As one of the most dynamic dual-threat QBs the sport has ever seen, Jackson has a playmaking ability that makes even the best defensive coordinators break out in a cold sweat.

That talent helped him land MVP honors in 2019 — becoming only the second to do so by unanimous vote (Tom Brady, 2010) — after throwing for over 3,100 yards and 36 touchdowns and adding another 1,200 yards and seven TDs on the ground.

He's spent his early years with the Baltimore Ravens in a consistently competitive AFC North division — let's see how he's stacked up in our team-by-team breakdown below.

Jackson vs the Cincinnati Bengals

A handful of Lamar's most noteworthy moments as a Raven have come against the division rival Cincinnati Bengals.

He wrote some history against the Bengals during his 2019 MVP season, becoming the first player to throw for 200 yards and rush for 150 in a regular-season game. Here's what Bengals coach Zac Taylor had to say about the eye-popping performance:

Lamar Jackson is the first player in NFL history with 200+ pass yards and 150+ rush yards in a regular season game. "He's an elite athlete. We've played a couple good athletes, (but) he's one of the rarest I've ever seen in person." - #Bengals coach Zac Taylor

In 2020, Jackson crossed the 1,000-yard rushing threshold in a Week 17 matchup with the Bengals, making him the first to do so in multiple seasons.

Due to injury, Lamar played in just one of the two matchups last season — a 41-17 rout for the Bengals — but remains 5-2 against the Bengals for his career.

Jackson vs the Pittsburgh Steelers

Despite being in the same division for nearly four full seasons, Jackson has actually only suited up for three games against the Pittsburgh Steelers to the tune of a 1-2 record.

He sat out a Week 17 matchup in 2019 (rest), was sidelined for the second meeting in 2020 thanks to COVID-19, and missed another thanks to injury this past season.

Jackson's otherwise struggled against the stout Steel City defense, throwing just four touchdowns against six interceptions in those three divisional showdowns. The lone win came in overtime fashion back in 2019.

Jackson vs the Kansas City Chiefs

Jackson has asserted himself as one of the great young quarterbacks in the NFL. Headlining that group is Patrick Mahomes, who Lamar has had a handful of run-ins with during his career.

The 2018 and '19 MVPs have played four times, with Mahomes getting the better of Jackson in each of the first three meetings. However, Lamar got his revenge in Week 2 last season, totaling 346 yards and three touchdowns — two coming on the ground — en route to a shocking 36-35 victory over the  Kansas City Chiefs.

With no regular-season matchups lined up for 2022, we can only hope for these two electrifying QBs to butt heads in this year's AFC playoffs.

Jackson vs the Cleveland Browns

The third and final divisional foe on our list is one Jackson has found much more success against: the Cleveland Browns.

He carries a 5-2 record into 2022, with the highlight being a 2020 Monday Night Football tilt that saw Jackson run for 124 yards, an MNF record. He left the game in the third quarter due to leg cramps, allowing Cleveland to erase a 14-point deficit.

Jackson returned late in the fourth quarter on a fourth down and connected with Marquise Brown on a 44-yard touchdown pass, sealing a wild 47-42 primetime victory.

Jackson vs the Tennessee Titans

Jackson's success — or lack thereof — in the playoffs has been well-documented. He's played four games to an uninspiring 1-3 record, with two of those matchups coming against the Tennesse Titans.

Despite its 14-2 record in 2019, Baltimore fell flat on its faces against the Titans in the Divisional Round. Lamar combined for over 500 yards of offense, but much of it came from behind in what was ultimately a 28-12 gut-punch of a loss.

However, the Ravens returned the favor a year later with a 20-13 victory in the AFC Wild Card Game. Jackson dominated on the ground, running for 136 yards and a touchdown. That remains his only playoff triumph through four seasons, as the Bills limited Lamar & Co. to just three points a week later. 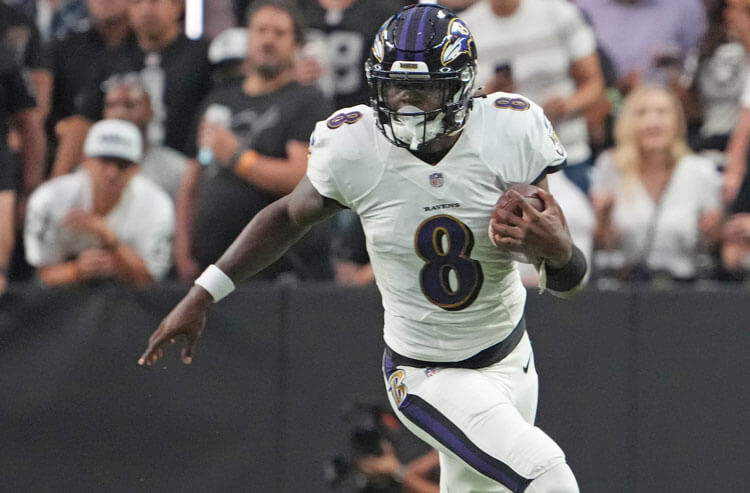 Lamar Jackson's Record Against Every NFL Team
Provided by