There's a new regime in Atlanta, with a new head coach, GM, and star pass catcher in the fold around longtime franchise QB Matt Ryan and No. 1 WR Calvin Ridley. So how do you profit off the Falcons in 2021? Find out in our ATL betting preview.

A four-win season prompted the Atlanta Falcons to clean house, replacing the coaching staff and the GM heading into 2021.

Arthur Smith is the new head coach, inheriting a veteran quarterback in Matt Ryan that consistently sits among the Top 5 in passing yards season after season. It all sounds great before considering the doldrums of the defense — or the fact that this franchise seems cursed to collapse late in games.

Can bettors back Smith as the guy to break the spell and get the ATL back in the black?

Find out in our 2021 Atlanta Falcons NFL betting preview.

The canning of head coach Dan Quinn and GM Thomas Dimitroff was a step in the right direction of killing the collapsible culture this franchise has had hanging around its neck since the infamous 28-3 fiasco in Super Bowl LI.

The hiring of Smith is another step. He’s a promising young coach with an offensive system that flows the way the NFL is evolving, though he doesn’t have all the parts to make that motor sing in 2021.

While Atlanta won only four games in 2020, many point to the 10 one-score games Atlanta played in as a sign of optimism, losing eight of those squeakers. Even if the Falcons flop to a 2-4 record in the NFC South, there’s wiggle room to get Over the 8-win number.

What will win bets: Passing offense

“Matty Ice” still has some coolant coursing through his veins and the Falcons are hoping a switch to Smith’s offense can keep Ryan producing in the passing game. The guy hasn’t thrown for less than 4,000 yards since 2010 and he’s played all 16 games in all but two of his 18 years in the pros.

Smith’s trademark pre-snap motion will utilize Atlanta’s youthful receiving targets such as Calvin Ridley, Russell Gage, and top draft pick (and projected TE god) Kyle Pitts. The one hang-up is that the play-action won’t work as well as it did during Smith’s tenure in Tennessee, because no one fears the Falcons’ running game like it did Derrick Henry.

That said, Atlanta is expected to return to the good ole days of scoring a butt-ton of points. If you’re into NFL season specials, the Falcons are priced at +2,800 to lead the league in scoring this season — a serious value grab if you don’t mind tying up money for that long.

The more things change, the more the Falcons suck ass at defense. It appeared Atlanta’s stop unit might have found its stride in the back half of 2020, putting the clamps on offensive juggernauts like New Orleans, Las Vegas, and Kansas City... But it’s back to Square 1 with new defensive coordinator Dean Pees.

The problems start in the trenches, where the Falcons fall short on talent and bring less heat than a one-year-old’s birthday cake. Atlanta registered only 29 sacks last season and was dead last in passing yards allowed (293.6 per game). That inability to slow the throw led to late-game collapses, with ATL getting outscored 9.4 to 6.5 in the fourth quarter — the death knell for football bettors.

Atlanta is a favorite in seven games this season, with a pick’em posted for a Week 12 jaunt to Jacksonville, laying a field goal or less in four of those contests.

The Falcons, who walk into the 30th-ranked schedule in SOS (.454), are getting points in the nine remaining games, including seven spreads of +3.5 or higher and six of those come away from home.

In six years under former coach Dan Quinn (including the 11 games after he was fired in 2020), Atlanta failed to make the most of those points with an 8-10 ATS count when getting more than a field goal in the regular season.

The Falcons have a thorn between two potential roses to open the 2021 campaign, with the defending champion Buccaneers in Week 2 bookended by a pair of NFC East foes: vs. Philly in Week 1 and at New York in Week 3. That September set-up should help this new coach and new systems sink in.

The Falcons are laying 3.5 points in a Week 1 “Battle of the Birds” versus an Eagles side in the midst of a transition in coaching staff and QB. Atlanta has a history of strong home openers, going 11-2 SU and ATS in those spots since 2008, but are just 3-2 SU/ATS in home openers the last five years.

A trip to Tampa to take on the champs brings with it a near-double-digit spread, with oddsmakers giving Atlanta 9.5 points. The total for this NFC South showdown is pretty big as well, with the lookahead line set at 52 points. The Falcons and Bucs have pumped out profits for Over bettors in recent seasons, going 9-3 O/U (75% Overs) in their last dozen head-to-head meetings.

Atlanta plays its second straight road game in East Rutherford in Week 3, getting 2.5 points from the host Giants in what books believe will be a tight one. The Falcons were 2-8 SU in one-score games last season but own a 9-6 ATS record when set as an underdog of less than a field goal the past six seasons.

Atlanta is going to have a nice collection of tiny shampoo bottles and mini toothpastes by the time it moseys into Dallas for a Week 10 date with the Cowboys. This will be the sixth away game in an eight-game stretch between Week 2 and Week 10 (with bye in Week 6), including a Week 5 trip to London, England.

Even on the other side of the bye, this will be ATL’s third road game in four weeks and the second of a back-to-back after visiting New Orleans for a key divisional game in Week 9. The current spread is sitting at the dead number of +4.5 but should that road-heavy sked get the best of the Falcons, expect this one to quickly jump to +5.5 or +6.

The Falcons finished 7-9 Over/Under in 2020 but really went on an Under tear after Quinn got canned, going 3-7 O/U in the final 10 games of the year.

Atlanta also leaned heavy to the Under away from home, posting a 2-6 O/U count as a visitor, as the Falcons offense managed an average of only 23.4 points per road game.

That attack will improve in Smith’s schemes and the 2021 lookahead totals enforce that, with 15 of 17 numbers sitting at 48 points or more. That includes five totals of 50 or higher — the Falcons went 21-17-1 O/U against totals of 50-plus under Quinn.

Ryan has plenty of pop left in his arm (4,581 yards last year) and if Smith can work the same magic he did with Ryan Tannehill in Tennessee, the Falcons QB will flourish. Ridley is more than ready to be a No. 1 WR, taking those reigns from the departed Julio Jones, and Pitts is being touted as the next Tony Gonzalez, who thrived alongside Ryan in the back half of his career.

The rushing attack doesn’t have the punch that Smith had with the Titans, so you can expect the bulk of snaps to end up in the air. And with the defense in rebuild mode and susceptible to the pass, Atlanta will be playing catch-up most Sundays... which means Ryan will have the green light to let it rip.

We talked about coach Smith and new GM Terry Fontenot changing the culture in Atlanta. And a big part of that will be flipping the Falcons’ fortunes versus AFC opponents.

The team did go 3-1 ATS versus AFC foes in 2020 — all coming after Quinn was fired, so perhaps they’re on the right track. However, Atlanta is still a baffling 17-28 ATS (38%) in non-conference clashes since 2010. The Falcons have dates with four AFC East members and the Jaguars in 2021. 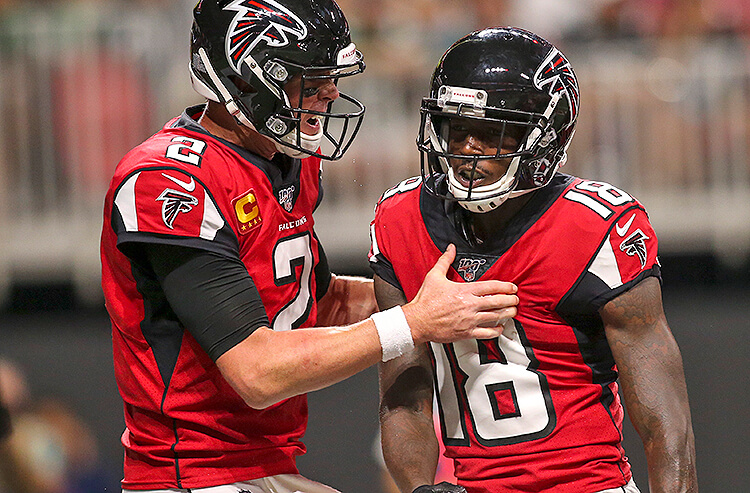 Atlanta Falcons 2021 NFL Betting Preview: Will A New Regime Change the Culture in Atlanta?
Provided by