Despite a strong defense and an ever-so-slight upgrade at quarterback, too many things need to go in Carolina's favor for the Panthers to get back into the mix. So how do you approach this Baker-led squad? Find out in our Carolina Panthers betting preview.

The Carolina Panthers could have the pieces to make a move in the NFC South. That’s a pretty loaded “could”, though.

A deep young defense is the backbone of this team, but questionable coaching, a star running back made of tissue paper, and the curious quarterback case of Baker Mayfield has divided bettors on the Panthers’ potential. At least Carolina’s NFL odds are projecting progress from its five wins in 2021.

Should football bettors keep pounding the point spreads considering this team was the worst bet in the NFC at 5-12 ATS last year? We find out in our Carolina Panthers 2022 betting preview.

The lookahead lines for 2022 have at least three wins in store for Carolina and a number of other games could come down the wire, considering five other contests have spreads parked between +1 and +2.5. If the defense keeps progressing, seven wins is not a pipe dream and might be enough to keep head coach Matt Rhule around.

That said, getting to seven wins requires a lot of those “ifs” and “shoulds”. Like “should” Baker Mayfield not suck. “If” Christian McCaffrey stays healthy. And “should” Rhule not get canned before Halloween.

The Panthers’ standard strength of schedule sits in a tie for 12th, with a nasty middle of the calendar, and while their QB SOS ranks out 20th, it does feature the likes of Tom Brady (twice), Kyler Murray, Matthew Stafford, Joe Burrow, Lamar Jackson, Russell Wilson, and (possibly) Deshaun Watson.

Carolina opened with a season win total of 6 (Under -125) but jumped half a win to 6.5 after the Mayfield trade. While his ceiling is higher than Darnold’s – IMO – is Baker going to single-handedly win a game for the Panthers this season?

The Panthers' stop unit wore thin as 2021 marched on, as the offense sputtered and left the defense to play extra minutes, leading to key injuries, but given even moderate support on the scoreboard, Carolina has one of the most promising young defensive units in the NFL, with rich depth charts on the line and in the secondary. If this unit can continue to mature – along with some nice additions in experience – it will allow bettors to hang with the spread most weeks.

The X-factor will be game-changing plays. The Panthers were declawed when it came to sacks and takeaways last season. They forced only 16 total turnovers and registered 39 sacks despite ranking seventh in pressure rate. Carolina sits 20th in my QB SOS this season and while it does face some elite passers, there are plenty of crappy QBs on the calendar for this secondary to exploit.

What will lose bets: Coaching

What a difference a year makes. I highlighted Carolina’s coaches in its 2021 preview, giving a tip of the cap to Rhule for keeping things competitive in his first season and pumping up Joe Brady’s offense in Year 2. Flash forward, and Brady didn’t even make it out of December while Rhule is the betting favorite to be the first head coach fired in 2022.

There’s plenty of pressure from up high to win, especially after landing Mayfield. And speaking of such, new offensive coordinator Ben McAdoo doesn’t hold Mayfield in the highest regard, going back to the 2018 draft. This is Baker’s fifth head coach and fifth OC in five seasons in the pros. If Carolina stumbles out of the blocks, owner David Tepper won’t hesitate to show Rhule the door.

The schedule lords did Rhule and Carolina a favor in the first third of the season, with four of the opening five games coming at home, including the most interesting matchup on the Week 1 slate: vs. Cleveland. That Baker Mayfield revenge game has seen some major line movement in the lookahead markets, as Deshaun Watson’s suspension looms large.

In a strange twist, three of the Panthers’ first four foes could be playing without their biggest offensive weapon: Watson likely out for the Browns, Alvin Kamara possibly suspended for the Saints, and DeAndre Hopkins suspended six games for the Cardinals.

Despite that soft opening, Carolina is a favorite in only two games with two pick’ems on the board, depending on the book. That pans out to a projected three wins. There are five other games with spreads of Panthers +2.5 or shorter – four of which come at home. Carolina is a dismal 4-12 SU and ATS as a host under Rhule, including 2-6 SU/ATS inside Bank of America Stadium last season.

Carolina has an underrated defense and skill position players. If they can just get average play from the quarterback and offensive line, this is a team that could be playing for a Wild Card berth. That is a big IF, however.

Last year, the Panthers won three of their total five games in the opening three weeks of play (3-0 ATS) but benefitted from a very advantageous schedule: vs. Jets, vs. hurricane-displaced Saints, at Houston.

From there, the markets overcorrected to Carolina’s 3-0 start, the offense sucked, and the team would cover just two more times all year. The 2022 slate isn’t as soft but the lookahead lines aren’t counting Carolina out.

Week 1 is a game that got really intriguing when Mayfield made the move to Carolina. The Panthers opened as 4.5-point home underdogs to Cleveland but with Watson’s suspension coming down the pike and then the addition of the Browns' former QB, Carolina has trimmed to +1 at those books still hanging a spread.

The Panthers head to New Jersey to face the Giants in Week 2, with this spread between PK and +1. Revenge games don’t hold much water in the pros, but Carolina was embarrassed by New York last year, losing 25-3 at MetLife. This matchup also holds weight with McAdoo, the former Giants head coach.

Carolina (+2.5 to +3) comes back home for a classic NFC South rivalry with the Saints, who could be without Kamara due to suspension. These divisional foes had a long history of Over results, but those trends sailed with Drew Brees. They went Under in both meetings last year and this 41-point total is the shortest Over/Under of the entire 2022 season, according to the lookahead lines.

The home-friendly start to the schedule comes back to bite the Panthers midway through the year when the franchise faces four of six games on the road between Week 6 and Week 11. This nasty run culminates in Baltimore, where Carolina is currently catching a touchdown on November 20.

Things get very prickly in the middle of that stretch when the Panthers play three road games in four weeks. They travel to L.A. to take on the Rams in Week 6, come back home to battle the Bucs and have a letdown spot waiting in Atlanta before finishing up at Cincinnati as big as +8.5 underdogs on Nov. 6.

The Panthers are 15-18 Over/Under in Rhule’s reign and work in a brand-new offense under McAdoo. How Mayfield fits into that playbook remains to be seen. McAdoo isn’t known for misdirection, steering away from pre-snap motion and play-action. His past systems thrive on quick hits and timing from the QB, so it could take a while to gain traction.

Carolina’s defense did a good job keeping foes in front of them, limiting the amount of big passing plays and checking opposing quarterbacks to 9.7 yards per completion (eighth lowest). The run defense suffered due to injuries at the end of the year but overall was Top 10 in EPA allowed per run and rush success rate.

Six of Carolina’s first seven opponents ranked Top 11 in defensive DVOA at Football Outsiders in 2021, so any growing pains with this offense and QB transition will have to be mitigated by the defense. That smells like early-season Unders to me.

Considering the state of their QB room, the Panthers beefing up their offensive line with draft picks and signings is like building a multi-million-dollar garage to protect your collection of 1995 Toyota Tercels, but those improvements were much needed and will help Baker Mayfield manage pressure in 2022.

McAdoo’s offense wants the ball out of the quarterback’s hands quickly and utilizes short passes, which will also limit the amount of trouble Baker can get into. On top of that, Mayfield likely has a short leash when it comes to mistakes and McAdoo has full control to yank him in place of Darnold or rookie Matt Corral. So even if he stinks, Baker may not get a chance to push 14 INTs.

In two years with Rhule on the sideline, the Panthers are just 3-9 SU and 4-8 ATS vs. NFC South competition. That includes a 1-5 SU and ATS mark (2-4 O/U) in divisional home games in which Carolina owns an average margin of -12. 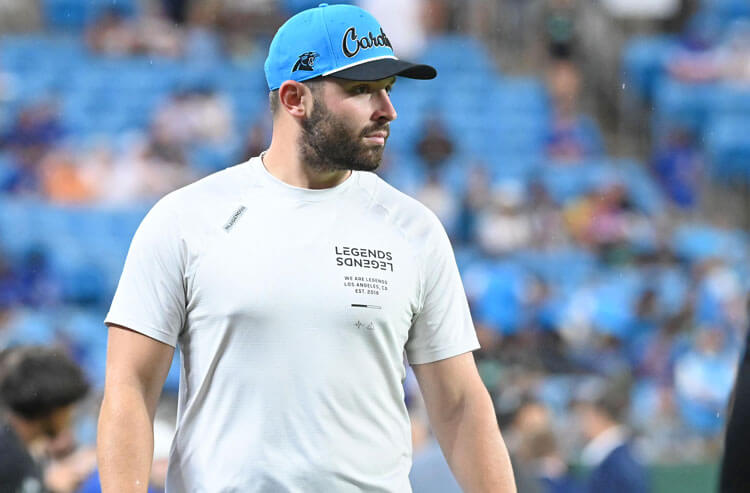