If You Like the Buccaneers, Here Are 5 Bets to Make

We're less than a week away from Super Bowl LV between the Kansas City Chiefs and Tampa Bay Buccaneers on February 7.

The Chiefs are the defending champions and have stayed at the top of the Super Bowl odds board all season so it's no surprise that they enter as favorites.

However, the Bucs are the first team to play at home in the Super Bowl in NFL history and have six-time SB winner Tom Brady leading the way. If you refuse to bet against the GOAT and think the Bucs will win, consider these five TB prop bets this Sunday.

When these teams met up in Week 12 earlier this season the Bucs lost by a score of 27-24, largely due to an awful first quarter which saw them fall into a 17-0 hole.

Slowing down the Chiefs in the early going and getting a few big defensive stops will be key for Tampa Bay's momentum. That means even if the score is tied at 0-0 after the first five minutes of the game, the Bucs could feel like they have the psychological edge.

If you saw Kansas City trail 9-0 at the end of the first quarter against the Bills in the AFC Championship game, you probably saw a Chiefs comeback from a mile away. After all, this is a team that fell behind in each of their three playoff games a year ago before comfortably pulling away for a victory.

If the Bucs want to be in a position to win this game they need to finish strong and that means outscoring the Chiefs in the second half. Thankfully for TB bettors, the Bucs have a tendency to do just that.

Tampa Bay is second in the league in scoring during the second-half of games with 15.1 points per game, while ranking fifth in the NFL in second-half scoring defense by holding foes to 9.3 ppg.

If you think the Bucs will be celebrating at the end of the game, think about backing them at +118 on the second-half moneyline.

Of course, the biggest narrative in this game is the matchup between the GOAT Tom Brady and arguably the best player in the game right now in Patrick Mahomes. As Mahomes pretty much always does his thing – attacking downfield with surgical precision – Brady will have to be able to fire on all cylinders for the Bucs to keep pace.

While Brady struggled to throw the ball in three games against the Saints this year, he consistently had big games through the air against other teams in the league. Brady finished the regular season by throwing for more than 340 yards in five of his last seven games, including a 345-yard performance against the Chiefs.

The Chiefs rank a modest 16th in the league in pass defense DVOA and Tampa Bay head coach Bruce Arians will look to take advantage of that.

Also, keep in mind that Brady has had some big passing games in recent Super Bowls. While he passed for a mehtastic 262 yards in his last Super Bowl against the Rams, he threw for 328, 466, and 505 yards in his three Big Games prior.

The Chiefs suffered a big blow in the AFC Championship when they lost left tackle Eric Fisher to a torn Achilles' tendon. The Pro Bowler is their best pass blocker and Kansas City will miss him against a fierce Tampa Bay pass rush. The Bucs finished the season tied for fourth in the league with 48 sacks while ranking second in QB pressures.

Jason Pierre-Paul led Tampa Bay with 9.5 sacks during the regular season and picked up two sacks in the NFC Championship when he abused Packers left tackle Billy Turner, who had stepped in for Green Bay's own injured Pro Bowl left tackle David Bakhtiari.

The Bucs pass rush will need to pressure Mahomes if they want to win and that starts with guys like Pierre-Paul, Shaq Barrett and Devin White.

With Pierre-Paul usually lining up on the edge across from the left tackle, we like his +140 odds of getting to the Chiefs QB.

With all the attention being paid to the great quarterbacks and passing games for both teams, success on the ground will be an X-factor to keep an eye on.

Tampa Bay had the stingiest run defense in the league during the regular season, holding opponents to just 80.6 rushing yards per game and 3.6 yards per carry. Meanwhile, run defense was one of Kansas City's few weaknesses, with the Chiefs allowing 122.1 yards per game on the ground on 4.5 yards per rush attempt.

While Tampa Bay ranks just 27th in the league with 98.1 rushing yards per game during the regular season and playoffs, that number is a more impressive 110.4 ypg in their 14 victories.

Containing the Chiefs running game and establishing their own will be crucial for the Bucs in this game, so if you like them to pull off the upset, back them to total more rushing yards than KC. 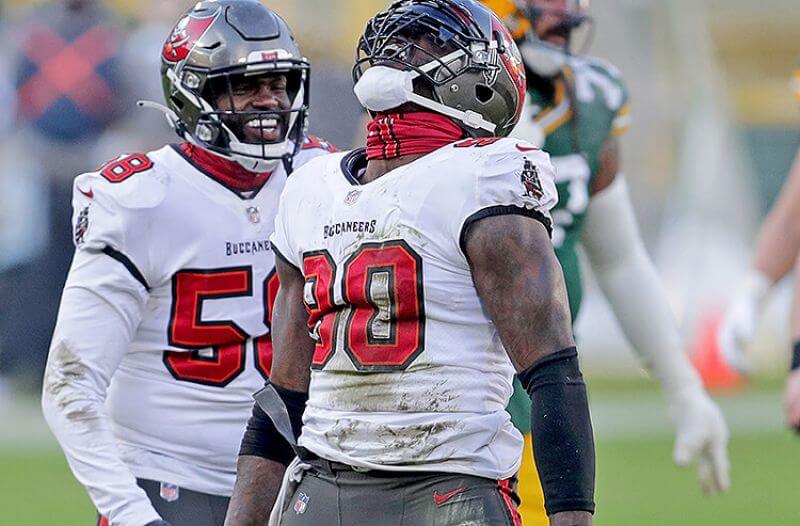 If You Like the Buccaneers, Here Are 5 Bets to Make
Provided by