The Buccaneers have won seven straight outings since a Week 12 loss to the Chiefs, covering in five of those games, including taking playoff wins as underdogs at New Orleans and Green Bay 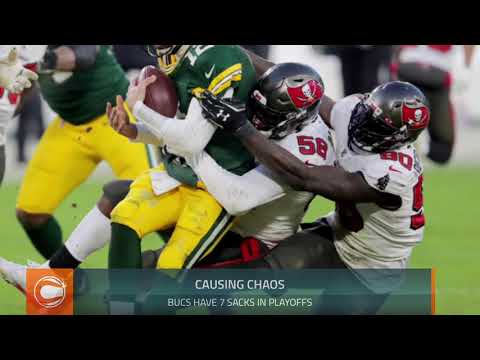 Based on my past Super Bowl picks and predictions, our final NFL Underdogs column of the season should come with a warning label like a pack of cigarettes or a Kinder Surprise Egg:

MAY BE HARMFUL TO YOUR BANKROLL!

For whatever reason, I’ve gone bust with my NFL betting picks for the Big Game. After having solid success against the spread in the regular season and throughout the playoffs, I’ve routinely stumbled on Super Sunday.

Last year, I was on the 49ers +1.5 (LOST). The year before that, Rams +3 (BARF). And when the underdog Eagles “Philly Special’d” their way into the win column in Super Bowl LII, I was actually on the Patriots -5 (even though the column is titled NFL Underdogs, if I don’t like the pup, I won’t pick it).

And it wasn’t just those spread bets either. I used to throw some bonus bets into these Super Bowl columns as well, looking at plus-money wagers or underdog props with the potential to pay out. And since these are based on a narrative set for the game, they went down with the ship as well.

In fact, my greatest Super Bowl betting triumph in recent seasons didn’t even play out on the gridiron, scoring “Yes, Justin Timberlake will cover a Prince song” during the halftime show of Super Bowl LII. That was a modest +140 payday – not quite enough to bring all those lost units back from the dead.

That leads us to Super Bowl LV...

It just so happens that I do like the dog in this year’s Big Game. I grabbed Tampa Bay +3.5 on the opening odds and felt pretty smart when the early movement slimmed that spread to a field goal. And now that the half-point hook is starting to bubble up again, I just may hit it a second time (check out my full Super Bowl LV betting rundown for full game-betting analysis).

It’s a bit ironic that, in a pandemic-stricken NFL season, in which home-field advantage has been worth about as much as stock in Ticketmaster, that we finally get our first team playing in the Super Bowl at its home stadium.

Home teams boasted a 133-134-1 SU record this year, mostly playing in empty venues, and went just 132-136 against the spread, with home favorites burning bettors to the tune of 44 percent ATS (48-61). But home underdogs were another story. Those teams getting the points on home soil (or rubber pellets) were 61-48 ATS – covering at a 56 percent clip.

Basing your Super Bowl bet solely on a season-long, league-wide trend is about as wise as blindly banking on the team wearing white to keep winning (white jerseys have won 13 of the last 16 Super Bowls, and Tampa Bay is wearing white on February 7. Just sayin’). But we’re dealing with the first home-field advantage in Big Game history (big or small, it’s still an edge) and a Bucs team that has covered in five of its eight contests inside Raymond James Stadium since adding Tom Brady to the roster (including a 27-24 loss to Kansas City as 3.5-point underdogs in Week 12).

Perhaps the most impressive stat Tampa Bay carries into Super Bowl LV (or at least it would be if the home-field edge wasn’t dulled by COVID-19) is that the path back to Raymond James featured three straight road wins. Only four other NFL playoff teams have won three straight roadies to punch their ticket to the Big Game: 1985-86 Patriots, 2005-06 Steelers, 2007-08 Giants, and 2010-11 Packers. The latter three went on to win the Lombardi Trophy and cover the Super Bowl spread.

Momentum is a money-maker in any postseason and Tampa Bay has it in spades. The Buccaneers have won seven straight outings since that Week 12 loss to the Chiefs, covering in five of those games, including taking playoff wins as underdogs at New Orleans and Green Bay to earn the NFC title. COVID crowds or no COVID crowds, that’s tough.

Compare that to Kansas City, which resembled a defending Super Bowl champ for the first time since Week 8 in the AFC title game. The Chiefs have covered only twice in that 10-game span and haven’t gone for the kill when they’ve had foes on the ropes.

If you take the logos off the helmets, Team A has won seven straight outings, covering in five of those contests with five games coming away from home, and a +13.71 average margin of victory versus an average point spread of -5.28.

Team B (taking out its Week 17 throw-away game) has six wins in a row, covered in only two of those contests with five of those coming at home, and an average margin of victory of +6.16 versus an average spread of -7.42.

Forgive me if I’m not rushing to the window to lay the 3.5 points with Team B because it finally won a game by more than one possession (also something that hadn’t happened since November 1 until the AFC title game). Just because Nick Cage does one good movie every 20 flicks doesn’t mean he’s a great actor.

I’m putting my bucks on the Bucs and Tampa Tom in Super Bowl LV. 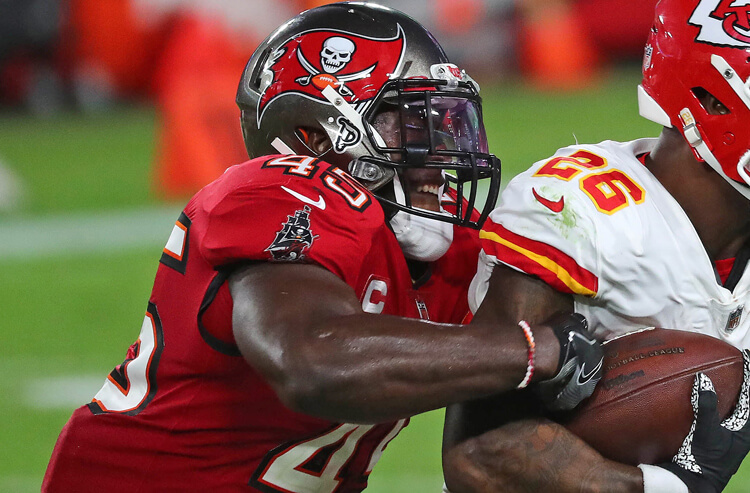 Despite COVID-19, Vegas Won Yet Again In Super Bowl 55
Patrick Everson | Feb 9, 2021
About Us
Contact Us
Careers
Our Team
Brand
Testimonials