Everything you need to know about Super Bowl squares including a guide on how to play and a free printable squares template for Super Bowl 56.

Get some competitive spirit at your Big Game party with our free, printable Super Bowl squares template. We have also put together a guide containing everything you need to either host, set up, or participate in a Super Bowl squares pool.

When the the teams are set, it's time to set up your Super Bowl squares pool. Covers will release a free template for you to download and print right here in this space. Below you can see our template for Super Bowl 56 in 2022 between the Los Angeles Rams and Cincinnati Bengals. 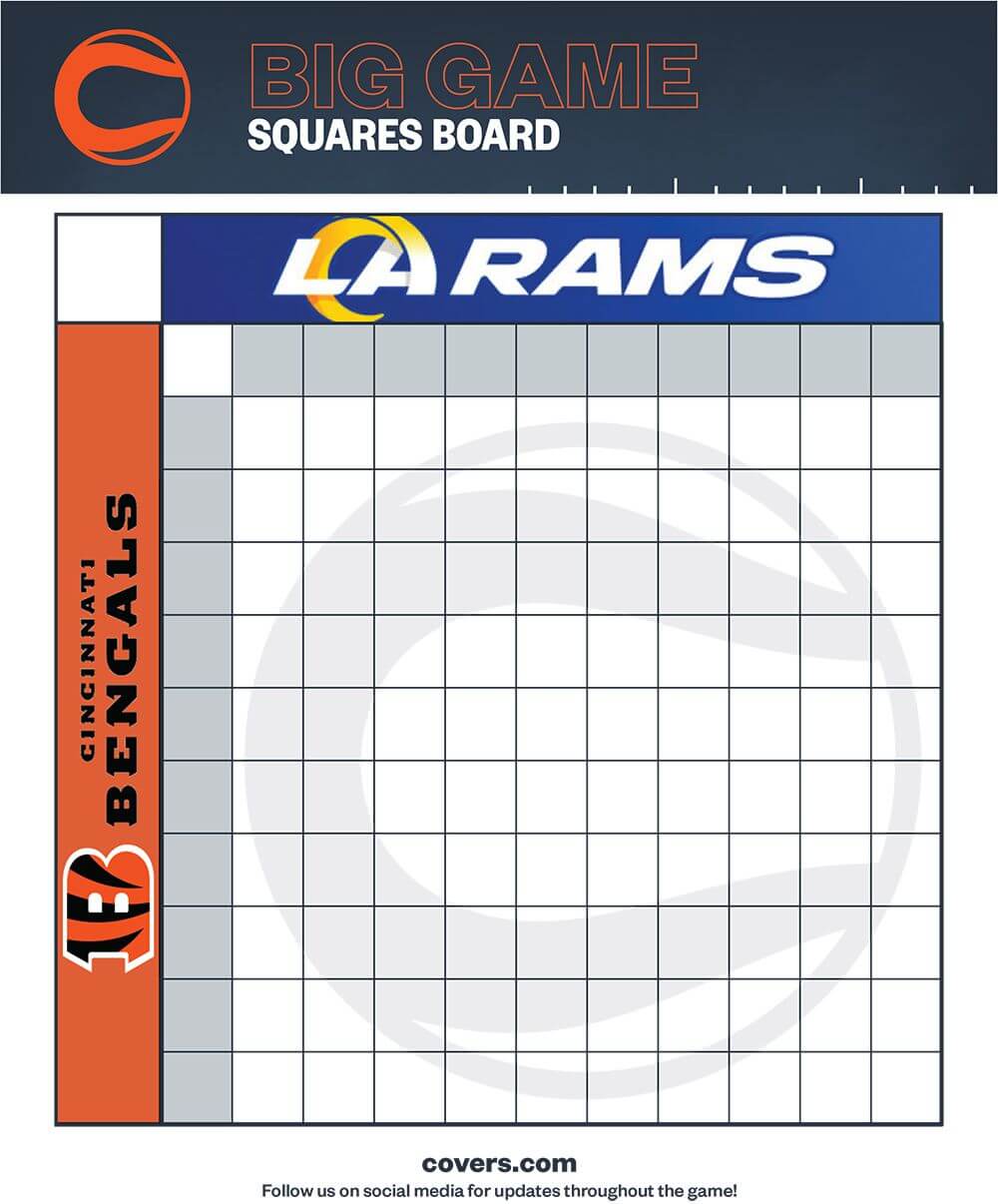 How does Super Bowl squares work?

Follow these simple steps to get your Super Bowl squares game started.

You’ll need a 10x10 empty grid, giving you 100 squares for people to choose from. We have done this work for you with our printable Super Bowl squares template.

Now you’ll take one team and assign it to the rows. The other team will be assigned to the columns. Our printable template has already assigned the teams for you.

Decide on the stakes

If you’re playing for bragging rights, you can skip this step. But if there is going to be money involved, you’ll need to decide how much to sell each square for. The amount you sell each square for multiplied by 100 will be the total amount of the prize pool.

Get people to play

Now comes recruitment: Time to sell (or give away) those squares. For those who have never played before, this is often a good time to remind them that this is purely a luck-based game. Knowing the Super Bowl matchup inside-out does not give you an advantage here.

You’ll want to fill as many squares as possible with the names of people who are participating in your Super Bowl squares game. If you don’t fill up every square you can simply write “push” into any blank squares that are left.

The final step is to assign the numbers 0 through 9 randomly to both the column header and the row header. It’s best to use an online randomizer or to pull the numbers out of a hat when doing this. It also helps to have a witness!

Now that you’re all set up, it’s time to sit back and watch the game. You can either award payouts as they happen or after the game. More on that below.

Of course, these are just our suggestions. You might want to only pay out twice (at the half and at the end of the game) or you might want to alter the amount that gets paid out.

The winning squares depend on the last digit of each team’s score at the time of the game when you choose to pay out. Then you see where those numbers intersect to find the winner. Let’s use Super Bowl 54 as an example:

The score at the end of the first quarter was Chiefs 7 - 49ers 3. The winner was whoever’s name was at the intersection of 7 on the Chiefs’ axis and 3 on the 49ers axis.

The score at the end of the second quarter was Chiefs 10 - 49ers 10. Remember that we only use the last digit of a team’s score, so the winner was whoever’s name was the intersection of Chiefs 0 and 49ers 0.

The score at the end of the third quarter was 49ers 20 - Chiefs 10. Once again, the winner was whoever’s name was at the intersection of Chiefs 0 and 49ers 0.

If set up properly, Super Bowl squares is completely a game of luck as you can’t choose your numbers. However, some number combinations are definitely better than others.

You’ll be happy if you end up with some mix of zero and seven. In fact, 0-0 has been the winningest squares combination in Super Bowl history, hitting 19 times. On the other end of the spectrum, you won’t be feeling great about your chances if you have some combination of two or five.

Here you'll see every combination of scores that have been Super Bowl squares winners —based on payouts at the end of each quarter — going back to Super Bowl I: 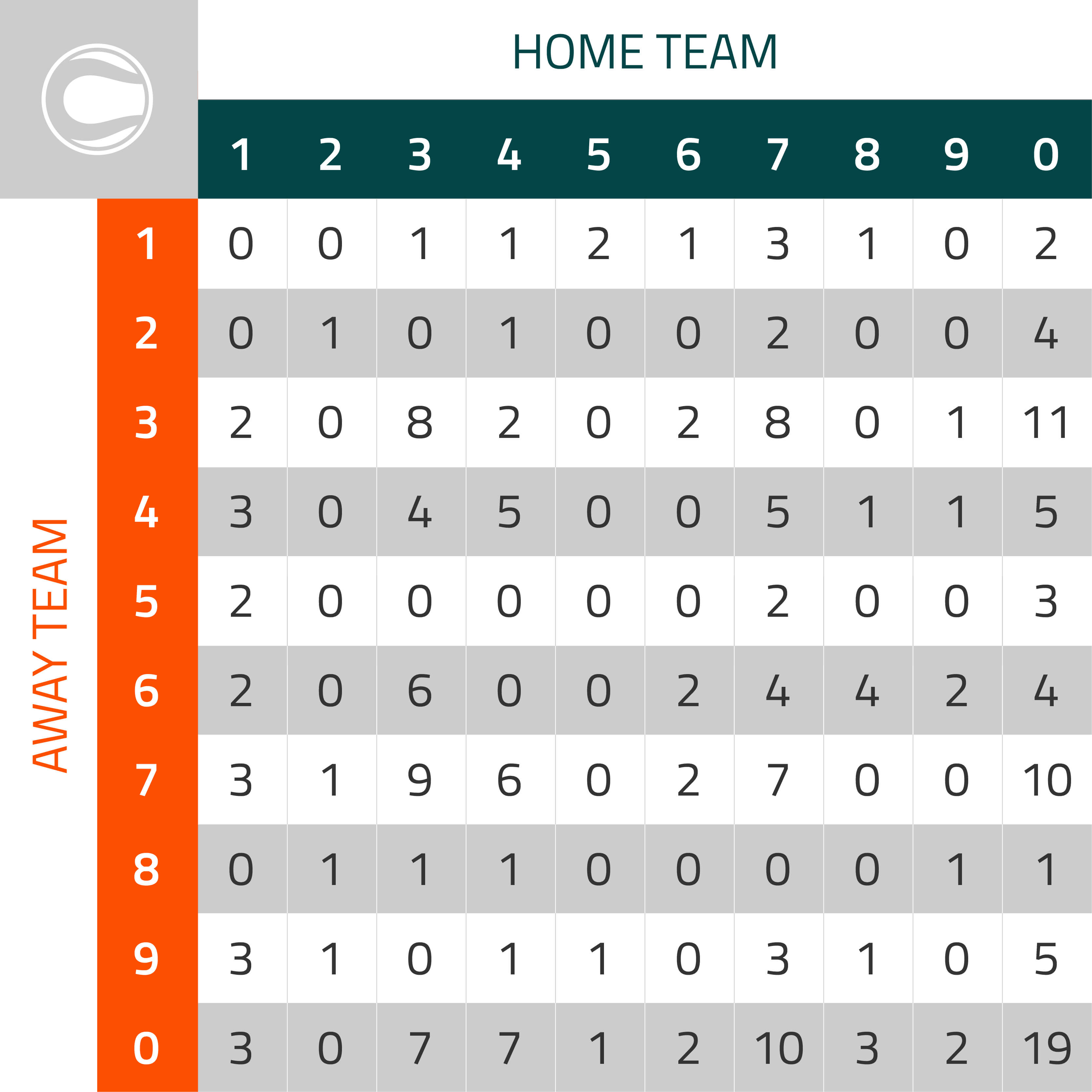 Yes. We saw this happen in Super Bowl 54 for the intersection of zero and zero got paid out twice.

The final payout for Super Bowl squares comes at the end of the game, regardless of whether that is after the fourth quarter or after overtime. 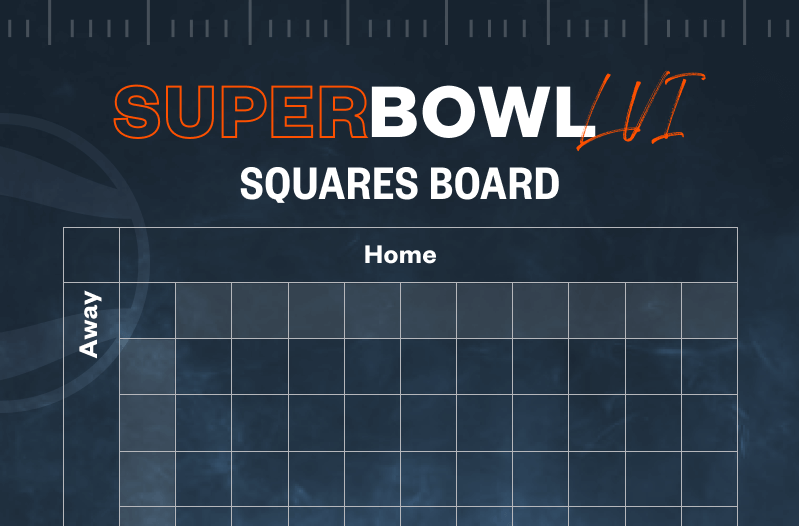