Winning the Super Bowl is the goal of every NFL coach and entrance into this elite club of champions is celebrated with the Gatorade bath – a surprise baptism of icy, colored sports drink. Not only has this tradition become a staple of Super Bowl Sunday but betting on the Gatorade bath color is one of the most popular props available.

FanDuel, BetMGM, and DraftKings are offering odds on the Gatorade bath color in regulated markets.

You can find legal Super Bowl coin toss odds at sportsbooks in the following states:

Canadians looking to bet on the color of the Gatorade can find markets on Sports Interaction and Coolbet, which are offering odds on the same array of colors. Coolbet has Blue as the +255 favorite and BetRegal favors Orange at +200.

While betting on the color of the Gatorade bath isn't exactly a science, recent history, and common sense could get you a decent payoff with an educated guess. First off, stay away from clear/water, which we saw four years in a row from 2005-2008 but haven't seen in 13 years since and is still somehow near the top of some odds boards.

Two of the last three Super Bowl winners have taken a blue Gatorade shower, but going back further, five of the previous 12 winners have been doused with Orange. Orange seems like a good bet since not only has it been so popular but Cincinnati defensive Sam Hubbard also said that the Bengals Gatorade is always orange (which not coincidently is also their team color).

We'll lean towards Orange at +300 or better, but if your sportsbook has worse odds than that, we'd pivot towards blue, which matches the team color of the Super Bowl favorite Rams and also happens to be the most popular flavor sold in the US.

Will Gatorade be dumped before the final whistle

Most Super Bowl betting sites will offer Gatorade bath props for the Super Bowl, as well as other exotics around the national anthem or halftime show.

However, most state-regulated sportsbooks are not authorized to offer odds on the color of the Gatorade bath, including operators in Nevada, due to the unofficial grading of this prop bet.

That said, New Jersey and Indiana sportsbooks received permission to offer prop betting on the color of the Gatorade bath in 2020 for Super Bowl LIV.

What color was the Gatorade in Super Bowl 2021?

Last year, the Tampa Bay Buccaneers dominated Super Bowl LV but once Tom Brady kneeled down for the final time, all that bettors wanted to know is what color Bruce Arians' Gatorade shower going to be.

It wasn't immediately clear as the broadcast didn't show it but Twitter tells us blue was the winning color at Super Bowl 55:

Blue cashed as a massive underdog, coming in at closing odds of +500 or more at many online betting sites. Orange was the pre-game favorite, although red had seen a big move in the lead up to the Big Game as both teams had red in their uniform colors.

The Super Bowl Gatorade bath is a fun Big Game tradition that’s decades old and has sparked one of the most unique exotic prop bets in all of sports, allowing you to bet on the color of the Gatorade bath.

What is the Super Bowl Gatorade bath?

The Gatorade bath – or Gatorade shower as it’s also known – usually comes towards the end of the game when the result is all but official or after the final whistle blows and a Super Bowl winner is crowned.

Players grab a cooler full of Gatorade (or water) and ambush their coach on the sideline with a freezing shower of ice cubes and colorful sports drink. This fun moment contrasts the stressfulness and seriousness head coaches carry into the Super Bowl and kicks off the postgame celebrations.

Gatorade bath bets are among the number of exotic Super Bowl props set for the annual NFL championship game. Unlike most Super Bowl odds, this prop isn’t directly tied to the results on the field and is graded outside of the box score, much like the coin toss, the length of the national anthem, or halftime show props. The Gatorade bath is often captured by the TV broadcast and graded based on that image.

Most Super Bowl betting sites will offer Gatorade bath props for the Super Bowl, as well as other exotics around the national anthem or halftime show.

However, most state-regulated sportsbooks are not authorized to offer odds on the color of the Gatorade bath, including operators in Nevada, due to the unofficial grading of this prop bet.

That said, New Jersey and Indiana sportsbooks received permission to offer prop betting on the color of the Gatorade bath for the first time for Super Bowl LIV.

How to bet on the Gatorade bath

Along with other Super Bowl odds, it's important to learn how to bet on Super Bowl prop markets. For Gatorade props, sportsbooks set odds on the color of the Super Bowl Gatorade bath, basing those potential returns on trends from past Super Bowls, team colorways, and popular colors of Gatorade. The list includes all available colors of Gatorade as well as Water/Clear.

The favored team to win the Super Bowl often sees its team colors higher up on the Gatorade bath odds board, due to the fact that it has a higher probability of winning the game and delivering the ceremonial soaking.

Oddsmakers will often set colors associated with the competing Super Bowl teams among the favorite colors for the bath as well as place Water/Clear near the top of the board since they know that every team will always have coolers filled with water on the sideline.

Popular color flavors like Orange, Blue, and Yellow/Green are also often among the shorter odds available. Colors and odds will vary from sportsbook to sportsbook based on the oddsmakers’ opinion and betting handle.

Let us revisit the grape, err great, purple Gatorade prop betting fiasco of 2020. Betting on which color of Gatorade will shower the winning coach is one of the most popular Super Bowl prop bets out there. It is a slippery, yet entertaining slope for bettors to ride. The wager — and color purple — garnered added attention last year, with heavy steam pouring in as a tribute to Kobe Bryant following his tragic death. Orange turned out to be the color of choice, resulting in many bettors taking a proverbial bath due to the outcome.

The Gatorade bath began in the 1980s and quickly became one of the most lighthearted moments of Super Bowl Sunday. But it wasn’t until the boom in online sports betting during the late 90s that betting on the color of the Gatorade bath became popular.

Going back to 2001, Orange is the weapon of choice for Super Bowl-winning teams, being used five times as the Gatorade bath, followed by Clear (4), Yellow (4), Blue (3), and Purple (2). Four head coaches have come out bone dry without a Gatorade bath in that time frame.

Can you legally bet on the Gatorade bath?

Since betting on the color of the Gatorade bath isn't stricty a brt on on-field action, not all states allow sportsbooks to offer odds on it.

You can legally bet on the Super Bowl Gatorade bath in the following states:

The Gatorade bath betting rules will depend on the individual book and how it's grading this exotic prop. As some winning coaches are subjected to multiple baths, sportsbooks may stipulate or grade the correct color on the first bath or they may pay out both colors used.

There have been instances in which no bath was given, and some books offer this as a betting option. However, if no Gatorade bath takes place and it wasn’t an option on the odds board, it is up to the book to either grade this prop no action and refund all bets or grade all bets as losers.

As this is a Super Bowl bet that isn’t defined in the box score, the grading and ruling on this prop is subject to whatever the TV broadcast shows or what is captured by photographers.

The Gatorade bath is a fun betting market that is quite popular at every Super Bowl.

Yes, depending on if Super Bowl betting sites in your region offer odds on the Gatorade shower.

Over the past 20 years, orange has been the most popular color of the Gatorade shower, being used five times. Blue was used in 2021 for Super Bowl 55.

Orange is the most popular color of Gatorade shower at the Super Bowl, being used five times since 2000.

The Gatorade shower at the end of Super Bowl 2021 was blue. 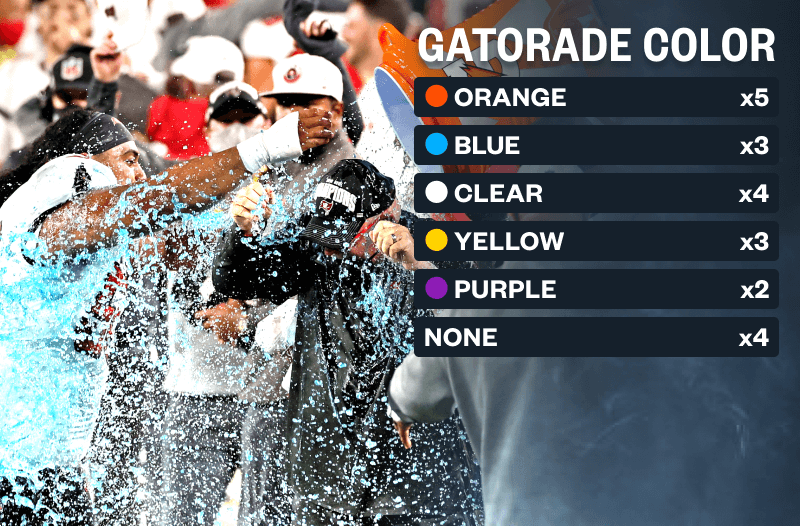