Patrick Mahomes vs Tom Brady: Who Should You Bet On?

While Patrick Mahomes and Tom Brady won't literally play against each other on the field in Super Bowl LV, you can have the QBs duel each other with Mahomes vs. Brady prop bets.

The NFL is billing Super Bowl LV as a battle between Patrick Mahomes and Tom Brady. In reality, however, these star quarterbacks aren't "facing off" against each other and won't even share the field at the same time.

That's where Super Bowl betting slides in. Thanks to the endless list of Big Game gambling options, football fans can have a real Mahomes vs. Brady showdown at their sportsbook, with many props pitting the two QBs against each other in a series of head-to-head bets.

If you're buying into the hype around this battle between the future of the NFL and the former face of the league (and we sure are!), here are some Mahomes vs. Brady bets to make for Super Bowl LV.

This Super Bowl prop bet could finish a lot closer than the current odds indicate (Mahomes has a 60.78 percent implied probability of topping Brady in passing yards), with Brady's Over/Under passing yards total sitting at 295.5 yards and Mahomes at 325.5 yards.

While Mahomes and this K.C. offense can pile up the passing gains, Tampa Bay's pass rush won't give the Chiefs a lot of time for those big downfield plays to develop. Kansas City is, however, loaded with playmakers who can turn a short toss into chunk yards, with Mahomes ranked second in YAC (yards after catch) this season. The Bucs defense has done well defending the deep ball (46 pass plays of 20-plus yards allowed) but has been torched by the catch-and-run at times, sitting 10th in YAC allowed (2,002).

As for Tampa Tom, his passing numbers are kind of all over the page in the playoffs. Brady launched 381 passing yards versus Washington in the Wild Card, 199 versus New Orleans in the Divisional Round, and dropped 280 against Green Bay to help the Bucs advance to the Super Bowl. Kansas City has been susceptible to the big play due to its blitz-happy defense and Brady has the vertical threats to exploit those holes.

One key thing to note is how many extra touches Brady has received during the postseason. The Bucs defense has five takeaways in the playoffs and Tampa Bay has run 67.3 plays per playoff game compared to a regular-season rate of 63.6 (23rd in NFL). Kansas City doesn't make too many mistakes, recording an average of only one giveaway per contest (sixth in the league). The Buccaneers have also handed off more in the playoffs, throwing on only 56.4 percent of snaps compared to 63.7 percent in the regular season (third highest).

Brady's completion percentage for the postseason has been... not so great. After connecting on almost 66 percent of his throws in the regular season, the Bucs QB has gone 60 for 109 in three playoff games for a dismal 55 percent completion rate. Granted, Washington (No. 2) and New Orleans (No. 3) were two of the top-rated pass defenses in DVOA at Football Outsiders.

The Chiefs stop unit comes in 16th in that advanced metric but has allowed foes to complete just 62.3 percent of their passes on the year. Kansas City checked Josh Allen to 58.3 percent in the AFC title game and Baker Mayfield connected on 62 percent of his throws in the Divisional Round—par for his season average. It seems viable that Brady will see an uptick in his completion percentage on Super Sunday and books have his Over/Under completion rate at 62.5 percent.

Mahomes, on the other hand, has been locked in during his two postseason efforts. He completed 50 of 68 total passes (73.5 percent) versus Buffalo and Cleveland and his Over/Under completion percentage prop is set at 70.5 percent for Super Bowl LV. The Under, however, is juiced to -148.

Mahomes capped the 2020 regular season with a completion rate of 66.3 percent and saw his accuracy slip in games in which he was heavily pressured, such as a 55.3-percent performance against the Saints, who sacked him four times in Week 15. He also had a rate of 51.2 percent when getting sacked three times versus Las Vegas in Week 5.

The Bucs are going to bring the heat, especially after having success disrupting Hall of Fame QBs like Aaron Rodgers and Drew Brees (the two most accurate arms in the NFL). Tampa Bay has limited postseason rivals to just under 63 percent completions, including a 19-for-34 bummer from Brees in the Divisional Round.

Again, this one could be closer than expected—if the Bucs can make Mahomes uncomfortable. Given the state of the Chiefs’ offensive line, it's a solid possibility.

Tom Brady vs Patrick Mahomes Tale of the Tape

Complementing Mahomes in the backfield is the rushing combo of Clyde Edwards-Helaire and Darrel Williams, who both found the end zone in the AFC Championship Game. We've of course seen Mahomes call his own number on red-zone tries, too, like when he scored a rushing TD in the Divisional Round. Three of the Chiefs' seven postseason touchdowns have been on the ground, which is a sharp contrast to the 40/16 split in passing versus rushing TDs they posted in the regular season.

Tampa Bay wasn't far off that production, with 42 passing scores versus 16 rushing touchdowns during the regular season. It's been more of the same in the playoffs, with seven of the Bucs' 10 offensive TDs coming through the air, including three passing strikes in the NFC Championship.

While bruising back Leonard Fournette is a goal-line monster and speedster Ronald Jones II finished with seven TDs on the year, the bulk of the Buccaneers' weapons have their hands up. Mike Evans has gone from home run hitter to red-zone wrangler, with nine of his 13 total TDs coming inside the 20-yard line. Brady also has two capable tight ends in Rob Gronkowski and Cameron Brate facing a Chiefs defense that's allowed 10 total scores to TEs this season. And let's not count out Antonio Brown, Chris Godwin or 5-foot-9 sparkplug Scotty Miller.

We're not downplaying the pay dirt appeal of Chiefs targets Travis Kelce or Tyreek Hill, but Kansas City has been slow out of the blocks in recent games (only 16 total first-quarter points since Week 13—minus Week 17's wash), including a blank opening frame in the AFC title game. That could leave more time for Brady to draw first blood.

We've already touched on just how disruptive Tampa Bay's pass rush can be, with seven playoff sacks on the heels of 55 QB kills during the regular season. Defensive coordinator Todd Bowles has dialed up the blitz on 39 percent of snaps and the Bucs own a pressure percentage of 27.8—the third-highest mark in the NFL.

That said, Mahomes is quick and very slippery. He's been sacked once in the playoffs and 22 times in the regular season, despite a game of musical chairs up front in pass protection all season. Kansas City finished sixth in ESPN's pass block win rate metric and the extra bye week has given Mahomes time to heal up from a turf toe injury he suffered in the Divisional Round. The loss of starting left tackle Eric Fisher is a big one but Mahomes at least has a fighting chance when pass rushers close in. Not like Brady.

The Bucs have done a great job keeping the veteran QB upright, with Brady getting sacked only 21 times during the regular season, which is among the lowest rates allowed in the NFL. But the playoffs have seen No. 12 come under fire. He was sacked three times versus Washington and once in each of the past two games.

To call Brady slow would be an insult to slow QBs (we see you Big Ben), especially in this age of fleet-footed passers. The Chiefs finished the year with only 32 sacks but ranked fifth in QB knockdowns and 12th in pressure percentage (24.8 percent). Kansas City racked up four sacks versus Allen and the Bills two weeks ago and loves to blitz just as much as Tampa (35.6 percent)—not just relying on beasts like Chris Jones up front but bringing bodies from all over the place, such as safeties L'Jarius Sneed and Tyrann Mathieu.

This isn't a true head-to-head prop, with both quarterbacks further down the list of "anytime touchdown scorer" odds. But, given the mobility difference between the two, you might be shocked to see Brady right behind Mahomes when it comes to cracking the goal line.

Brady isn't going to break out a thrilling TD scramble any time soon, but you do have to watch out for the QB sneak. Unlike some other veteran QBs (cough... Philip Rivers.. cough) who flat out refuse to run the QB keeper, Brady loves that shit. He put the Saints to bed with a 1-yard flop into the end zone in the Divisional Round and recorded three rushing touchdowns in the regular season.

As mentioned, Mahomes has already rushed for a TD this postseason, when he opened the scoring in the Divisional Round with a 1-yard scamper into the corner of the end zone. He has two rushing scores on the season and if you think there are any cobwebs left over from his concussion scare three weeks ago, maybe you tread lightly when it comes to this bet or his rushing yards props.

I believe he's perfectly fine and we'll see Mahomes running for his life against this vaunted Tampa pressure, which could lead to some broken play gains and mad dashes for the goal line—something the Super Bowl LIV MVP isn't afraid to lay out for. Mahomes scored a 1-yard TD in last year's Big Game win over the 49ers, who much like the 2020-21 Bucs were a stellar defense with a great pass rush. 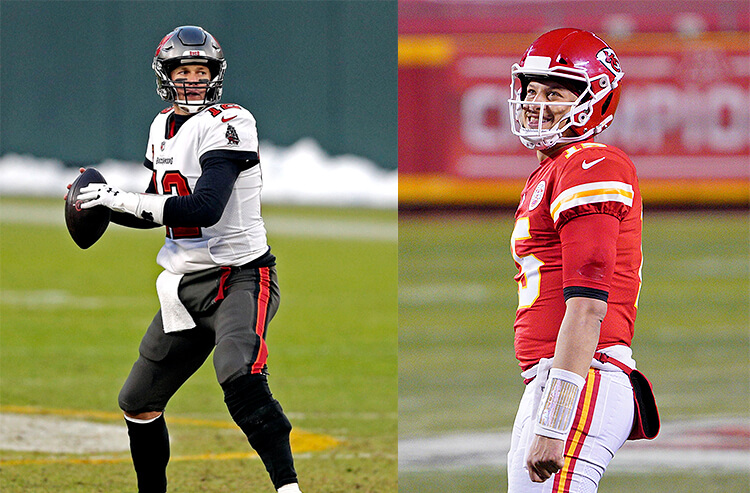 Patrick Mahomes vs Tom Brady: Who Should You Bet On?
Provided by