Nothing gets the blood pumping like tossing a few bucks down on the biggest game of the year. And if you really want to send your pulse racing, don’t wait until the confetti pops to cash in your Super Bowl LV bets.

With a seemingly endless list of Super Bowl betting options – which grows every day closer to kickoff – there are a number of Super Bowl wagers that will be decided in the opening 15 minutes of the game.

If you’re looking to inject your Big Game betting with a little nitro, check out these quick-hitting “fast and furious” bets for the first quarter of Super Bowl LV. Buckle up.

The opening kickoff of any Super Bowl game is one of the most highly-anticipated moments on the sports calendar, and nothing sucks the hype out of the kickoff like the ball sailing through the end zone for an anticlimactic touchback.

Oddsmakers have set this Super Bowl prop as “Yes” on a touchback as the -305 favorite with the “No” coming back at +230. There’s good reason for these prices too: Tampa Bay’s kickoffs have gone for touchbacks over 84 percent of the time (second highest in NFL) while Kansas City has a touchback percentage of 75.45 (fourth highest).

Looking just at opening kickoffs in the 2021 postseason, however, the Bucs have received the opening kick in all three playoff games so far, settling for a touchback versus New Orleans in the Divisional Round but returning the ball versus Washington and Green Bay.

For the Chiefs, both opening kickoffs in their two postseason tilts went out the back of the end zone: Cleveland kicking to K.C. in the Divisional Round and the Chiefs kicking to Buffalo in the AFC Championship.

As for recent Super Bowl opening kickoffs, six of the past seven Big Games have led with returns (only Super Bowl LI opened with a touchback in that span), including Kansas City’s Mecole Hardman bringing the ball out of the end zone for a return of 29 yards in last year’s Super Bowl. It would seem kick returners are anxious to make a play right out of the gate.

The weather could also play a role in how this Sunday’s opening kickoff unfolds. The current forecast is calling for wind gusts over 20 mph Sunday night, blowing southwest from corner-to-corner at Raymond James Stadium. That could keep the kickoff in bounds, depending on wind direction.

First Play of the Game: Run or Pass?

You have two offenses that lean towards the pass overall, with Tampa Bay throwing on 62.5 percent of its total snaps (fifth-highest in NFL) and Kansas City going pass on almost 62 percent of its offensive plays (10th highest). Those tendencies have books padding “Pass” as a -124 favorite while “Run” is sitting at EVEN money for this prop.

Since the bye in Week 13 (following the loss to Kansas City in Week 12), the Bucs have led with a pass as their first play on offense in four of those seven games. However, Tampa Bay has gone with handoffs to RB Leonard Fournette to start the past two playoff games and has found greater balance with the rushing attack in the postseason, passing only 56.44 percent of the time.

The Chiefs have also leaned toward the run on their first offensive play call since Week 12 (minus Week 17 throw-away game versus L.A. Chargers). Kansas City has gone run on those opening plays in four of those six contests but did start the AFC title game with a pass.

And if you’re interested in how each offense approached their Week 12 matchup: K.C. went pass on its first offensive play. Tampa went run.

Looking at the Buccaneers’ recent opening drives, it’s been pretty much all or nothing for this Tom Brady-led offense. During this seven-game winning streak, they’ve scored three touchdowns on opening drives, with three punts, and one field goal.

Kansas City (again, leaving weirdo Week 17 out of the mix) hasn’t been great on opening drives in its last six contests, settling for a punt on four of those initial attempts while scoring one TD and throwing an interception.

In terms of defense, the Chiefs have checked opponents to three punts, two field goals and an interception in their previous six outings that mattered. Tampa Bay’s stop unit, on the other hand, has a count of four punts forced, one TD and one FG allowed on rival opening drives since Week 14.

If we fork through the past 18 Super Bowl box scores we see the opening drive of the game resulted in a punt 10 times. Four of those opening drives have ended in field goals, two have resulted in interceptions, only one has registered a touchdown, and one went for a safety (the very first play of Super Bowl XLVIII).

Will there be a touchdown in the first seven minutes?

Unlike many Super Bowl props, this one is throwing out a flat -120 per side on “Yes” and “No”.

On one hand, you have two explosive big-play offenses with an abundance of playmakers. On the other, Big Game jitters and defenses protecting against those momentum-swinging home runs could keep both the Bucs and Chiefs out of the end zone for the first seven minutes.

Kansas City has been a slow starter since Week 13. Taking Week 17 out of the mix (when the Chiefs sat their starters), K.C. has totaled just 16 first-quarter points in the six games leading into Super Bowl LV, including a goose egg in the first quarter of the AFC Championship, and only once has there been a touchdown scored inside the eight-minute mark (vs. Browns in Divisional Round).

Tampa Bay didn’t waste any time finding pay dirt against the Packers in the NFC Championship, with Brady and Mike Evans connecting for a TD at the 10:59 mark of the first quarter. In fact, the Bucs have scored or have allowed a touchdown in the opening seven minutes in four of their last seven games, with all four scores coming before the five-minute mark.

Going back to their regular-season meeting in Week 12, Kansas City found the end zone first but that Tyreek Hill 75-yard touchdown strike squeezed in just Under the eight-minute tick, coming at 6:49 of the first quarter. 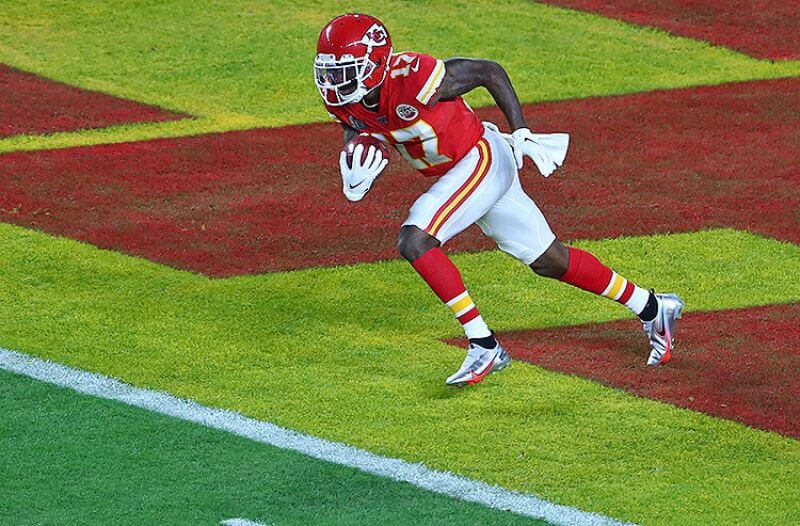