If You Like the Chiefs, Here Are 5 Bets to Make

If you like the Chiefs to win the Super Bowl, don't get cute: bet on Patrick Mahomes to be the core of the offense, just as he has been the past three seasons.

We're less than a week away from Super Bowl LV between the Kansas City Chiefs and Tampa Bay Buccaneers on February 7.

The Chiefs are the defending champions and have stayed at the top of the Super Bowl odds board all season, so it's no surprise that they enter as favorites.

However, an imposing figure stands between Patrick Mahomes and the Chiefs from being the first team since the 2003-04 Patriots to repeat as Super Bowl Champions. The GOAT himself, Tom Brady. But if you think Mahomes is on his own way to GOAT status and are betting the Chiefs to win, consider these five Kansas City prop bets this Sunday.

OK. This may be a weird prop bet considering we are rooting for the Chiefs to win the Big Game, because who wants to see the team they are backing begin in a hole? But hear me out. It’s almost a rite of passage for the Chiefs’ to let their opponent put up the opening points on the scoreboard. I mean, with an offense as potent as the Chiefs...it’s only fair, right?

Seriously though. The Chiefs allowed their opponents to score the first points 10 times in the 15 regular-season games in which all their key starters played (Mahomes & Co. took Week 17 off). On top of that, the Chiefs have given up the first score in four of their last five playoff games, including the AFC Championship against the Buffalo Bills and last year’s Super Bowl versus the San Francisco 49ers.

Additionally, this bet is almost like live betting the Chiefs in advance if they were to go down early. Only better, because we are getting a touch more value. Even when Kansas City was down 10-0 to the Bills, live betting only had the Chiefs at about +115 on the moneyline. It’s almost like the Chiefs enjoy giving teams a false sense of security. But that can’t be true. Right?

Either way, this will be one of the few plus-money bets we’ll get on the Chiefs in the Super Bowl, so we’re going to take advantage.

Jump on this number for Travis Kelce and jump on it quickly—it may not last long. While Kelce may not win NFL Offensive Player of the Year as his quarterback has lobbied for, the Chiefs’ star tight end is coming off his greatest season to date, which is saying something.

His 1,416 receiving yards set the NFL single-season record for a tight end and he became the first TE to ever record multiple 100-catch seasons. And boy, has he has been on some sort of catch streak. Kelce has seven or more catches in each of his last 10 games, becoming just the third player since 1950 to do so. He capped it all off with an otherworldly 13-catch, 118 yard, two-touchdown performance against the Bills in the AFC Championship Game.

While the Buccaneers have some good linebackers, covering Kelce is a completely different beast. And that said, Tampa Bay gave up the seventh-most receptions to tight ends during the regular season. You can bet that Kelce’s and the Chiefs’ success in the Super Bowl are indestructibly linked.

You can’t talk (or bet on) one half of the Chiefs’ dynamic duo of pass-catchers without mentioning the other. So, we turn our attention to Kansas City speedster Tyreek Hill.

You might think with Kelce dominating the Chiefs’ box scores that there may not have been enough ball to go around.

All Hill did this season was convert 87 catches into 1,276 yards and 15 touchdowns. And that hasn’t stopped in the playoffs, as Hill and Kelce have each topped 100 receiving yards in both of the Chiefs playoff games.

That said, this is a pretty shrewd number. While Hill went above this number in each of the Chiefs’ first two playoff games, he only went Over it five times in the regular season. But the last time he went Over it, was against this very same Buccaneers team. And if you’ll remember, he not only went Over that number but obliterated it.

Hill went off for a career-high 269 yards against the Bucs back in Week 11, with an absurd 215 of those coming in the first quarter alone. The Chiefs held on for a 27-24 victory in that game, and Hill will be a key to repeating that success.

You didn’t think we’d go this whole article without picking a Patrick Mahomes prop, did you? Well of course we won’t disappoint. Unfortunately, since Mahomes is under one of the biggest microscopes in this game there isn’t a ton of value in a surprisingly large amount of his player props, including his yards props.

His passing yards prop is around 329.5 at most shops, which is a number he has gone Over eight times in his 17 games. He provides little value in the most yards straight up prop, laying too much juice against Tom Brady, but the most passing yards handicap might be our sweet spot.

Mahomes has outgunned the opposing quarterback by at least 27.5 yards eight times over his last 10 starts, including the Chiefs’ win over the Buccaneers back in Week 12. While Brady put up a respectable 345 yards in that matchup, Mahomes torched the Bucs’ secondary for 462 yards.

The other angle of this prop is the underrated nature of the Chiefs’ secondary. While they rank middle of the pack 16th in pass defense DVOA, per Football Outsiders, they haven’t allowed a 300-yard passer since that game against Brady and rank seventh in opponent passer rating.

Bet on Mahomes' deadly precision with the deep ball, and his ability to seemingly fling the ball from any position to anywhere else on the field, to be the difference here.

This one is pretty much as simple as it gets. If the Kansas City Chiefs win the Super Bowl, Patrick Mahomes will win the game’s Most Valuable Player Award.

First of all, a quarterback has won the Super Bowl MVP 10 times in the last 14 years. Second, if any of those guys have a big game, it’s more than likely that Mahomes was brilliant and had a bigger one. Plus, this is pretty good value on a Mahomes’ prop.

Bet Mahomes to take the next step in his own GOAT status and secure his second consecutive Super Bowl MVP. 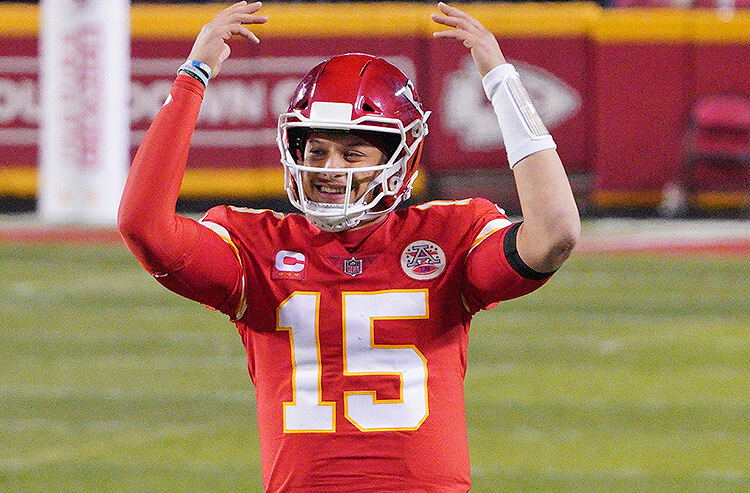 If You Like the Chiefs, Here Are 5 Bets to Make
Provided by