The NFL betting board has a terrific Sunday Night Football matchup in Week 11, with the Super Bowl favorite Kansas City Chiefs facing off against their AFC West rivals the Las Vegas Raiders.

The Chiefs will look to get revenge against Vegas for their only loss of the season, while the Raiders will aim for their fourth consecutive win despite being installed as 6.5-point home underdogs.

We break down the NFL odds with our best free Chiefs vs Raiders picks and predictions for Sunday Night Football on November 22, with kickoff at 8:20 p.m. ET.

With this game taking place at the domed Allegiant Stadium in Paradise, Nevada, weather won't play a factor. Be sure to monitor the gametime conditions for other Week 11 matchups with our NFL weather info.

The Chiefs are 5-0 ATS in their last five games following an ATS loss. Find more NFL betting trends for Chiefs vs. Raiders.

When these teams met up at Arrowhead Stadium in Week 5, the Raiders pulled off a 40-32 upset win as 11-point underdogs.

However, that was just the first Raiders victory against the Chiefs in the last six meetings, with Kansas City winning the other five contests by an average score of 34-14.

The Raiders pass defense ranks 25th in the league, allowing 264.9 yards per game, and that number balloons to 300.5 ypg at home. Look for Patrick Mahomes and the Chiefs' aerial attack to exploit that weakness while Andy Reid uses the extra week of preparation to ensure that Kansas City's defense plays better than in Week 5.

With the Raiders 2-5 ATS in their last seven home games and the Chiefs 9-1 ATS in their previous 10 contests against teams with a winning record, back KC to win and cover.

The Over/Under of 57 for this game is the highest total of the week, and given the 72 points scored between these squads earlier this season, it's easy to see why. That said, there is reason to consider taking the Under.

The Under has cashed in six of the Chiefs' previous seven road games and the Raiders tend to play lower-scoring contests against divisional rivals, going 20-6 to the Under in their last 26 contests against AFC West rivals.

Although the Chiefs surrendered a whopping 490 yards and 40 points to Vegas in Week 5, they've actually played very well on defense over the rest of the season. In their other eight games, Kansas City has held opponents to 337.1 yards and 17.9 points per game.

While the Raiders should still be able to pick up yards on the ground thanks to Josh Jacobs and a vulnerable Chiefs run defense, don't expect Derek Carr to have another field day through the air. Take the Under.

The Chiefs explosive offense is known for getting off to fast starts. They rank fifth in the league in first-half scoring with 16.8 ppg and that number has gone up to 19.3 ppg over their last three games.

That's bad news for a Raiders defense that ranks 27th in the league in first-half defense, surrendering 14.8 points per game. Look for Mahomes and the Chiefs to get off to another quick start and back them to go Over their first-half team total. 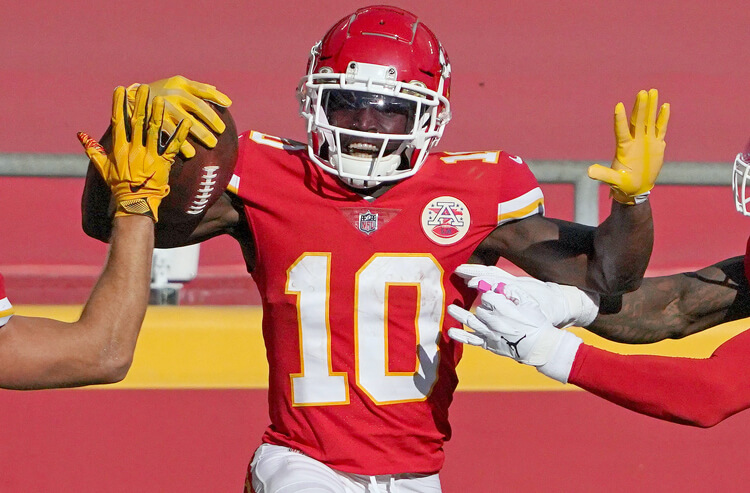