Forget COVID-19, Nick Chubb's kneel down or the Hail Murray. The biggest news in the NFL betting world going into Week 11 is rookie phenom Justin Herbert's haircut. The OROY frontrunner went from looking LA-made with a fantastic flow...to looking like a child getting ready for class picture day.

Speaking of childish, that's the best way to describe Week 10 for the Covers staff parlay and teaser picks. Another full round of losses has left a bitter taste in all our mouths, similar to that first time you had a sip of beer as a kid (or your first shot of Jagermeister as a slightly-bigger kid).

As we get to our picks, we promise that it is, in fact, the Covers staff betting on these NFL odds, but we wouldn't blame you if you thought it was this crew making the picks.

Here are our parlay and teaser picks for Week 11:

Maybe The Champ should mimic Justin Herbert and get a haircut to end my skid? Speaking of fades, fade the Jets. The NFC Least can’t win games outside its division, so the Bengals should be fine getting more than a TD against Washington. And the Chiefs should roll against A COVID-depleted Raiders squad.

Adding some padding to some short underdogs and using the 6-point teaser to move through some key numbers. Moving Cincy from +1 to +7, Houston from +2 to +8, and the L.A. Rams from +4 to +10 Monday night—setting up a possible hedge/middle in primetime.

I may be in last place, but unlike alien rock monsters, this week's NFL schedule has some vulnerable spots. I’m going to back the Chargers, despite Herbert getting that ridiculous haircut, while also going to tease the Cowboys, Titans and Chiefs.

I shall be avenged!

There once was a rookie QB named Justin,
Whose luscious locks had all the women bustin'.
So he chopped off his hair,
Like he just didn't care.
And now he's a quarterback that I have no trust in.

The Jets' offense is beyond pathetic and I don't see Justin Herbert and his new haircut dragging this total Over. Dalvin Cook and the Vikings have won three games in a row and get to feast on a Swiss cheese Dallas run defense and a Cowboys squad that is 1-8 ATS. Teams in the NFC East are 2-18-1 SU against teams outside their division so I like the Bengals to pull off the win as short road pups against Washington.

Imagine betting on the Philadelphia Eagles to win a football game. Imagine!

This week I had put together a parlay that included both Cleveland and New Orleans winning…but then Myles Garrett got ruled out and the Taysom Hill news broke. So instead, we’re going to do this:

I’m convinced our esteemed colleague Jared jinxed us last week, comparing me to Collin Morikawa in his Masters-themed intro. Morikawa went on to finish T44, and we bricked our parlay harder than a Danny Green 3-pointer.

This week, I’m taking Tua instead of having him ruin my Sunday again, fading Flacco (significantly less chance of disappointment), and backing the Pack with points. Hopefully, we do something more effective with the rebound than Markieff Morris.

My three-team parlays this season suck so much, Dyson is considering naming its next vacuum the Everson. Seriously. I think I've hit one of these all season, maybe two.

Here we go, though, standard three-teamer for Week 11.

“They” say the definition of insanity is doing the same thing over and over again and expecting different results. After losing nine of my first 10 parlays, we’re going to hit Week 11 with a – you guessed it – PARLAY!

Call it craziness, call it pride, call it me being forced to only play parlays after chirping other Covers staff for teasers (because “Mama didn't raise a wuss”).

Keeping it simple with spreads this week: Taking Aaron Rodgers getting points against Noodle Arm Rivers, the Ravens at home against a sad Titans defense, and Deshaun Watson to light up the Patriots like a suburban family Christmas tree (AND the street-side house exterior too, so you know it's serious).

If you have read this far, you're either looking for a good laugh or you're lost. It's gut-check time after nearly -5 units through 11 weeks and we need to find three winners—in a hurry.

The Bengals get to play a Washington team that has faced the Giants twice and Dallas in its last three games. The Texans have one of the best passing matchups in the NFL this week as a lack of pressure combined with 12.1 yards allowed per completion makes the New England defense one of the worst units in the league. Finally, the Browns have their running-game mojo back after RB Nick Chubb and G Wyatt Teller returned last week. They don't have to play in a monsoon this Sunday and play an Eagles team who has also faced the Cowboys and Giants (twice) over the last three weeks. 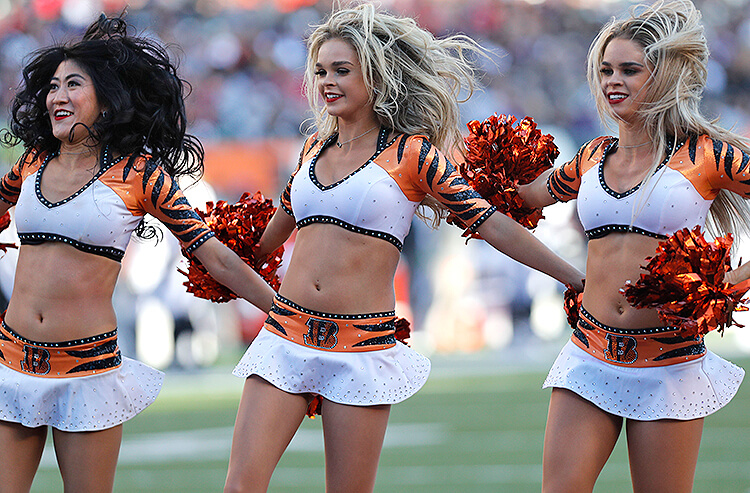