In Andy Reid, we trust.

That resounding message was obvious Sunday for the Chiefs after a surprising fourth-down conversion enabled them to finish off the Cleveland Browns 22-17 in the AFC divisional round at Kansas City, Mo.

"That's why we love Big Red. He's always on time. He's like our spirit warrior out here behind the scenes," safety Tyrann Mathieu told NBC of Reid's surprising call that iced the victory.

Backup quarterback Chad Henne gained 13 yards on a scramble, then threw a stunning fourth-and-inches completion to Tyreek Hill that allowed the Chiefs to run out the clock.

Henne replaced Patrick Mahomes, who left the game with a concussion midway through the third quarter after he was tackled by Browns linebacker Mack Wilson on an option keeper. Mahomes passed for 255 yards and one touchdown.

Reid indicated Mahomes was doing well after the game.

"He got hit in the back of the head and kind of knocked the wind out of him," Reid said. "He's doing great right now, which is a real positive, passed all the deals that he needed to pass, so we'll see where it goes from here."

The Chiefs become the first AFC team to host a conference championship for a third consecutive season. They will face the Buffalo Bills, whom they defeated 26-17 in Buffalo on Oct. 19. The Bills have won eight straight behind Josh Allen, while Mahomes has won 11 straight starts.

Harrison Butker's third field goal, this one from 33 yards, extended the Chiefs lead to 22-10 with 4:24 left in the third quarter.

Baker Mayfield then led the Browns on an 18-play, 75-yard touchdown drive that consumed 8:17 of the clock and brought Cleveland to within one score for the first time since early in the game. The drive included two fourth-down conversions, and the touchdown came on a run by Kareem Hunt on third-and-goal from the 3-yard line, closing the score to 22-17 with 11:07 remaining.

Henne started the last regular-season game when Mahomes and several Kansas City starters rested after clinching the No. 1 seed. He completed 6 of 8 passes for 66 yards.

However, Henne was picked off by Karl Joseph in the end zone with 8:10 remaining, giving the Browns a chance for a game-winning score. But they stalled and punted from their 32-yard line before the Chiefs ran out the final 4:09.

"We're a team. We're one heartbeat. We play for one another," Mathieu said of the fourth-quarter stop that left the Browns facing fourth-and-9.

Henne's clutch pass for the first down came after it appeared Kansas City would run the clock down before punting. Instead, Henne rolled to his right and lobbed a pass to the open Hill.

Hill and tight end Travis Kelce each had eight receptions for 110 and 109 yards, respectively. Darrel Williams added 78 yards on 13 carries and had four receptions.

Butker's third-quarter field goal represented the Chiefs' only points of the second half. He missed a 33-yard attempt earlier in the quarter.

Baker Mayfield passed for 204 yards and one touchdown.

"He fought like he always does; he rallied," Browns coach Kevin Stefanski said of Mayfield. "I don't think I put him in enough good spots. We didn't get the job done, and that's a big disappointment."

Nick Chubb added 69 yards rushing for the Browns, who were looking for their first AFC title game appearance since 1989.

The Chiefs began their postseason defense of last year's Super Bowl title by scoring on each of their four first-half possessions while generating 293 yards to build a 19-3 halftime margin.

Mahomes, who completed 19 of 25 passes for 233 first-half yards, rushed for a 1-yard touchdown and hit Kelce for a 20-yard score. Butker then kicked field goals of 50 and 28 yards after missing his first PAT attempt.

Cody Parkey booted a 46-yard field goal to cap the Browns' first drive, but a costly fumble kept them from scoring a touchdown late in the first half.

Rashard Higgins caught a pass along the boundary from Mayfield and leaped for the pylon, but the Chiefs' Daniel Sorensen caused a fumble that rolled outside of the end zone for a touchback.

Kansas City took over with 1:34 left, and Mahomes drove the Chiefs 70 yards for Butker's chip shot with two seconds left. 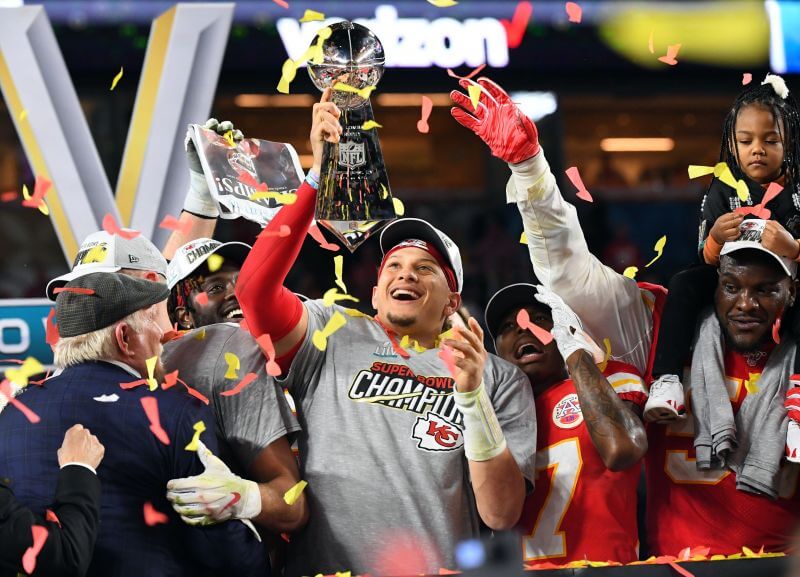 The Complete Guide to Super Bowl National Anthem Betting
Get the best sports betting information delivered straight to your inbox for free.
By signing up for the Covers newsletter, you agree to receive electronic communications from Covers about our products and services, as well as other content that may be of interest to you
About Us
Contact Us
Careers
Our Team
Our Community