Every dog has its day, but that day sure as hell wasn’t last Sunday.

I also got bit – and bit bad – in posting a 0-3 ATS week for my NFL Underdogs picks. It wasn’t my first 0-fer, and won’t be the last, so there’s no need to dwell. I’ll just cry a little inside and move on…

On with the NFL picks and predictions for Week 11.

The betting markets are overreacting to New England’s win over Baltimore last Sunday, not taking into consideration that the Ravens were plagued with injuries on the defensive side of the ball, as well as the fact that Baltimore just isn’t as strong as it was in 2019.

Before that win, the Patriots barely squeaked by the Jets in Week 9 and had lost four straight between Week 4 and Week 8. Now, New England hits the road and faces a ripe letdown spot against a Texans team not as bad as it’s 2-7 SU record would indicate. Just look at who Houston has played.

Deshaun Watson continues to play elite football, despite a franchise that constantly seems to be on fire. Outside of his weather-limited efforts in Cleveland last week, Watson posted a passer rating of 121.1 in the three games prior with eight touchdowns, no interceptions and an additional 114 yards rushing.

New England is one of the worst defenses against the pass in the NFL, ranked 30th in passing defense DVOA and giving up 12.1 yards per completion—tied for worst in the league. Houston is picking up 11.7 yards per completion – third best – and completes almost 68 percent of its throws.

The Patriots rushing attack may have its way with the Texans defense, but that won’t be enough firepower to keep up if this turns into a track meet—something Houston games tend to do.

With the Colts beating up on Tennessee and the Packers getting a scare against the Jaguars, Aaron Rodgers & Co. find themselves getting points in Indianapolis.

Rodgers is the toughest test this Indy secondary has faced all season and I’m not 100 percent buying into the Colts’ defensive dominance. Plus, I love Green Bay taking to the fast track inside Lucas Oil Stadium.

The Cheeseheads are putting up almost 32 points per game on the road this season, with that production ramping up to 38 points per game inside. Green Bay is 4-1 ATS as a visitor and if the team lacked energy against Jacksonville (which it did), there’s no shortage of motivation entering Week 11. A win over the Colts could be a springboard for the home stretch of the season, and the Packers have a fairly soft slate ahead.

As I often say in this column, sometimes you just have to bet the best team getting the points. This is one of those cases. The Packers have covered in five of their last seven games as underdogs and are the best bet in non-conference games since Rodgers took over as a starter, going 31-19-1 ATS versus the AFC since 2008.

Get ready to run Tom.

The Buccaneers have lost only three games this season and in each of those games, Tom Brady was blasted by the opposing pass rush. He was sacked three times in each of those defeats, completing just under 61 percent of his passes and throwing only three touchdowns to five interceptions.

Up next for the Bucs is Los Angeles and its vaunted pass rush. The Rams sit third in the NFL in sacks and have collected 19 of that 31 QB kills over the past five games, including six sacks on MVP candidate Russell Wilson last week.

Yes, Tampa poses a big pressure threat to Los Angeles as well. However, Jared Goff and this McVay attack thrive on quick-hitting passes for massive yards after the catch and have a proven rushing game that can keep the Buccaneers honest.

Brady, on the other hand, relies on deeper strikes and air yards, with 37 plays of 20 or more yards on the year. He needs time for those looks to develop and the L.A. pass rush just won’t give him that luxury Monday night. The Rams rank tops in the NFL in passes of 20 or more yards allowed, giving up just 19 deep strikes on the season, and just pulled the plug on the Seahawks’ powerful passing attack. 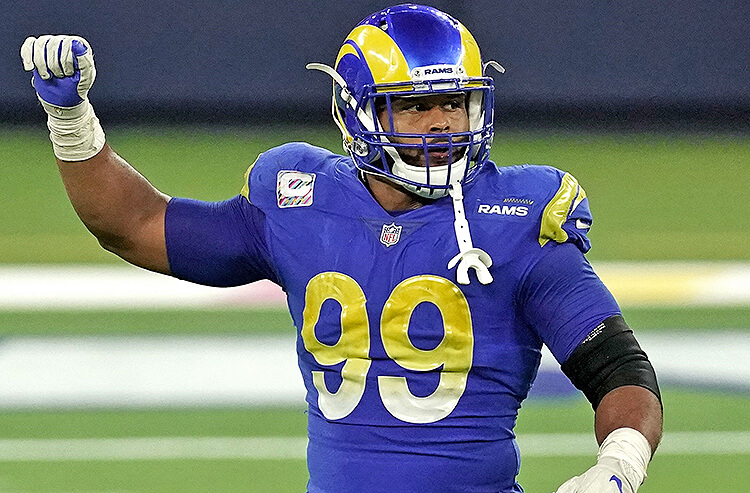