The Green Bay Packers come to Lucas Oil Stadium for a non-conference clash with the Indianapolis Colts in Week 11.

The Colts opened as 1-point home NFL betting favorites Sunday afternoon and have seen this spread tick up as high as -2.5, with sharp play on Indianapolis. On the surface, this is a battle between one of the league’s top offenses versus one of its toughest defenses. However, softer schedules have helped puff up the stats for both sides.

These are our NFL free picks and predictions for Packers vs. Colts on November 22.

This game will be played indoors at Lucas Oil Stadium. Be sure to monitor the gametime conditions for other Week 11 games with our NFL weather info.

The Packers are 5-2 ATS in their last seven games as road underdogs. Find more NFL betting trends for Packers vs. Colts.

As we alluded to above, the Packers offense may not be as good as its high-level metrics would indicate. Nor are the Colts as stingy as their defensive averages would have you believe. Weaker opposition has puffed up those numbers.

Looking at the Packers, taking on defensive turnstiles like Detroit, Atlanta, Houston and Minnesota has added a curdy layer of fat to Green Bay’s production. That said, the Cheeseheads still sit second in offensive DVOA at Football Outsiders and thrive when coming indoors.

In their three games played in closed confines, Aaron Rodgers and the Packers have exploded for an average of 38 points per game and hope the clean indoor track at Lucas Oil can kickstart the rushing attack and RB Aaron Jones.

Since returning from a calf injury, Jones has been quiet with a total of 104 yards on 28 carries—an average of just 3.7 yards per rush. That pales in comparison to his ground work in the first four games of the year.

The Indianapolis rushing defense sits third-best in yards allowed per game (91.6) but has been bullied for bigger gains in recent contests. The Colts allowed 157 yards rushing to the Titans last Thursday and have given up rushing totals of 110, 98, and 124 in the past five outings.

If the Packers can get the run game going, then Rodgers and Matt LaFleur’s play-action sets can keep Indy guessing. Rodgers is easily the best QB the Colts have faced so far this season, plus Davante Adams, Marquez Valdes-Scantling and the likely return of Allen Lazard presents a pick-your-poison proposition to the secondary.

This total opened as low as 48.5 and was quickly bet up to 52 before action on the Under dropped it to 51.5 points.

The last thing Indianapolis wants is to get into a shootout with the Packers. Philip Rivers has been inconsistent but has settled in the past four games, granted those contests have come against some weaker stop units.

The Colts have the 22nd-slowest offensive pace in the league (27.97 seconds per play) and will likely employ a game of keep-away with Rodgers, looking to roll out fresh legs behind a trio of RBs in Nyheim Hines, Jordan Wilkins and Jonathan Taylor. They combined for 110 yards rushing in Week 10 and helped Indy control the ball for 31:18.

Green Bay is also very methodical with the football, running a play every 30.65 seconds and boasting an average time of possession of 33:08—tops in the NFL. With both teams looking to establish the run, the clock should get a workout and this final score will land under the inflated total.

Hines has emerged as an offensive weapon for the Colts over the past few weeks, both on the ground and in the receiving game. He rushed for 70 yards and caught five balls for 45 receiving yards in the win last Thursday.

The Colts' run blocking helped pave the lane for that big day and with Indianapolis trying to shorten the offense to keep Rodgers & Co. on the sideline, Hines could see plenty of touches again in Week 11. The Packers have allowed the third-most fantasy points to running backs so far this season, including four receiving TDs to those pass-catching backs. 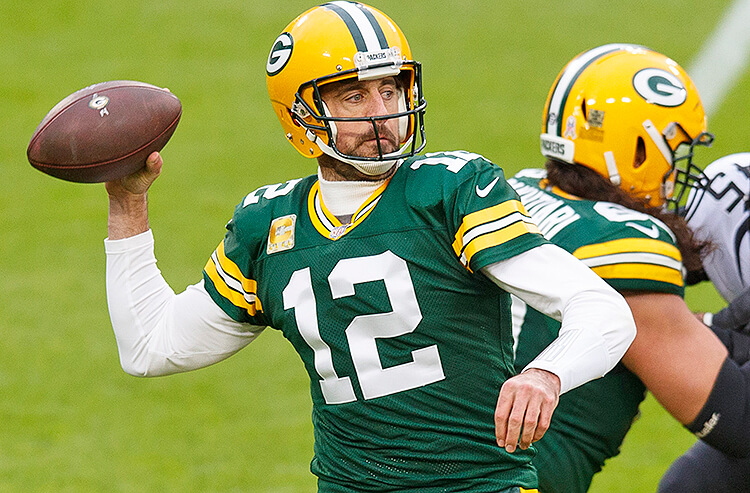 Packers vs Colts Week 11 picks and predictions
Provided by