After a couple of mediocre Monday Night Football matchups the last few weeks, the final NFL betting option for Week 11 should be a good one as the Los Angeles Rams take on the Tampa Bay Buccaneers.

The Rams are fresh off a 23-16 win over the Seahawks to improve their record to 6-3 but will be 4-point underdogs against the 7-3 Buccaneers.

We break down the NFL odds with our free picks and predictions for the Rams vs. Buccaneers in Monday Night Football action on November 23, with kickoff at 8:15 p.m. ET.

It should be a warm evening at Raymond James Stadium in Tampa Bay with temperatures ranging between 65 and 79 degrees, winds reaching up to 10 mph, and a 17 percent chance of showers. Be sure to monitor the gametime conditions with our NFL weather info.

The Under is 6-0 in the Rams last six games overall. Find more NFL betting trends for Rams vs. Buccaneers.

The Buccaneers have played very well on both sides of the ball this season, ranking sixth in the league in scoring with 29.6 points per game while holding opponents to 22.6 ppg. The Bucs plus-7 average scoring margin per game is particularly impressive when you consider that they lost by a total of 46 points in two games against the Saints.

Although the Rams offense has been efficient, they put up a modest 24 ppg and their normally-reliable ground game could be neutralized by a Bucs run defense that holds foes to a league-low 76.6 rushing yards per game.

L.A.'s defense has been the key to their success but it won't be easy to keep Tampa Bay's offense in check. With the exception of their games against the Saints, the Bucs offense has been very explosive, averaging 33.8 points and 397.6 yards per game in their eight other contests.

Tom Brady's ability to spread the ball to multiple receivers makes Tampa Bay's aerial attack very difficult to defend against. While the Bucs might not run up the score on the Rams stingy defense, they should be able to put enough points on the board to win and cover.

Brady and the Bucs offense gets plenty of attention but it's Tampa Bay's defense that ranks first in the league in DVOA, according to Football Outsiders.

The Rams, led by two-time Defensive Player of the Year Aaron Donald, are second in the league in scoring defense in holding opponents to just 18.7 points per game and are coming off a contest where they limited Seattle's high-powered offense to 16 points.

These are two of the stingiest defenses in the NFL, with the Rams second in the league in yards allowed while the Bucs are third. With the Under going 6-0 in the Rams' last six games and also cashing in four of the Bucs' previous five contests against teams with a winning record, back it again on Monday night.

Although Brady was destroyed by the Saints, getting picked off five times in two games, he's dominated the rest of the league this year.

The 43-year-old is completing 67.2 percent of his passes for 286.6 passing yards per game and a terrific 21 touchdown passes in his other eight contests. Perhaps most impressive is that he's thrown just two interceptions in those games.

Expect another efficient game from the GOAT and take the Under 0.5 on his interceptions total. 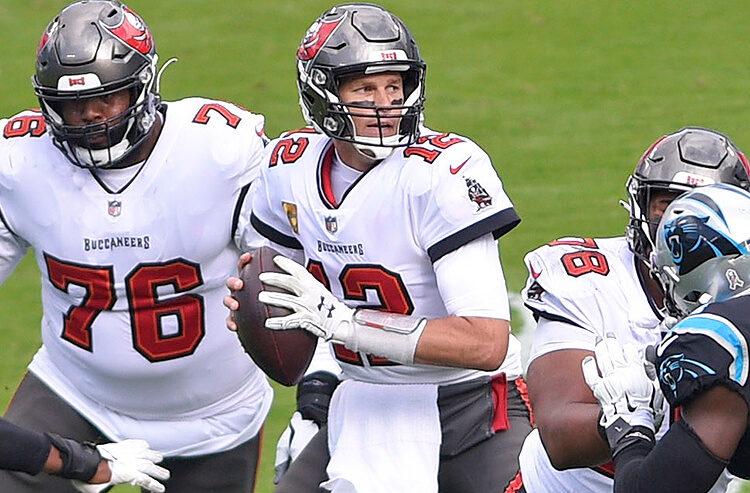