The “Tank for Trevor” is in full effect in Week 11, with the winless New York Jets opting to sit their top quarterback for Sunday’s road matchup with the Los Angeles Chargers.

The Chargers opened as low as 7.5-point NFL betting favorites but that has since been pumped up as high as -9.5 before coming back down to -8.5. Los Angeles has dropped three straight games and has failed to cover in each of those contests after starting the schedule 5-1 ATS.

Here are our NFL free picks and predictions for Jets vs. Chargers on November 22.

This game will be played indoors at SoFi Stadium. Be sure to monitor the gametime conditions for other matchups with our NFL weather info.

The Jets are 8-20-1 ATS in their last 29 road games. Find more NFL betting trends for Jets vs. Chargers.

The Chargers have a habit of playing to the level of their competition. Against strong teams, that’s a bonus. But against weaker foes, it’s to the detriment of NFL bettors. However, this is the Jets and it’s becoming more and more obvious that this franchise is taking the fall for the first overall pick in the 2021 NFL Draft.

Gang Green had one last hurrah in Week 8, putting a scare into the rival Patriots on Monday Night Football, only to blow a 27-17 lead in the fourth quarter and lose 30-27 on a last-second field goal. That sent New York into the bye week with an 0-9 record and firmly focused on the future – not Week 11.

Quarterback Sam Darnold isn’t playing this Sunday due to a sprained AC joint (as well as the team protecting its sweetest trade chip) and that leaves veteran QB Joe Flacco under center, who performed well against New England, but has been anything but consistent over his pro career.

The Jets are bad, but they’re especially rotten on the road. New York is 0-4 ATS as a visitor, getting outscored by an average tally of 30.5-8.2 – a difference of more than 22 points per road game. Despite some bad habits by the Bolts, any spread under 10 points seems like a deal.

We’re not buying into Flacco’s sudden resurgence against a Patriots defense that stinks at stopping the pass. His career splits show a massive gap in performance between home and away (90.4 passer rating home vs. 78.1 passer rating road) and the last time Flacco played on the road, he totaled just 186 yards on 21-of-44 passing with zero touchdowns and one interception at Miami in Week 6.

The Chargers defense has been respectable at defending the pass this season and allowed only 169 yards to Tua Tagovailoa last week. The Bolts could also get defensive stalwart Joey Bosa back on the end, if he progresses through concussion protocols.

Los Angeles’ play-calling has been pretty subdued, and the run game behind Joshua Kelley and Kalen Ballage doesn’t pose much of a threat. Rookie QB Justin Herbert is passing the ball on just 55 percent of offensive snaps, and when he does drop back, he’s picking up an average of only 5.6 air yards per completion.

Los Angeles doesn’t need Herbert to ball out in Week 11 to win this game, so expect a safe and efficient attack that chews up clock (32:03 TOP is fourth-most in NFL) and tries to avoid the mistakes that burned it against the Dolphins last weekend.

When a team is as bad as the Jets, you can take some liberties when it comes to the high-paying prop bets.

We’ve already discussed just how bad New York is on the road (minus-22.3 points per game) and chunking that into quarters shows us that on average the Jets have lost every quarter.

The first and second quarters have margins of -8.0 and -7.3, while the third and fourth are a little closer as opponents take their foot off the gas, boasting margins of -4.2 and -2.7 respectively.

With one tanking team and another desperate for a strong showing, we could easily see the Bolts winning each and every quarter (L.A. must score more points than N.Y. in each frame). If anything, this prop bet will keep you involved right to the end of what could be a very dull game. 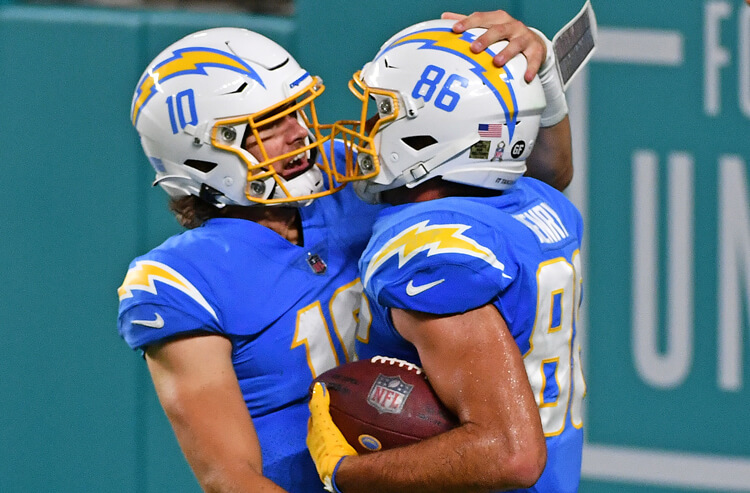 Jets vs Chargers Week 11 picks and predictions
Provided by