Reunions continue as a week after Cam Newton returned to the Panthers, their former head coach Ron Rivera and the Washington Football Team head to Carolina. Find out how the latest reunion will play out with our NFL betting picks.

Just a few days ago, a Week 11 matchup between the Washington Football Team and Carolina Panthers would be far from must-see TV for football fans.

But since the Panthers blew the dust off the No. 1 jersey and brought back the former face of the franchise, Cam Newton, interest has peaked in this game. NFL betting odds have Carolina as a 3.5-point favorite with Newton expected to start at quarterback against his former coach Ron Rivera and the WFT.

We try to make sense of this crazy contest with our NFL free picks and predictions for Washington at Carolina on November 21.

Carolina opened as low as -2.5 and has been bet up past the key number of a field goal to -3.5 with that spread showing vig as high as -115. The total opened at 43 points and flirted with 43.5 before getting bet back down to the opening number.

The Under is 10-3 in the Panthers' last 13 games overall. Find more NFL betting trends for Washington vs. Panthers.

Washington vs Panthers picks and predictions

Despite a storybook return that would make a case for a Disney+ series in Week 10, Cam Newton is far from the player who took the Panthers to a Super Bowl and won league MVP all those years ago.

While he’s always a threat to run – like we saw with 14 yards and a rushing TD on three takes last Sunday – his passing prowess has fallen off a cliff in recent years, hurting as much as he's helping. During his forgettable cup of coffee in New England, he threw 10 interceptions to just eight touchdown passes while rushing for 12 scores.

If Carolina wins – and covers this spread – it’s not going to be because of Newton. The backbone of this Panthers unit is the defense, which ranks No. 3 in DVOA at Football Outsiders and returns home for just the second time in the past five outings this Sunday.

Washington is ripe for a letdown spot after stunning the defending Super Bowl champs at home in Week 10. The Football Team suddenly snapped out of an offensive funk which saw it post an EPA per play of -0.092 over the previous four games (28th in that span), scoring 29 points and dominating the football for more than 39 minutes – thanks in part to early turnovers from Tom Brady.

Now, Washington hits the highway for just its fifth road game of the year. It’s 1-3 SU and ATS as a visitor this season, boasting a points per play margin of -0.152 over those four away games (26th). The Hogs won’t have the same success hogging the football, boasting a third down conversion rate of just 33 percent away from home and going up against a Carolina stop unit slamming the door on those critical downs, allowing rivals to convert at an equal 33 percent clip.

The Carolina offense is going to need all the extra touches it can get to cover this spread – and maybe even some takeaways from the defense – now that the line is on the other side of a field goal. While we’re not crazy about laying this many points with the Panthers, but the situational spots lean me towards the home side.

This is going to be an ugly game, but that suits Carolina just fine. The Panthers rank second-best in EPA allowed per play at -0.136 on the season and throw the kitchen sink at opponents in terms of extra pass rushers, blitzing on almost 32 percent of opponent’s dropbacks and stirring up pressure on 27.8 percent of those snaps.

Washington QB Taylor Heinicke had a great day versus a blitz-happy Tampa Bay defense last Sunday but was still swallowed up for five sacks and eight QB hits, and spent way too much time with the football before throwing. The Panthers have a much deeper secondary than the Bucs and have allowed only 4.8 yards per pass attempt over their last three games – tied for the lowest in the league in that span.

As for the Panthers' passing game, Newton will be the third QB in this Joe Brady system, which has been out of sync all season. Carolina has some talented targets in Robbie Anderson and D.J. Moore but chemistry continues to plague the Panthers, who have 22 drops on the year and only 25 passing first downs total over the last three games.

That puts the focus on the running playbook with Christian McCaffrey getting healthier and rookie RB Chuba Hubbard finding his footing. The Carolina rushing attack had a big day against Arizona, rumbling for 166 yards on 37 carries (helping eat up 37:42 in TOP) but Washington boasts one of the best run stop units in the NFL, ranked sixth in run defense DVOA at Football Outsiders and budging for only 3.9 yards per run since Week 7.

With two offensively challenged teams each coming off one of their best scoring games of the season, it’s time to sell high on this total.

Washington averages fewer than 19 points per game away from home and runs into one of the elite stop units in the league this Sunday. And the less we say about the Carolina attack, the better.

Before Week 10’s freak result against a shorthanded Cardinals club, the Panthers had played Under the total in three straight and sit 3-7 Over/Under on the year. Washington’s offense overperformed at the start of the schedule – leading to a 4-1 O/U count through five games – but has come back to earth while the defense has improved, producing a 4-0 O/U record since Week 6. 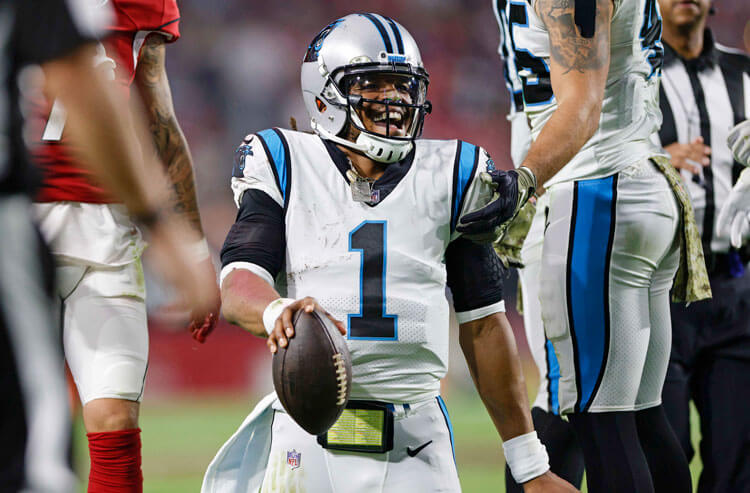 Washington vs Panthers Week 11 Picks and Predictions: Tight Scrap in the Tar Heel State
Provided by