The lowly Houston Texans visit their divisional foes this week as they head to Nashville to take on the Tennessee Titans. The gap between these two teams is massive and as our NFL picks highlight, the spread doesn't reflect that difference.

We’ve got a divisional clash on Sunday as the Texans travel to Tennessee to face the Titans. The teams sit at opposite ends of the AFC South, with the Titans sat on top with an 8-2 record and the Texans at the bottom with a 1-8 record and on the longest losing streak in the league.

Read our free NFL betting picks and predictions for the Houston Texans vs. Tennessee Titans.

The Tennessee Titans have been 10-point favorites since opening and remain so. We have seen movement in the points total though, with it dropping from 45.5 points down to 44.5 points today.

The Titans are 4-0 ATS in their last four games against AFC opponents. Find more NFL betting trends for Texans vs. Titans.

Texans vs Titans picks and predictions

This was never going to be a brilliant season for the Houston Texans. That was apparent from the second that Deshaun Watson said that he wouldn’t report and wanted to be traded. The Watson situation is rumbling on in the background but after a Week 1 victory, there was hopes that maybe the Texans could achieve something. Since then, the team has had eight straight losses, the most in the league.

That’s in stark contrast to the Tennessee Titans, who are tied for the best record in the entire NFL. Not even injuries to Derrick Henry and Julio Jones have slowed them down, and they have a three-win cushion at the top of the AFC South. Eventually, Henry’s absence could cost them games, but it won’t be this Sunday.

The Titans are strong favorites for a reason and they’ll easy swipe the Texans aside. The question is, will they manage to cover the 10-point spread?

The Titans’ offense continues to rumble on and detractors can point to playing in a division with two of the three worst teams in the NFL as a reason but it’s not just that. With an offense ranked 19th in offensive DVOA and 12th in defensive DVOA, it’s hard to pinpoint just why they’re so good. I believe that the hardnosed attitude of head coach Mike Vrabel is one of the reasons, as he’s a great motivator and has built this team in his image.

When we look at DVOA, we see a different story for the Texans. They’re ranked 17th in defensive DVOA and haven’t actually been that bad this year, despite a conscious effort to tank and load up on picks. The real issue has been on offense, where they’re bottom of the league, substantially behind even the Lions. Mitigating factors, such as third string quarterback Davis Mills having to replace second string Tyrod Taylor do give some reasoning, but this offense is truly awful. They’ve only achieved an average of 280.1 scrimmage yards per game, again bottom of the league.

The Titans are 4-0 in their past four when they’ve played other teams in the conference and they should make it 5-0 on Sunday. Eventually the wheels could come off for the Titans but it’s unlikely to be this Sunday, and they’re a good bet to cover the spread even when it’s as large as 10 points.

The public money has seen this line drop by one point already and it might move further before kickoff. The reasons for taking the Under are clear, the Titans’ offense is missing two of its big three stars against the worst offense in the league. Even with a modest total of 44.5 points, it still makes sense to take the Under.

The Under is 4-0 in the Texans’ last four games on the road and a bad offense on the road is unlikely to put up more than a score. Likewise, the defense is better than you might thing and they’ll probably do a reasonable job of stuffing the Titans’ various running backs and the threat of AJ Brown.

When Derrick Henry went down there was a rush across fantasy leagues to pick up Adrian Peterson off waivers. AP is one of the very best backs to play the game but he’s far from the force he was in his prime and isn’t an elite back anymore. The less said about Jeremy McNichols the better, he’s not proven himself this season when called upon to deputise Derrick Henry.

That leaves one man who, alongside Peterson, was activated from the practice squad after Henry’s injury. That man is D’Onta Foreman. The 25-year-old has moved around the league a bit since being drafted in the third round by the Texans in 2017. For my money, he’s the running back that best fits this offense. He has the closest physical match for Henry and during his collegiate career at Texas he proved to be a dominant physical runner.

He is the horse to back and there’s value on backing Foreman to score against the Texans. The Texans allow 145.44 yards per game to running backs (25th in the league) and give up on average 1.22 TDs to RBs per game (26th in the league). Foreman led the Titans’ running backs in snaps against the Saints, taking 35 percent. Foreman has been the most impressive of the trio and had a higher yards per carry and yards per catch than both of his rivals last week. This is a player who has fantasy league winning potential and he could start to own the backfield this week, especially if McNichols misses time. Back him now while you can. 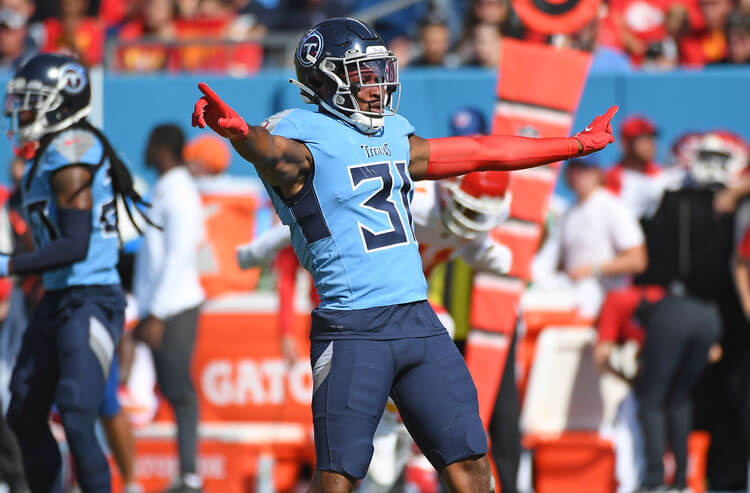