Seven rings, three MVPs, every record in the book... and ball security issues? Yes, welcome to the wild and wacky world of Week 11, where we've found the best values for NFL player props this weekend — which includes fading the GOAT.

The NFL season is past the midway point and with it comes a ton of opportunistic prop markets. We’re looking into every market to uncover some of the week’s best side, team, player, and derivative prop bets. We do the heavy lifting so you don’t have to!

It’s Week 11 already and we’re eyeing a pass-catcher for the Bears, an Under on Jimmy Garoppolo, and fading both the Steelers’ defense and the GOAT.

We bring you our favorite free prop picks and predictions for Week 11.

With Elijah Mithcell doubtful, one might think that the 49ers and Jimmy Garappolo might pass the ball a little more, but that’s not likely the case. Mitchell missed Weeks 3 and 4 earlier this year and Garoppolo managed 40 passes versus the Packers, in a game where San Francisco trailed by 17 points early, and then followed that up with a 23-pass performance versus the Seahawks in a game that still managed 49 total points.

The 49ers sit in the bottom-six in passes per game at 31, are coming off a 19-pass game last week, and Garoppolo has thrown the ball more than 30 times just twice in his eight games. Kyle Shanahan is comfortable with a backfield featuring Jeff Wilson, and coming into Week 11 as 6.5-point favorites against the Jaguars benefits the run game.

Jacksonville hasn’t been terrible of late, but it’s unlikely it will jump out to a big lead and force the Niners to abandon the run like Green Bay did. The Jags allow the 13th fewest passes per game at 34.

Garoppolo’s passing attempt total sits at 30.5 and that’s a big Under for us.

The bye week can be a big thing for rookie quarterbacks, as it gives them time to adjust and comprehend what was probably a blur of an introduction to NFL action. Justin Fields and the Bears are coming off their bye, while Fields looked good versus the Steelers in Week 9 on the big stage of Monday Night Football.

Although the Bears took the L, Fields gained some confidence in the passing game, finishing with 291 yards on 17 of 29 passing. He’ll likely be without receiver Allen Robinson, who is doubtful to suit up, in Week 11. This has us staying away from his total yards but we think his recent showing and matchup benefit tight end Cole Kmet.

Kmet’s receiving yard total sits at 39.5 yards and is starting to hit 42.5 at some books. The tight end went 6/87/0 versus the Steelers in Week 9 and has gone over 40 yards in three of his last four games. Over that stretch, he has a 91 percent snap share, is second on the team in targets with 25, is tied for the highest targets per route run of all Bears pass-catchers, and has a 22 percent target share. Robinson had a 19 percent target share and those balls need to go somewhere.

Baltimore may blitz a lot, but it’s allowed nearly 300 passing yards per game over its last three matches. Kmet will likely be the No. 2 option Sunday and at 39.5 yards with the market bullish on him, we’re following that trend.

Pittsburgh’s defense has been straight-up slipping of late. The Steelers have allowed an average of 5.2 yards per carry over their last three games, which works out to a league-worst 159 rushing yards per game. The Lions ran for 229 yards last week alone. Yikes.

Injuries are starting to stack up as well, as Pittsburgh will be without T.J. Watt, defensive backs Minkah Fitzpatrick and Joe Haden, as well as defensive end Isaiahh Loudermilk. Expecting this unit to suddenly get better versus the run is wishful thinking.

Enter the Chargers and running back Austin Ekeler. The all-purpose back is coming off an uncommon light workload last week, when he received 11 carries and three catches. We’d expect him to lead the offense in a big game for the Chargers and do more damage with his usual 12-15 rush attempts.

Ekeler is averaging a healthy 4.7 yards per carry this season and has at least 54 rushing yards in seven of his nine games. His floor is safe and with the Steeler owning a Top 10 pass defense, perhaps Ekeler reaches the 17-tote mark, which is the season-high he’s hit twice.

It’s a matchup driven Over 58.5, and we’ll be looking at props for other Chargers running backs if they open.

Tampa Bay’s offense looked out of sorts last week in a 29-19 loss to Washington. Tom Brady was missing his mark and tossed another two picks (one was not his fault), making it a total of four over his last two games, and at least one in three of his last four. Missing some key weapons could be a factor but it’s not a done deal that Brady has all his pass-catchers ahead of his Week 11 matchup with the Giants.

Rob Gronkowski is still questionable and could be limited even if he does play. Antonio Brown’s ankle injury has him on the wrong side of questionable again this week.

The Giants’ defense is one of 10 units in the league that average at least one interception per game. They had two INTs versus the Raiders in their last game, and they come in healthier after a Week 10 bye.

Brady is once again paying plus money to throw the ball to the other team and we’re taking the bait. Only the Chiefs pass the ball more than the Bucs, so there will be plenty of opportunities to cash this ticket fading the GOAT.

Till the Gaskin drops

What looks like a great matchup on paper for Myles Gaskin this week may not actually be, as results haven't followed the Miami running back of late.

In Week 10, Gaskin pranced for 31 yards on 14 carries, which was the third straight week he's been held to under 40 yards rushing. Since Week 8, the struggling running back is averaging 2.20 yards per carry as the Dolphins have the third-worst rushing offense by success rate.

Gaskin’s rushing total closed at 39.5 yards last week but has opened at 46.5 yards in Week 11 with a date against the Jets. Sure, New York ranks near the bottom in most rush-defense metrics, but so did the Texans — who held Gaskin to 34 yards on 20 carries two weeks ago.

You can fade this Miami offensive line 100 percent in the ground game, as not one of its O-linemen grades positively for run blocking. Miami also sits 31st in rushes of 10+ yards. Fade away.

Not enough Cooks in the kitchen

Tyrod Taylor had a tough task in his first game back under center, facing a Miami defense that has caught fire and blitzes at the second-highest rate in the league. The good news was that he peppered receiver Brandin Cooks with 14 targets — which didn’t turn into massive production (six catches for 56 yards) but the volume is exciting from a prop angle.

In that game, Cooks led all Houston receivers with 0.25 targets per route run and his average depth of target of 9.3 yards indicates a lot of those misses were not short passes. This week, Cooks will see a Tennessee secondary that allows the most receptions, and most yards, to opposing WRs in football.

The Titans also blitz at a Bottom-10 rate so, hopefully, that should give Taylor some more time to connect on the deeper routes. It isn’t a fun feeling doubling down on a Houston offensive player, but Cooks is literally the only skilled player on the offense.

He should be playing from behind a ton and this week's totals (5.5 receptions and 68.5 receiving yards) are not increases over his previous totals in what is a fantastic matchup.

Flacco of a doubt

Welcome to the Joe Flacco experiment... part whatever. The 36-year-old QB will be under center for the Jets Sunday and faces a Miami defense that has six takeaways over its last two games (four interceptions), generates pressure at the second-highest rate in football, and held Flacco to 186 yards on 21-of-44 passing and a pick in Week 6 of last season.

Oh ya, and he gets to play behind one of the worst O-lines in football and watched his team throw seven interceptions over its last three games.

The cards are stacked against Flacco yet books are hanging his Over 0.5 interceptions at -115. This number will surely come tumbling down as Sunday approaches. Flacco is the No. 3 QB on this team and could have an awful day in the Meadowlands. There is not much to get excited about for Jets fans right now, who have turned to a 36-year-old in the middle of a rebuild.

Looking at this interception price, it is 30 cents better than Justin Fields’, is the same as Josh Allen’s, and is 5 cents better than Carson Wentz’s. The real question is will Flacco make it out of this game in good health.

We are entering our third week with Trevor Siemian starting for the New Orleans Saints and we’ve learned a few things along the way — with one of those nuggets being the QB loves his tight end in Adam Trautman. Over the last two weeks, Trautman has 13 targets, which he's hauled in for nine catches and a modest 79 yards. He leads the team in targets over that stretch and his 4.8 aDot might come in handy this week versus the Philadelphia Eagles.

The Philadelphia defense gives it up underneath (if you recall, we highlighted that last week). The Eagles allow a league-high 74 percent completion rate but have given up the second-fewest passes of 15 yards or longer. This preventive defense should help the oft-targeted TE hit his modest yardage total of 25.5 yards, which is just a two-yard increase from his previous week’s total. His reception total did not open immediately but we’d make it a play at 2.5 (at -120 or better).

Trautman has topped this total in four of his last five games and is flying under the radar as one of the offense's most-targeted players. With Alvin Kamara on the wrong side of questionable again, the Saints will need another short-yardage target. 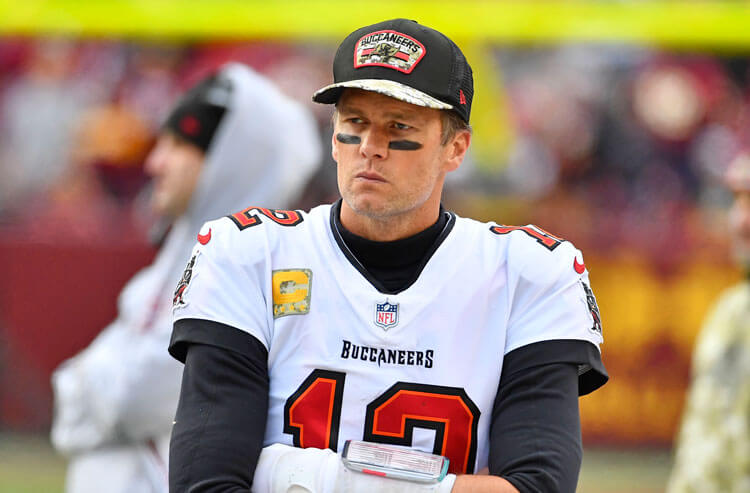