49ers vs Jaguars Week 11 Picks and Predictions: Trevor Lawrence The Key To Profit

The 49ers head to Jacksonville as 6-point favorites looking to build on their huge MNF win against the Rams. All signs are pointing to another strong Niners performance - read more in our 49ers vs. Jaguars picks and predictions.

It looked like another lost season for the San Francisco 49ers and then Monday Night Football happened. A dominant 31-10 victory over their division-rival L.A. Rams has given them a glimmer of hope. They now face a Jacksonville Jaguars team who are steadily improving despite sitting on a 2-7 record.

Do Sunday right by reading our NFL picks and predictions for the San Francisco 49ers vs. Jacksonville Jaguars.

When the lines opened the Jaguars were 7-point underdogs but that’s now dropped to 6-point underdogs with early bettors grabbing that line. The points total has also dropped from opening at 46 down to 45. Use the live odds widget above to track any future line movements right up until kickoff and be sure to check out the full NFL odds before placing your bets.

The Under is 4-0 in the Jaguars' past four games. Find more NFL betting trends for 49ers vs. Jaguars.

49ers vs Jaguars picks and predictions

What a week for the San Francisco 49ers. Going into a huge Monday Night Football clash against the Los Angeles Rams, they were 3-5. Nobody gave them much chance of winning, but not only did they win, but they also destroyed the Rams. The 31-10 scoreline doesn’t tell the full story of how dominant they were. Jimmie Ward picked Matthew Stafford twice and the defense held the Rams offense to 3/10 on third-down efficiency. The offense shone too, with Deebo Samuel continuing a great season with 133 scrimmage yards and two touchdowns, one through the air and one on the ground.

The 49ers now face the Jaguars on the road ahead of a series of games that feel very winnable. Whether they can somehow claw their way back into wildcard contention we don’t know, but they should definitely be leaving Florida with a win on Sunday.

The Jacksonville Jaguars have quietly and very, very slowly been picking up steam. They might sit on a poor 2-7 record but in their last four games, they’re 2-2 with wins against the Bills and Dolphins, both home games, albeit with the home game against the Dolphins taking place in London, England.

With the first overall pick of the 2021 NFL Draft on their team, you’d think that the success was down to him, but it hasn’t been. Trevor Lawrence has had a mixed campaign so far; we’ve seen some bad decision-making at times and also some truly magic moments. He’s only thrown for more than one touchdown on one occasion, the season opener against the Texans and hasn’t had his QBR exceed 60 since Week 4. Worryingly, his highest QBR in the past three weeks has been 37.8. It’ll come good for Trevor Lawrence, but it’ll take time, and it’s easy to forget that despite his immense potential, he’s still a rookie playing on one of the least talented offenses in the league. The line is poor, the receiver corps are nothing special and Urban Meyer is in charge – none of which are great for any young developing QB.

What has helped drag this Jaguars team forward in recent weeks has been their ability to defend the run. They’re still not a great defense - they rank 27th in the league in weighted DVOA but this run D is formidable and ranked seventh in rushing defense DVOA, allowing just 106 yards along the ground per game. That’s a number superior to those of the Packers, Patriots and Cardinals, teams who have been praised on defense this year.

Sadly, their secondary is woeful and the reason that they’re so bad. When it comes to defending the pass it’s a very different story to that of their rush defense. This is going to create an interesting matchup against the 49ers, an offense that bases so much of their game plan on the ground game.

The 49ers' defense is better all-round though and superior in every possible way. Their secondary doesn’t leave more holes than Swiss cheese and their rush defense has a better DVOA than the Jaguars.

Given the incredible performance that we saw against the Rams last week, it’s difficult to see anything but the 49ers covering here. They have superior coaching and superior players, a combination that’s hard to overcome even for a team improving each week like the Jaguars.

Given the struggles that Trevor Lawrence has had under center for the Jaguars, we simply must take the Under. Even if the 49ers put up around 30 points it’s hard to see the Jaguars doing enough scoring to take the total Over.

In their past three games, we’ve seen the Jaguars score a combined 33 points. The trends also point toward taking the Under. The Under is 4-0 in their past four games overall and 6-1 in their past seven games following a loss.

This one might surprise you given how I’ve talked about Trevor Lawrence so far in this article but it’s a great value prop. We’ll be taking Over 21.5 passing completions for the former Clemson man.

Firstly, let’s look back at recent games. In his past five games, he’s exceeded 21.5 completions 60 percent of the time. That also includes the Bills game in which the Jaguars relied on the ground game to hold on to their lead.

Then we look at the game script. I see the Niners taking a lead which will force the Jaguars to pass the football, not only that but they’ll be facing the fifth-ranked rush defense by DVOA, so you’d expect to see less of James Robinson than you would otherwise. We should see plenty of Lawrence though and he’s likely to have plenty of opportunities to air it out. 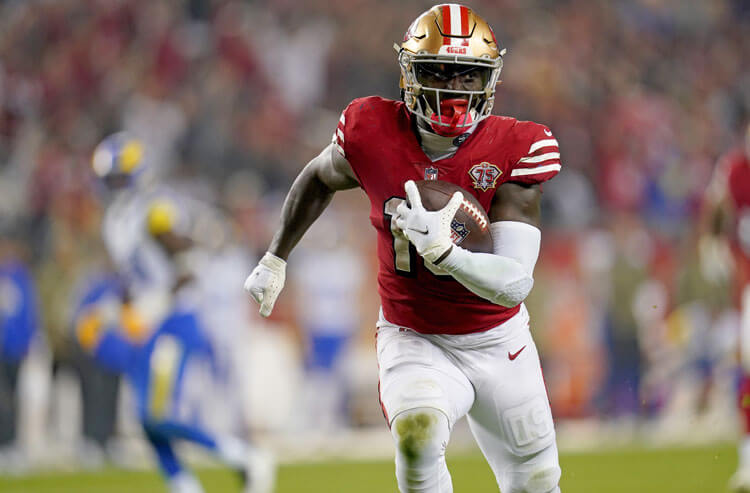 49ers vs Jaguars Week 11 Picks and Predictions: Trevor Lawrence The Key To Profit
Provided by