Packers vs Vikings Week 11 Picks and Predictions: Packers Too Thorough for Rivals

Green Bay is in peak form as it cruises into a divisional rivalry with Minnesota, who has been fairly inconsistent this season. Get the right angles for your NFL betting as we break down our Packers vs Vikings picks for Week 11.

The Green Bay Packers welcomed back Aaron Rodgers last week and he led them to another win. On Sunday, they face a Vikings team who are four wins below them in the division.

Can the Vikings get one over on their old rivals and increase their wild card hopes? Prepare for the game by studying our NFL picks and predictions for the Green Bay Packers vs. Minnesota Vikings on Sunday, November 21.

The Packers may be on the road, but they’re still favorites. They opened -2.5 but it’s shortened to just 2 points now. The points have also dropped, moving from 49.5 to 49.

The Packers are 5-0 ATS in their last five road games. Find more NFL betting trends for Packers vs. Vikings.

Packers vs Vikings picks and predictions

Last Sunday, we saw Aaron Rodgers return to the field in a matchup with Russell Wilson, also making his return. What could have been an exciting clash turned into one of the most boring games in recent memory. Regardless of the lack of excitement, that 17-0 victory sent the Packers to 8-2, tied for the best record in the league as arguably the best team in the conference, if not the entire NFL, on current form.

The Minnesota Vikings sit four wins back from the Packers with a 4-5 record. They may be .444, but at times this season, they’ve looked irresistible, such as Sunday’s win over the Chargers. The 4-5 record is probably slightly misleading, really. In the past three weeks, they’ve lost to the Ravens and Cowboys, two great sides, by a combined seven points. Add to that narrow losses to the Cardinals and Bengals earlier in the year and you can see that they’re better than the record indicates.

For all the talk of Aaron Rodgers, it’s the Packers defense that has impressed me most lately. Despite being only ranked 11th in defensive DVOA, this is a team that despite missing Jaire Alexander has still held Russell Wilson, Patrick Mahomes and Kyler Murray to just 34 points in the past three games. That’s seriously impressive.

Dalvin Cook has had success against the Packers before. Last November’s four-touchdown game - in which Cook got 226 scrimmage yards - will be on their mind, but they still managed to win that game and, as recent results have shown us, the defense has improved. The Packers have only allowed 107.2 yards per game along the ground this season and that’ll give them hope that they’ll be able to lock up Dalvin Cook and the threat that he possesses.

It’ll be hard for Kirk Cousins to defeat the Packers through the air too, as they’ve given up just 202.7 passing yards per game, third-lowest in the league. They held Wilson to just 161 passing yards last week and the mighty Patrick Mahomes to just 166 the week before.

Despite throwing for 292 yards against the Seahawks, Aaron Rodgers didn’t throw a touchdown pass. It’s too limited a sample for that to be a concern, especially when this offense is ranked seventh in the league by offensive DVOA. The injury to Aaron Jones needn’t hurt that much. Jones is a great running back, and his pass-catching ability makes him the perfect complement to Rodgers, but AJ Dillon, who’ll now be the lead back, is also a very talented player.

Minnesota is a tough place to go, and Mike Zimmer’s teams are known for tough defenses, but this Vikings D isn’t really fitting that mould. Both the Jaguars and Falcons have given up fewer scrimmage yards per game this season, something which should be a concern ahead of the visit of the Packers.

The Vikings should keep this game close, but ultimately, the Packers have too much about them and Aaron Rodgers should be able to find his grove here. Expect them to cover the modest spread.

The Under leaps off the page as the play for this game. We’ve already discussed the Packers' defense and the ability that they have to shut down opposing quarterbacks. Even with the threat of Aaron Rodgers going off, I can’t see it being a shootout.

The Under is 4-0 in the Vikings’ past four at US Bank Stadium, and recent games with powerful offenses (Cowboys and Browns) have only resulted in a combined 47 points. It’s not just the Vikings who love going Under. The Under is 7-0 in the Packers’ past seven and 5-0 in their past five as favorites.

When the stats and trends both point us in one direction, it’s clear that we should probably be taking the Under.

There are a number of interesting ways to bet this game. Props based on AJ Dillon's yardage and receptions will be of interest, but the truth is that the most appealing price of any is the Packers -2.0.

This is a team that is currently, in my view at least, the best in the NFL, let alone the NFC. This is an elite offense with a quarterback who has a point to prove, who can also rely on a very strong defense to keep them in games if the offense does struggle. I don’t see struggles on Sunday though, and the Packers will cover. 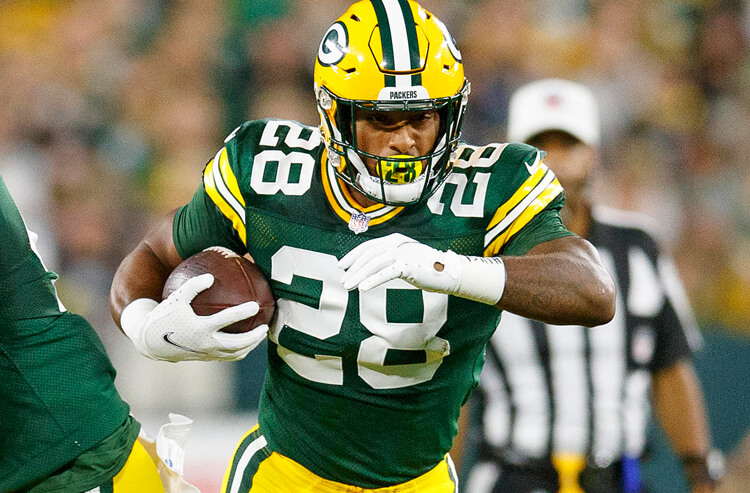 Packers vs Vikings Week 11 Picks and Predictions: Packers Too Thorough for Rivals
Provided by