As we inch through the dog days of November, contenders are starting to gain separation from pretenders, but that doesn't mean any old favorite is a lock. We're navigating the holiday gap with the three best ATS picks getting points in Week 11. 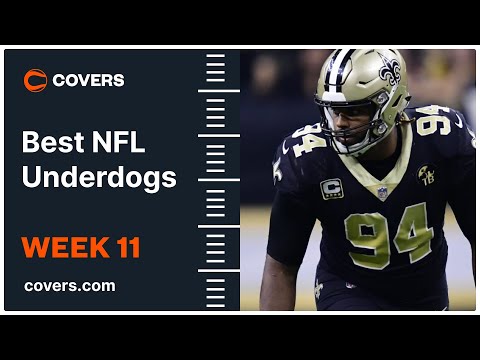 Halloween is but a rotting pumpkin on the steps and your kids' candy stash is down to plain chips and yellow suckers. You could put up the Christmas decorations early - despite the sideways looks you’ll get from your neighbors - but you’ve got to beat the Thanksgiving crowds to the turkey freezer to avoid frantically grabbing any old bird like you’re at the bottom of a dog pile trying to find a fumble.

NFL betting is also in limbo.

We’re well enough into the schedule to separate the contenders from the pretenders, yet not too far along that bum teams are bailing on the season. The standings show at least a two-team race in most divisions, so motivations are a mixed bag in the middle of November.

Resiliency is the key at this point: which teams can take a punch and keep coming forward and which ones are throwing in the towel? So far in 2021, NFL teams have been pretty resilient – at least from an NFL betting point of view.

That brings us to my first free NFL pick of the week, which is possibly the best bounce-back bet in NFL history. And it just so happens that they’re getting the points this Sunday…

Sure, almost all of those bounce-back spots had Drew Brees under center for New Orleans, but NOLA has carried on that tradition of resiliency in 2021 with a 3-0 ATS mark when coming off a loss.

Most recently, the Saints lost to Atlanta in Week 9 and managed to cover as 3-point pups in a 23-21 loss at Tennessee last week. That sets up another rebound spot at Philadelphia in Week 11, with New Orleans catching two points on the road.

The Eagles have hung their hats on their running game in recent weeks, ranking fourth in EPA per handoff since Week 7. However, those ground gains came against defenses ranked 16th, 23rd, 29th, and 32nd in Run Defense DVOA at Football Outsiders – an advanced metric topped by none other than New Orleans. The Saints are going to take the “R” out of Philly’s RPO offense and force Jalen Hurts to beat them with his arm.

New Orleans' pass defense doesn’t look as shiny after run-ins with Tom Brady, Matt Ryan, and Ryan Tannehill the past three games (passer rating of 116.5 allowed in that span). But before that stretch of elite QBs, NOLA boasted a passer rating against of just 73.5 – second lowest in the NFL – and faces Hurts, who ranks 21st in RTG (91.9) among NFL QBs.

With Seattle sitting 3-6 at the bottom of a very competitive NFC West, we get the Seahawks in an ultra rare spot: as home underdogs. In fact, since Russell Wilson showed up in the Emerald City in 2012, Seattle has been a home pup just 11 times, going 7-4 ATS in those games.

Arizona is a worthy favorite in Seattle if the Cardinals are healthy. That's a big "if" with Kyler Murray and DeAndre Hopkins both missing the previous two games. Arizona does have a bye in Week 12 (the tempation of extended rest time for its stars) and head coach Kliff Kingsbury told the media that Murray’s status could come down to a pregame workout on Sunday.

Meanwhile, Seattle is trying to put puzzle pieces together as it struggles to get a complete game from both sides of the ball. Case in point: a 17-0 loss to Green Bay in Week 10. This defense held Aaron Rodgers off the scoreboard until the 10:37 mark of the fourth quarter, but the offense – with Wilson back at QB - picked up only 15 first downs and touched the football for less than 21 minutes.

The Seahawks stop unit stepped up when Wilson went down with a finger injury in Week 5, and owns the sixth lowest EPA per play allowed (-0.060) over the last five weeks. As for Wilson and the scoring attack, we’ll chalk up that shutout loss to rust and bad timing, not to mention some classic Lambeau winter weather.

Before Wilson grossed us all out with his mangled finger versus the Rams, the Seahawks offense was cruising along at 10th in EPA per play (+0.089) and boasting a points per play rate of +0.443 (seventh). Star WR DK Metcalf is dinged up but a home date for a crucial divisional matchup should bring the best out of this offense once again.

The Giants are the hottest underdog bet in football, covering as pups in three straight outings before enjoying a much-needed bye in Week 10. Now this New York team is the healthiest it’s been since Week 5 and catching a butt-load of points in Tampa on Monday Night Football.

It appears as if the Giants will finally have a full complement of playmakers, with RB Saquon Barkley expected to return and QB Daniel Jones having targets like Kenny Golladay, Kadarius Toney, John Ross, and TE Evan Engram at his disposal. Receiver Sterling Shepard is the lone question mark truly on the fence for Week 11.

The Bucs back into primetime on a two-game skid and have barfed up 29 points on defense in each of the past two games, allowing those foes – and not the most dangerous attacks in the NFL – to dominate possession, thanks in part to four interceptions from Tom Brady.

I don’t expect Brady to struggle for long, but he does run into an opportunistic New York defense that has nine interceptions and 14 total takeaways on the year along with a pass defense sitting 11th in DVOA at Football Outsiders.

The Giants have also done the important things too, like limiting third-down conversions (28.21% last three games) and slamming the door in the red zone (23.08 TD% L3/51.35% on the season – sixth best). If New York can finally back up those efforts with some points, it’ll easily stay within this massive handicap on Monday night. 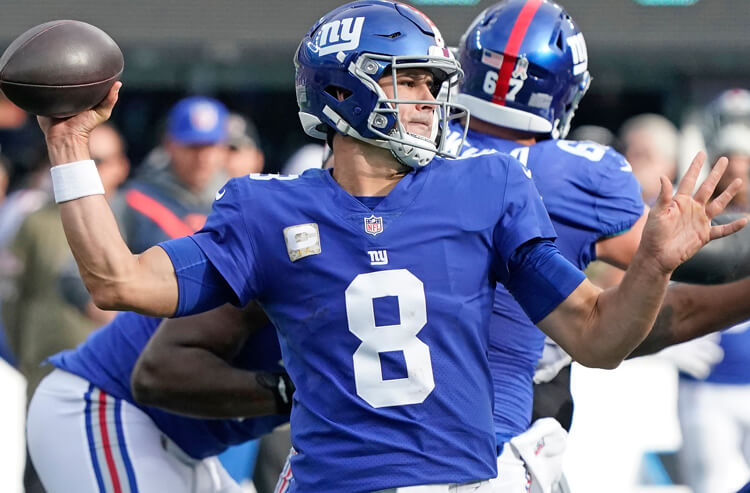