Colts vs Bills Week 11 Picks and Predictions: Back The Most Underrated Team In The NFL

You never quite know what you're going to get with Buffalo, and their opponent this week is one that has the tools needed to catch them slipping in one of Week 11's best matchups. Find out where the value is in our Colts vs. Bills picks and predictions.

Sunday sees a huge game as the Buffalo Bills welcome the Indianapolis Colts to town. The Bills looked like they were locks to reach the AFC Conference Game, but they’ve struggled in recent weeks, meanwhile, the Colts have improved as the season has progressed but still sit two wins back from the Titans in their division.

Let’s take a look at our NFL picks and predictions for the Indianapolis Colts vs. Buffalo Bills.

There’s been no movement at all on the lines since opening. The Bills are still 7-point favorites and the points total still sits at 50. Use the live odds widget above to track any future line movements right up until kickoff and be sure to check out the full NFL odds before placing your bets.

The Colts are 4-0 ATS in their past four games following an ATS loss. Find more NFL betting trends for Colts vs. Bills.

Colts vs Bills picks and predictions

It’s hard to argue that Chiefs-Cowboys is the game of the day but the Colts’ trip to face the Bills isn’t far behind. This is the sort of game that gets the mouth salivating - we’ve got two good defenses and two offenses capable of scoring a ton of points.

The Bills sit atop the AFC East with a 6-3 record while the Colts are 5-5 in the AFC South. The Bills were expected to blast their division apart, but the Patriots also have six wins and have been much better than we thought. The Colts have things even tougher, they’re two wins back from the Titans who are 8-2 and tied for the league’s best record.

The Bills dismantled the Jets by a 45-17 scoreline. However, they’d lost two of their three games before that, to the Titans and more worryingly, the Jaguars.

Last week, the Colts beat their divisional rivals, the Jaguars, by six points, giving them four wins in their past five games. Their only loss in that timeframe was a narrow three-point loss to Tennessee.

Not many teams are as confusing as the Bills. At times this season, they’ve looked like the best team in the NFL and then they’ve also stumbled to defeats to the Jags, Steelers, and Titans. We’ve seen them top 40 points on three occasions this year but despite the deep threat ability that Josh Allen poses, the Bills are still 13th in terms of weighted offensive DVOA.

Last year, we saw Josh Allen take a huge leap forward and become one of the NFL’s best quarterbacks, helping the Bills reach the AFC Championship game. Allen hasn’t consistently been at the same level this year and it’s been the Bills’ defense who have carried them at many points throughout the season.

Sitting at the top of the tables in terms of defensive DVOA, the Bills’ defense is a match for any team in the league. Nobody has given up fewer points than them, a mere 135 through nine games. That defense has given up the second-lowest average yardage per game through the air, behind only the Panthers, and third-lowest average yardage along the ground. They’re a well-coached unit that Leslie Frazier has made formidable in every aspect of the defense.

The Colts don’t compare statistically with the Bills on defense; they’re ranked ninth on defensive DVOA, as opposed to first, and they are one spot behind on offensive DVOA, 14th to the Bills 13th. I’d argue that those stats don’t tell the who story, at least on offense. It took a number of weeks for the Colts to get their offensive line looking remotely healthy and you simply can’t overstate the importance of the line.

Now the Colts line is back in action, and they’ve become a powerhouse. Jonathan Taylor has been fantastic this year but it’s important to give the line its credit when it comes to his success. Taylor is averaging 6.9 yards per carry against stacked boxes (20 percent of his runs) and he’ll need that line to be at their very best against the Bills’ incredible rush defense.

The Bills are favorites for this game, but the Colts seem to be the much better value play. Being able to get them at +7 at -105 is something I won’t pass up.

We’ve talked about the explosive power that the Bills possess on offense and when it clicks, it clicks. They face a Colts team who have the ability to beat you on the ground with Jonathan Taylor or through the air with Carson Wentz developing great chemistry with Michael Pittman who has been great in recent weeks.

With two offenses on the field who both have the potential for high scoring, it makes sense to take the Overs. The trends also back this up, with the Over going 4-0 in the Colts' last four games following an ATS loss. The Over is also 5-0 in their last five on the road against a team with a winning home record. I’m fairly confident that we’ll see the Over hit here.

I’ve already outlined why the Colts +7 is great value but I’m going to go one further and recommend backing the Colts to win on the moneyline. In my view, the Colts are the most underrated team in the league. They’ve had a tough schedule and were unlucky with injuries to their offensive line earlier in the season.

Now everything is starting to click, they’re getting healthier, and Carson Wentz is starting to find some of the form we saw early in his Eagles career. This is a team who’ll continue to upset the odds over the coming weeks and I think they’re a more consistent team than the Bills which makes it easier for me to trust them with my money this week. 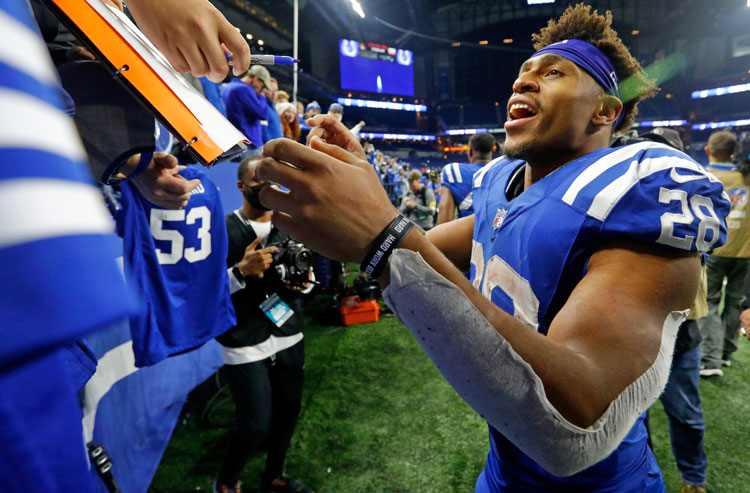 Colts vs Bills Week 11 Picks and Predictions: Back The Most Underrated Team In The NFL
Provided by