The Eagles' ground game has grown in recent weeks, but it will get put to the ultimate test against the Saints, who top the NFL in Run Defense DVOA. Find out where the best value lies in our NFL betting picks for Saints vs. Eagles.

The Philadelphia Eagles have developed into one of the best rushing attacks over the past four weeks and will put that ground game to the test against a run stop unit that has been the standard in the NFL for the past decade.

The Eagles host the New Orleans Saints in Week 11 and the NFL betting odds have installed Philadelphia as a 1.5-point favorite, coming off an impressive road win in Denver last Sunday. New Orleans, on the other hand, came up short on a 2-point conversion in Tennessee and has dropped back-to-back outings.

Check out our NFL free picks and predictions for Saints at Eagles on November 21.

Philadelphia hit the board at -1.5 (-110) but early play is starting to show up on New Orleans, which has swayed the vig to Saints +1.5 (-114) at some books while other operators are dealing a flat -110. The total opened at 44 points and has dipped to 43.5 as of Tuesday. Use the live odds widget above to track any future line movements right up until kickoff and be sure to check out the full NFL odds before placing your bets.

Saints vs Eagles picks and predictions

Philadelphia has finally figured out an identity on offense, with the RPO-heavy playbook producing solid results with the run. The Eagles rank No. 4 in EPA per handoff since Week 7 at +0.031, with the three-headed beast of Boston Scott, Jordan Howard and dual-threat QB Jalen Hurts keeping legs fresh turning on those carries.

Those ground gains did, however, come against some piss-poor rush defenses ranked 16th (Las Vegas), 23rd (Denver), 29th (Detroit) and 32nd (L.A. Chargers) in Run Defense DVOA at Football Outsiders. Enter the Saints, who have long been the premier run stop unit and hold the top ranking in that advanced defensive metric (No. 1 in Run Defense DVOA) and limit foes to a measly 3.1 yards per carry on the year.

That puts pressure on Hurts to hold this offense up with his passing game, which is very hit and miss in his second year as a pro. He’s thrown for more than 200 yards just once in his last six games and while he did have nice strikes to rookie WR DeVonta Smith last Sunday, those were surprise shots from an offense that threw just 16 times.

New Orleans won’t get caught off guard in Week 11, shutting down the ground and dictating the Philadelphia offense, forcing Hurts to test a secondary that has faced much higher caliber QB competition over the past three weeks.

NOLA has taken on the likes of Tom Brady, Matt Ryan and Ryan Tannehill since Week 8, with a passer rating of 116.5 allowed in that span versus a season-low RTG of 86.5 against. This Sunday is a downshift in gears for the Saints’ stop unit, which will lead the way to a bounce-back performance in Philly.

The Saints didn’t get the win in Week 10, but the offense performed better than you’d think, even with dynamic RB Alvin Kamara on the sideline. New Orleans outgained Tennessee by 109 yards and if not for missed extra points on their first two touchdowns, the Saints wouldn’t have been in a spot to go for two points at the end of the game.

The QB combo of Trevor Siemian and Taysom Hill have held this thin passing attack together with duct tape and good thoughts and it looks like Kamara could be back from a knee sprain in Week 11. The injury isn’t considered serious and he sat out practice last week and the Week 10 game versus Tennessee, so there’s been plenty of time to heal up for this matchup with an Eagles defense that struggles against the run.

This is a very low total on the board and while both offenses have their troubles, they don’t miss out on a scoring opportunity – ranked fifth (NOLA) and sixth (Philly) in TD percentage inside the red zone. The Saints are second in RZ Offense DVOA while the Eagles come in at No. 6 in that advanced stat.

New Orleans has topped the total in three straight outing and five of its last six games, playing Over similar low numbers. Philadelphia is 3-1 O/U in its last three contests.

Philadelphia has played its best football away from home but has been miserable in the Linc, currently sitting 0-4 SU and 1-3 ATS as a host. The Eagles own an average points per play margin of -0.044 at home (compared to +0.146 on the road) and crazy enough have registered just one of their total 18 sacks on the season in front of the Philly faithful.

With some books dealing a heavier price tag on the Saints +1.5, this spread could easily get pushed over the fence and close with New Orleans as a road favorite – especially once/if Kamara is announced active. We’re getting ahead of that movement with an outright play on NOLA to snap this two-game skid. FYI: New Orleans hasn’t lost three straight games since Week 3 of the 2016 season. 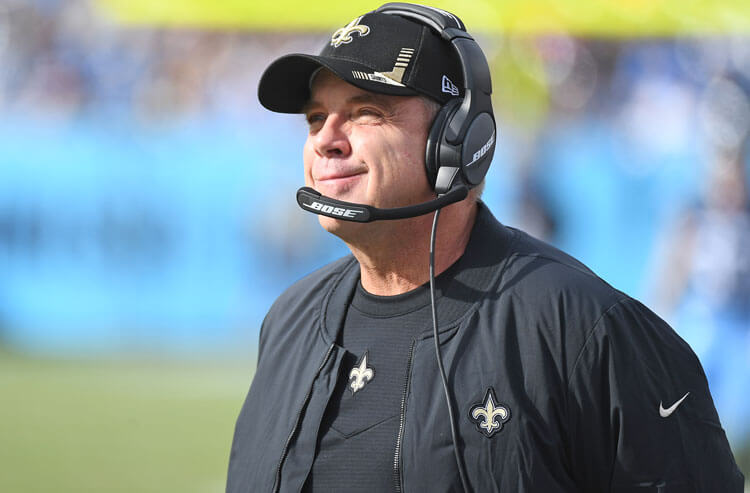