Ravens vs Bears Week 11 Picks and Predictions: Will The Bears Halt Their Slide?

We're all still pretty shocked by the rotten egg the Ravens laid against Miami in Week 10, which makes this game that much more important for Baltimore. Find out if they can get right against a lackluster Bears defense in our Ravens vs. Bears picks.

The Baltimore Ravens needs to bounce back after being humbled by the Dolphins on Thursday Night Football of Week 10. They come up against the Chicago Bears, fresh out of a bye week, looking to end a four-game skid.

Will the Bears be rejuvenated, or will they struggle against the famous Ravens ground game? Don’t miss our NFL picks and predictions for the Baltimore Ravens vs. Chicago Bears.

There’s been a quite large movement on the line with the Ravens opening at 6-point favorites before getting shortened into just 4.5-point favorites. Despite the movement on that market the total points line has remained steady at 45 since opening. Use the live odds widget above to track any future line movements right up until kickoff and be sure to check out the full NFL odds before placing your bets.

The Bears are 0-5 ATS in their last five home games against a team with a winning road record. Find more NFL betting trends for Ravens vs. Bears.

Ravens vs Bears picks and predictions

If you’d have asked who’d have won this game after Week 9 then you’d push all your chips in favour of the Baltimore Ravens, but their primetime defeat to the Miami Dolphins has made us think twice.

The Ravens travel to Soldier Field in need of the win. The slip-up has given the rest of the AFC North a chance at winning the division. The tightest division of them all, with the possible exception of the AFC West, see the Ravens on top with six wins, however behind them are the Steelers, Bengals and Browns, with five wins each. It’s incredibly tight and each team will have serious ambitions of reaching the playoffs.

Lamar Jackson has taken another leap forward this season. We know all about his ability on the ground, but he truly is a dual-threat quarterback, and his passing looks better in 2021 than it has at any other time in his career. He’s eighth in the NFL in passing yards with 2,447 already and has thrown for 14 touchdowns. To put that into context: he had only 310 fewer passing yards than through 15 games last year. The offense is more balanced, and he’s gotten the help he’s needed from his receiving corps, including Marquise Brown who has taken a leap and rookie Rashod Bateman, whose averaged over 60 yards per game.

The Ravens’ offense, ranked ninth by weighted defensive DVOA should be able to perform well against the Bears whose defense, ranked 23rd by defensive DVOA, hasn’t really lived up to the billing this year. The Bears have the ninth-worst record against the run allowing an average of 122.8 yards per game on the ground, something that Greg Roman, Ravens offensive coordinator, will look to take advantage off.

The Bears’ offense can take lessons from how the Ravens use Lamar Jackson. Since Justin Fields got thrust into the starting line-up, he’s made several mistakes as rookies commonly do, but he’s also shown some of the abilities that saw him perform so well at Ohio State. It feels like the Bears are only just beginning to scheme with him in mind and put him in the best position to succeed, having made a mess of it during his first few games. Before the bye, we saw Fields have his best game yet as a Bear, throwing for 291 yards and a touchdown and adding another 45 yards on the ground. That ability to escape the pocket on his feet is something that could make Fields a star in this league but they need to find the right balance.

Fields and his Bears teammates have a chance against the Ravens who don’t have a top-tier defense this year, something that’s been a part of their identity for a long, long time. They’re ranked 21st in weighted DVOA behind the likes of the Seahawks, Dolphins and Texans and it could eventually catch up with them. It’s brilliant to have an offense capable of rolling over people but you can’t rely on it every game and need a strong defense to carry the load. That defense is what will ultimately stop the Ravens from winning the Super Bowl but it should be enough to secure a win here. I’m not confident either way but I’d likely back the Ravens to bounce back after last week’s defeat and to cover the small number in the process.

This one is another tight call with the line looking just about right. I’d side with the Under though. Both offenses are capable of stalling, we saw it with the Ravens just last week where they only managed to put up 10 points against a poor Dolphins defense and we’ve seen it from the Bears at times this season too. You don’t feel confident in both offenses having a big day so it’s probably best to take the Under.

Of the past seven road games for the Ravens, we’ve seen the Under go 6-1. Likewise, the Under is also 5-1 in the Bears' last six against a team with a winning record. The trends are directing us towards taking the Under, so we’ll do it, despite not being hugely confident.

There's one man who leaps straight off the screen for this matchup, and that's Cole Kmet. Kmet was taken in the second round of last year's NFL Draft but the 6-foot-6 former Notre Dame man is only just beginning to feel like a key member of this offense.

We all know the cliche about rookie quarterbacks loving their tight end but there does seem to be a legitimate connection between Fields and Kmet. In the first five games of the season, Kmet had 19 targets and turned that into 81 yards. In his past four, he&rsquo;s had 25 targets and turned that into 203 yards. This is a man finding his form and he should perform well against the Ravens who have given up an average of 71.89 yards per game to tight ends this season, with only two teams in the league allowing more.

There are a few Kmet bets worth hammering, the anytime touchdown where Kmet could score his first of the season, but the one we'll be backing is the receiving yards. This is a game where Kmet should thrive and put up some good numbers. 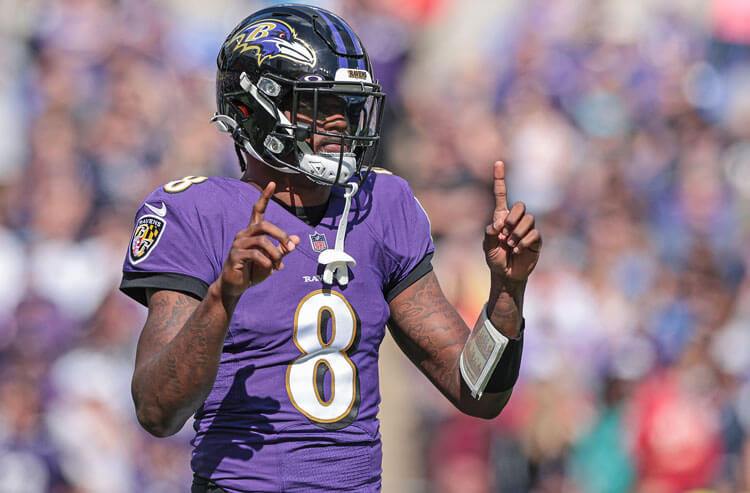 Ravens vs Bears Week 11 Picks and Predictions: Will The Bears Halt Their Slide?
Provided by