Chiefs vs Titans Week 7 Picks and Predictions: Can Tennessee Do It Again at Home?

The Titans pulled off the home upset last week and will look to do it again, as the Chiefs head to Tennessee. With Kansas City coming off an impressive win of its own, which way will this one go? Find out with our NFL betting picks.

Two teams fully dependant on their offense will clash on Sunday in Nashville, as the 3-3 Kansas City Chiefs travel to face the 4-2 Tennessee Titans.

After briefly playing down to its opponent's level, Kansas City scored three times in the final 20 minutes against Washington last week to win decisively, 31-13. Tennessee, meanwhile, had its statement win of the season so far in Week 6, holding off a 4th down attempt from the Buffalo Bills to win 34-31 in primetime.

How will these two teams, with such similarities, play out on October 24? Find out with our free NFL betting Chiefs vs. Titans picks and predictions.

The line opened, on Monday morning, at Chiefs -4.5 and didn't move despite the Titans' MNF win over the Bills. Action on Kansas City moved the line to -5.5 during the week but has since been bet down to between 4.5 and 5.0 as of Thursday evening, depending on the book. An already high total of 56.0 was, as expected, bet up as action on the Over saw it grow to 57.5.

The Over is 7-3 in the last 10 games between the Chiefs and Titans. Find more NFL betting trends for Chiefs vs. Titans.

Boy, did the Chiefs ever need that. After going into halftime in Washington down 13-10, Kansas City's defense stepped up out of the break, limiting WFT to 76 second half yards and no points. Combined with three straight touchdown drives out of Patrick Mahomes and the Chiefs' offense, and Kansas City left DC with its best win of the year.

That win pales in comparison to the one the Titans put together on Monday Night Football, going toe-to-toe against a high-level Bills offense and bringing an esteemed Buffalo defense back to earth in a 34-31 win. However, while a massive win for the Titans, it's difficult to come away thinking Tennessee is among the conference's elite.

The Bills nearly doubled Tennessee's first downs (28-16) and outgained the Titans 417-362, a margin that could have been significantly larger if not for a 76-yard touchdown run from Derrick Henry (though perhaps it's long past time to stop taking massive TD runs from Henry as outliers). The Titans were also a perfect 3 for 3 in red zone trips, despite entering the week with a bottom-10 red zone rate of 56.5 percent.

The details surrounding the Titans' win over the Bills make it difficult to believe they'll keep it going against Kansas City in Week 7. It wasn't as impressive as the result suggests, and in the Chiefs, they meet a team with the same strengths — but considerably better. To take Tennessee to cover, we would need to believe the Titans' offense is close to as lethal as the Chiefs', and that Mahomes' turnover woes will continue. To believe either would be foolish.

The Chiefs are the superior team and in two of three wins on the year, they've been able to pull away late and win by multiple scores. Tennessee isn't good enough to keep it close wire-to-wire, and Kansas City will do enough to cover.

Yes, 57.5 is a seriously high total facing the Chiefs and Titans on Sunday, but it's tough to make a case for the Under that goes deeper than "sometimes sports are wonky". In this game, we have two high-scoring offenses, one of which is led by the best quarterback in the NFL, and two dreadful defenses.

The Chiefs' offense is second in DVOA at Football Outsiders, despite a continued commitment to a pedestrian running game. They average 30.8 points per game (fifth in NFL), 6.4 yards per play (third), and 3.24 points per drive, by far the most in the NFL.

Kansas City's offense will be tasked with outscoring a Titans attack that's no slouch, either. Tennessee is 14th in offensive DVOA (boosted by an obviously elite and fourth-ranked running game), eighth in points per game (27.7), and 10th in points per drive (2.48). While it's just 21st in yards per play, that's a metric tanked by a poor offensive line ranking fifth in adjusted sack rate. However, a theme in this matchup, that's an issue mitigated by a toothless Chiefs pass rush with the third-lowest adjusted sack rate in the NFL.

Aiding both offenses will be the defenses — or lack thereof — they are facing. The Chiefs are 31st in defensive DVOA and allow a league-worst 40.41 yards and 2.86 points per drive. The Titans, while an '85 Bears redux in comparison, aren't good either, with the 28th ranked D by DVOA. Tennessee allows 36.2 yards and 2.44 points per drive, both in the bottom half of the league and likely to drop further after a dance with Big Red and Kansas City's offense.

Hopefully, you jumped on the Over before it was, predictably, bet up from the opening number but either way, don't overthink this. The elite offense/dreadful defense combo has seen Kansas City go Over 57 four different times this season (and a 54 mixed in), while Tennessee's topped 57 twice and finished a third on 56.

Mahomes is, without question and in contradiction to some truly absurd takes in recent weeks, the best quarterback in the NFL and possibly the greatest ever talent at the position.

Mahomes has gone Over 323 passing yards in three games this season, including in a season-high 397-yard performance last week against Washington. The Chiefs' passer is going to need to move the ball and score at a high rate, and he'll get to do so against a Titans defense that ranks 27th in passing defense DVOA.

Similar to the total, I see no reason to overthink this. Mahomes is going to be throwing at a high volume, especially with Clyde Edwards-Helaire out, and he'll be doing so against a horrible defense. Let the league's greatest talent reward you with another great showing, in which he goes Over 323.5 passing yards. 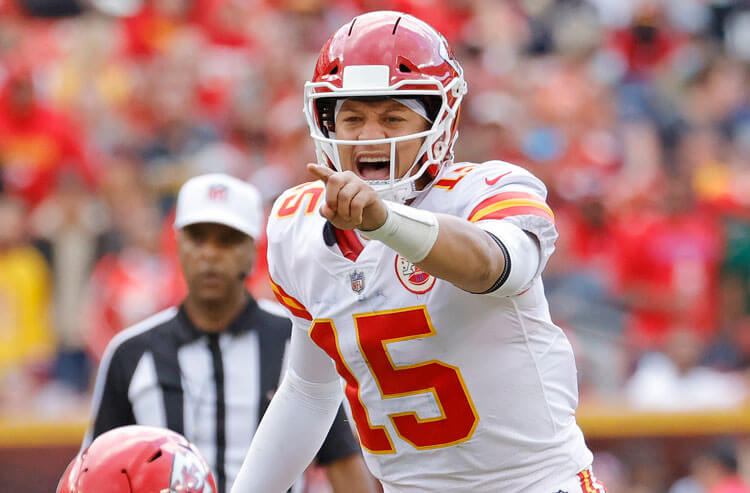 Chiefs vs Titans Week 7 Picks and Predictions: Can Tennessee Do It Again at Home?
Provided by