NFL Power Rankings Week 12: Eagles Starting To Pay Off All The Betting Support

Check out Adam Chernoff's weekly NFL power rankings, where he rates every team from No. 1 to No. 32, while highlighting the cream of the crop — and those tumbling down — ahead of Week 12 action.

Power rankings are an important part of NFL betting, used not only by bettors but also by bookmakers when setting NFL odds. After Adam Chernoff revealed his preseason rankings, he now updates his rankings weekly, based on the previous week's NFL action.

Check out the Week 12 rankings below, or listen to a full audio analysis on The Simple Handicap podcast for every NFL club... from No. 1 to No. 32.

The power rankings below show how much better or worse a team is relative to a league-average team on a neutral field. For example, if a team has a rating of 3 and is playing an opponent with a rating of -2, the higher-rated team would be favored by 5 points (before adding home field). Once you add in the home field advantage (HFA) value to the neutral field spread, you get the market point spread.

Compare updated Super Bowl futures before betting to ensure you get the best number.

The Philadelphia Eagles have received more professional money on a weekly basis than any other team in the league. Week, after week, after week this season they have been bet — but the last four games have seen them actually turn the corner on the field.

From a team rated nearly a field goal below average, I have upgraded them six full points. The offensive shift by Shane Steichen has been problematic for opposing defenses to deal with, as the Eagles rank first in points per drive, rush yards per game, explosive rushes, third-down conversation rate, yards per drive, overall success rate, and total QBR during this four-game stretch.

Last week against New Orleans was a big test... and the Eagles passed easily, running for north of 200 yards. Jalen Hurts is dynamic and the connection with DeVonta Smith is difficult to stop. With the easiest remaining schedule in the league, a playoff run is on the horizon for the Eagles — and professional money will back them each step of the way.

My opening ratings for the season had New England inside the Top 10, to much chagrin from readers. After a brief stint in the 11-13 range, the Pats have returned this week. In a similar way the Eagles have bullied the NFC, New England continues to run over opponents in the AFC.

Since an overtime loss to Dallas in Week 6, the Patriots put up 54 on the Jets, 27 at L.A. Chargers, 24 at Carolina, 45 vs Cleveland, and 25 in a shutout win at Atlanta. With the defense playing at its best level yet, holding opponents to 13 points in the last 13 combined quarters, New England is looking dominant on both sides of the football.

When it comes to clutch high leverage downs, are we ready to put Mac on the same level as Mahomes? I am not so sure about that. One thing is certain, though: The way the Patriots run their offense, with a 50 percent early-down run rate, Mac Jones will find himself needing to pick up many more third downs the rest of the season.

The Bills have spent more time in the top spot of my power rankings this season than any other team. After beating the Chiefs in mid-October, they made the leap. In the five games since, they have won just two of five games (Jets and Miami) and covered only one (Jets). When looking at the body of work for Buffalo, it is easy to poke holes.

No team to date has played an easier schedule of opponents than the Bills, yet they sit 6-4 overall and have failed to exceed expectations in going just 5-5 against the spread. Offensively, their numbers have dropped too. For the first six weeks of the season, Buffalo was near the top of the standings on both offense and defense — now its rank is now fringe Top 5 on both sides of the football. Buffalo led the league in expected points off turnovers the first eight weeks of the season, and now the turnovers have dried up and breaks are going the other way.

It is a cold run for the Bills, however — we have seen similar slumps from all other AFC contenders this season. Kansas City lost multiple games in a row and was written off. Tennessee is now crumbling. New England was disregarded to begin the year. The Chargers could not score for three weeks after drawing high praise. The Broncos had "the best roster in the NFL" and now are on the outside of the playoffs looking in. Remember Cleveland and Baltimore? Where did they go?

In a tumultuous year, the Bills are falling victim to a bad run. I am not selling this coaching staff and offensive roster just yet.

Week 13 will see the Bills host the Patriots in what will be a massive game for AFC Playoff implications. My ratings this week make Buffalo a 2.5-point favorite on a neutral field. Early look ahead numbers have Buffalo a 3.5-point favorite.

One professional betting group I speak with has gone out of their way to do something uncharacteristic — and bet the look-ahead line on New England at +3.5.

Sportsbooks have responded by dropping the price in favor of New England. How the Bills perform against the Saints, and the Patriots versus the Titans, will go a long way in shaping the line on December 6.

How to make NFL power rankings

Oddsmakers and professional bettors alike have their own NFL power rankings and you should as well. It's not an overly complicated process, especially not when you use the 0-100 method. Learn how with our guide to creating NFL power rankings. 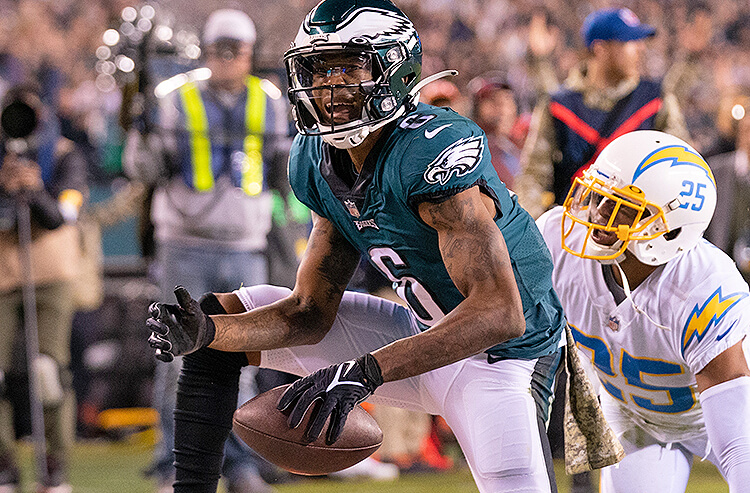 NFL Power Rankings Week 12: Eagles Starting To Pay Off All The Betting Support
Provided by