Washington vs Packers Week 7 Picks and Predictions: Rodgers Adds to His Ownership Portfolio

Aaron Rodgers and the Packers continued their ownership of the Bears last week. They'll keep crushing teams as the Washington Football Team visits Lambeau on Sunday but find out if the WFT offense can do enough to help hit the Over with our picks.

Big things were expected for the Washington Football Team this season but so far, they’ve failed to live up to their expectations. That’s in contrast to the Green Bay Packers, who started off the season with a humiliating loss but have now won five games in a row to lead the NFC North.

Can the Football Team get back on track, or will the Packers continue their march to the playoffs? Get ready for the big game by reading our NFL picks and predictions for Washington vs. the Packers.

The total points line has stayed consistently at 49 points. However, the Packers have moved a massive 2.5 points from 10-point favorites to just 7.5-point favorites. Use the live odds widget above to track any future line movements right up until kickoff and be sure to check out the full NFL odds before placing your bets.

The Packers are 5-0 ATS in their last five games. Find more NFL betting trends for Washington vs. Packers.

Last year, it really looked like the Washington Football Team were building towards being something. They reached the playoffs and gave the eventual Super Bowl champions, the Bucs, a tough game. Most expected them to kick on this season and challenge the Cowboys for the division, but they’ve struggled.

The defense was everything last year. Chase Young was the Defensive Rookie of the Year and he was one of a number of players who had given WFT their new identity. That new identity hasn’t lasted at all. This is a team now ranked 29th in the league in defensive DVOA and has given up the second-highest yards per game, trailing only the Seahawks. Their secondary is being burned constantly, giving up a league-worst average of 309.5 passing yards per game.

A team struggling with defense shouldn’t be happy about visiting Lambeau Field, especially when the Packers are playing like this. They’ve won five games in a row, lead their division by two wins, and are potential conference winners.

Washington Football Team won’t win this game on Sunday. All of their offensive playmakers are questionable at best. Antonio Gibson has been a non-participant at practice and their star Terry McLaurin is dealing with a hamstring injury, something which historically lingers with wide receivers.

The real question here is whether WFT can cover the spread. It started at 10 points and has shrunk to 7.5 points but there is little doubt in my mind that the Packers win by well over a score. If you consider how Patrick Mahomes picked this team apart last week, then it’s hard to imagine Aaron Rodgers not doing similar. Last week, they allowed the Chiefs 499 yards of offense, which simply isn’t contusive to covering in games, let alone winning them.

Through this season’s six games, the WFT are 1-5 ATS, with the Packers currently 5-1 ATS. Both teams are playing at very different levels and the Packers simply cannot be touched unless we see something from the Football Team that we haven’t seen all season long.

Washington sits 21st in the league in offensive DVOA but its banged-up team has put up some reasonable scores throughout the season. The concern here is that last week they only managed 13 points against a Chiefs defense which is laughably bad.

As injuries have picked up, it’s really hurting WFT’s dynamism, and the replacements aren’t up to the same level as those who are injured. Last year it looked like Antonio Gibson could become the new Christian McCaffrey, but he’s been carrying an injury and looks devoid of any movement or agility. McLaurin too has struggled in the past two games, averaging just 37 receiving yards, compared with the 88.5 yards per game he was averaging in the previous four games.

As dominant as the Packers will be, they’ve only scored 30+ points once this season, against the Lions, and have steadily scored in the mid-twenties. Even with the likelihood that they perform well against the WFT, you can’t expect the high total of 49 to be beaten. Take the Under here because the Football Team won’t do enough for the Over to cover.

Robert Tonyan hasn’t had a great 2021. He broke out for the Packers last year scoring 12 touchdowns as they marched to the NFC Championship game. This year has been very different. He’s been held to 10 receiving yards or less in five of his six games and only scored the one touchdown, coincidentally in the only game he exceeded 10 receiving yards, when he torched the Lions for 52 yards.

He’s still been targeted by Rodgers. Indeed, he was targeted seven times in their Week 4 win over the Steelers, but he’s only managed to haul in 11 of 20 targets. I’m expecting that to change against this awful WFT secondary. Washington ranks 25th in the league for yardage allowed to tight ends, averaging 63 yards per game. When they faced an elite quarterback in Patrick Mahomes last week it was Travis Kelce, his tight end, who led the team in receiving yards. Tonyan won’t lead the Packers in receiving yards, but he’ll have a good game and cover, so take the Over on his receiving yards now. 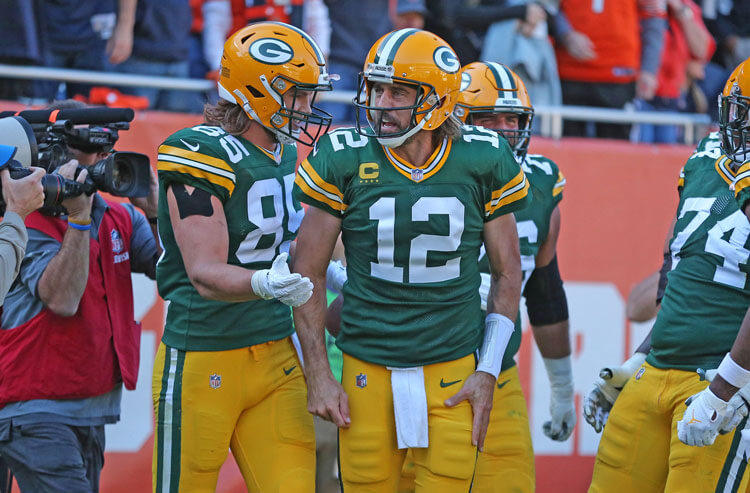 Washington vs Packers Week 7 Picks and Predictions: Rodgers Adds to His Ownership Portfolio
Provided by