The Panthers will carry a three-game losing skid into New York on Sunday, as CMC's injury and the defense's disappearance derailed a bright start. Find out if Carolina can get back in the win column against the Giants with our NFL betting picks.

The Carolina Panthers will attempt to flip their fortunes once again when they visit the New York Giants in Week 7.

The NFL betting odds have the Panthers as field goal favorites, bringing a three-game slide into MetLife Stadium after starting 2021 with a 3-0 record. New York is desperately trying to get healthy bodies on the field, losing two straight with a long list of key players dinged up.

Check out our NFL free picks and predictions for Panthers at Giants on October 24.

New York opened as a 2.5-point home underdog and that number ticked up to +3 with early play on the Panthers and injury concerns for the Giants, especially on offense. This total opened at 44 points and has since slimmed to 43 as of Wednesday.

The Panthers are 8-1 ATS in their last nine road games. Find more NFL betting trends for Panthers vs. Giants.

The Panthers' wheels have wobbled big time since Christian McCaffrey went down but this three-game skid is not all on the dynamic running back's absence. Carolina’s schedule stiffened after a soft entry into 2021 and the defense has lost some of its shine, posting an EPA per play of +0.032 over the past three outings (15th in that span).

Matt Rhule’s team has a chance to get right on the road against a Giants squad running out of options on offense. This attack looked like it was starting to gel, then injuries to Saquon Barkley, Daniel Jones, Kenny Golladay, and rookie WR Kadarius Toney mushed that progression, leaving them thin at the skill positions against one of the more dangerous defenses in terms of aggression.

Carolina thrives on chaos, causing pressure on 28.6 percent of its opponent's dropbacks while collecting 16 sacks and blitzing more than 34 percent of passing plays. Heat will be on Giants QB Daniel Jones, who started Week 6 after suffering a concussion in Week 5. He struggled against the Rams last week, completing 29 of 51 passes for 242 yards, no touchdowns, a fumble, and three interceptions.

The struggling offense is getting zero help from the New York stop unit, which ranks 25th in defensive DVOA at Football Outsiders. Sure, the Giants are coming off games against offensive juggernauts L.A. and Dallas, but this defense also gave up big days to Washington and Denver this year.

The Panthers' offense has been painfully inconsistent and really bad without McCaffrey keeping defenses guessing, but with the injuries stacking up for the G-Men and a defense unable to slow opponents, we’re leaning to Carolina in Week 7.

Right now, the Panthers are 3-point favorites but once the injury reports update, on which I suspect Barkley, Golladay, and Toney are ruled out eventually, this line will tick up to -3.5. We’re taking Carolina now and avoiding laying any more points than we need to with this team.

If nursing a concussion wasn’t bad enough, Daniel Jones just lost one of his top protectors in tackle Andrew Thomas.

The Giants' offensive line has been a game of musical chairs all season and was holding it together before getting blasted by the Rams' pass rush in Week 6. Los Angeles sacked Jones four times and pressured the QB on 16 of his 56 dropbacks last Sunday. You can bank on a similar scene this week with Carolina unleashing hell on opposing passers.

Giants OC Jason Garrett is going to have to keep things quick and short in order to protect Jones from another disaster of a day. And when he does get rid of the ball, the options are somewhat limited due to New York’s top three skill players being out of action.

The Panthers' offense is far from the picture of perfection, with QB Sam Darnold stuck in a nasty rut during this three-game losing streak. Darnold boasts a passer rating of 62.1 in this span – lowest in the NFL – with six interceptions and 12 sacks taken. He hasn’t been on the same page as his receivers - which is a two-way street – with Robbie Anderson dropping passes and D.J. Moore also bobbling balls.

Carolina has thrown the ball on almost 63 percent of its offensive snaps over those three losses, compared to only 54.85 percent in the opening three games. Following Sunday’s overtime loss to Minnesota, Rhule told the media the Panthers aren’t handing off enough – Run CMC or not – and to expect a very ground-heavy approach in Week 7.

That’s music to the ears of Under backers, with both offenses chipping away with short gains and the clock ticking.

Following up on Rhule’s take on the run game, the Panthers head coach specifically stated, “We're going to run the football, and we're going to protect our quarterback, and we're not going to turn the ball over anymore. And that's the only way that we're going to win."

That means taking the ball out of Darnold’s hands and giving Chuba Hubbard a lot more touches. The rookie RB rushed only 16 times for 61 yards in Week 7 but has 24 carries for 101 versus Philadelphia the game before.

New York allows 4.5 yards per carry to opponents and has seen a ton of run over the past three games, watching those foes handoff an average of 37.3 times. Carolina is at its best when it grinds out yardage and eats a lot of possession, which is what we’ll get if Rhule sticks to his guns on offense. 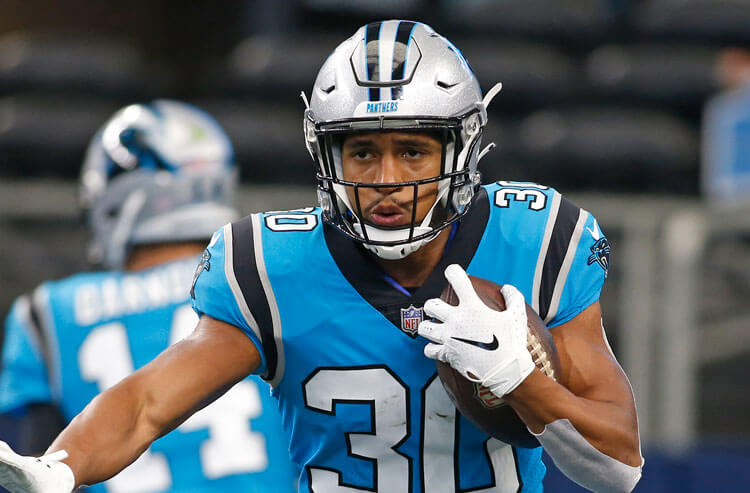 Panthers vs Giants Week 7 Picks and Predictions: Injuries Continue to Mount for New York
Provided by