Bengals vs Ravens Week 7 Picks and Predictions: Bengals And Ravens Ready For War

The Bengals head to Baltimore in a key AFC North matchup. The Ravens are 6-point favorites at home but do they have what it takes to cover against Joe Burrow and this much improved Bengals squad? Find out in our Bengals vs. Ravens picks.

Sunday sees a massive clash in the AFC North with the top two teams facing off against one another. The Bengals travel into Baltimore to face the Ravens and attempt to end their five-game winning streak.

The Bengals are hugely improved this season with the chemistry between Joe Burrow and Ja’Marr Chase flourishing, meanwhile Lamar Jackson is having an MVP level season. This is going to be an absolute war but who will come out on top?

Find out now in our NFL picks and predictions for the Cincinnati Bengals vs. Baltimore Ravens.

The Bengals are underdogs in this game but have seen some support. The Ravens opened as 6.5-point favorites but have shortened into 6-point favorites. The total has dropped on this game too, from 47.5 to 47. Use the live odds widget above to track any future line movements right up until kickoff and be sure to check out the full NFL odds before placing your bets.

The Under is 5-0 in the Bengals' past five games. Find more NFL betting trends for Bengals vs. Ravens.

When the season started and the Raiders beat the Ravens it looked like there could be real trouble in Baltimore. Since then, they’ve won five straight including important wins against the Chargers and Chiefs, two of the AFC’s top teams.

Last Sunday the Ravens put on a clinic as they beat the Chargers 34-6. It was a real statement and has firmly put them in the middle of the Super Bowl conversation. Speaking of conversations, there’s another one which is raging and that has Lamar Jackson firmly in the mix for the league’s MVP after six weeks. He’s been throwing touchdown passes, rushing for more, and generally looking as clutch as any other QB in the league.

The Ravens are 9th in offensive DVOA, 10 spots ahead of the Bengals but in terms of points scored they’re fairly close. The Ravens having only scored 22 more points, meanwhile the Bengals have given up 12 points less in six games.

In terms of defensive DVOA there are only four teams rated higher than the Bengals who sit 5th in the rankings, nine spots ahead of the Ravens. The Bengals sit on a 4-2 record but they’ve managed to limit every team they’ve faced, with the 25 points the Packers put up in Week 5 being the most any team has scored on them this year.

They’re still a team in transition but they look stronger nearly every week. Joe Burrow is now playing near his best and no longer inhibited by his season ending injury last year. He’s got so much potential and his connection with his former LSU teammate Ja’Marr Chase already looks like one of the most telegraphic QB to receiver partnerships in the league.

Heading into Week 7 there are only three wide receivers with more receiving yards than Ja’Marr Chase, those being Davante Adams, Cooper Kupp and Tyreek Hill. That’s the sort of elite company that the rookie is amongst and he’s looking like he could break all sorts of records this year.

It’s hard to look beyond the Ravens to win this game, they’re in great form and on a brilliant run but this Bengals team can’t be taken for granted. Joe Burrow will give the Ravens defense an incredibly tough game and Ja’Marr Chase can cause problems for any secondary in the league. They face a Lamar Jackson who is in the form of his life, so it’s a tough one to call. I’m taking the Bengals to stay within striking distance, even if they ultimately don’t have enough to secure the W, so we’ll be taking the points on offer and backing the Bengals to cover.

Both of these teams sit in the top half of the league when it comes to defensive DVOA and even the Ravens, the worst of the two defensive units, are capable of putting up huge defensive stands.

With so much offensive talent on display it’s easy to see why the total is as high as it is. Last time these two teams met, the Ravens managed to run all over the Bengals, but that defense has improved against the run and it’ll be a tough ask to get anywhere near the 404 rushing yards they managed last year.

The Under is 5-0 in the Bengals past five games and also 4-1 in the Ravens last five games against teams with a winning record. The trends are pointing towards this going Under and you can imagine with two good defenses this game could be far lower scoring that some might expect.

CJ Uzomah was drafted in the fifth round in 2015 and isn’t a player usually associated with being amongst the elite at his position, as the former Auburn tight end has scored 11 touchdowns, and totaled 1,263 receiving yards on 128 receptions, during his spell in the league.

You might be asking why we’re focusing on an average NFL starter but the Ravens have been struggling against tight ends. Last week they gave up a touchdown to Jared Cook, while Noah Fant, Travis Kelce, and Darren Waller have also had success against Baltimore this season.

The Ravens have given up an average of 74.83 yards to tight ends through six games this year, the third-worst number in the league. Uzomah has done well this season when playing teams that struggle with tight ends — see his 95 yards and two touchdowns against the Jaguars.

We’ll be taking the Over on CJ Uzomah’s extremely low receiving yards total this week, plus it could also be worth having a sprinkle on him to score a touchdown too. 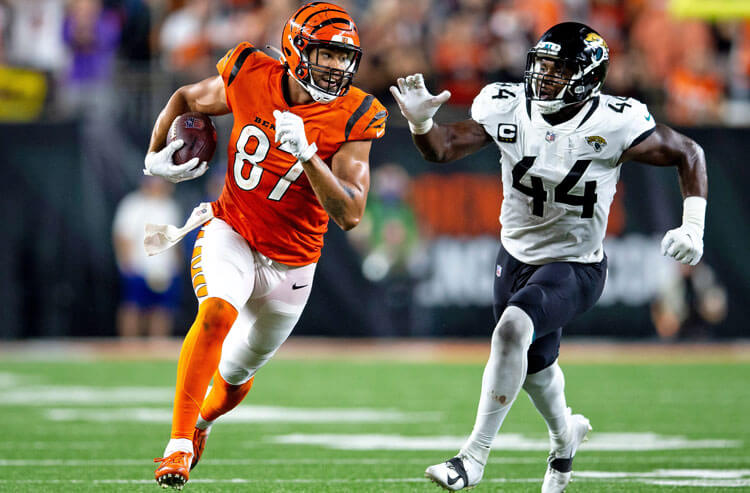 Bengals vs Ravens Week 7 Picks and Predictions: Bengals And Ravens Ready For War
Provided by