We all make mistakes in life. For Covers Senior Betting Analyst Andrew Caley, his biggest mistake this football season is not putting trust in Gary Patterson, though he did that a week ago. Andrew’s greatest example of foolishness this fall isn’t even predicting Alabama will win the SEC, though he did that before the season in a regrettable moment of underestimating Georgia.

Andrew’s biggest mistake this fall is getting married during the football season. But hey, sometimes we make poor choices in pursuit of a greater good.

Thus, a reserve steps forward for a few weeks as your resident Stetson Bennett IV, ably filling in because he is asked to do so little. I am not trying to match Andrew’s 5-1 showing of the last two weeks, but rather his 4-11-1 performance through the five weeks before that.

Like Stetson, I’ll play it conservatively and I’ll focus on the opportunities provided. If Georgia was playing this week, I might focus all three picks on the Dawgs.

Instead, a pair of other contenders can lay a foundation, two Playoff-caliber teams looking to make loud statements each week, and let’s add in a defensive front that is not yet getting enough credit, never a bad betting strategy.

Those and more as the Triple Option returns with Covers’ backup quarterback’s best college football picks and predictions for Week 8.

Arguing for a favorite to cover a multiple-touchdown spread against a service academy’s triple-option approach is not usually sound advice, but both sides of the Bearcats matchup against Navy suggest this is the play.

First, foremost, and most obvious, No. 2 Cincinnati cannot leave its fate in the College Football Playoff selection committee’s hands. In seven years of the Playoff, the committee has never once suggested it will treat a Group of Five team fairly, no matter how strong its season may be. If the Bearcats lose at all this year, their Playoff hopes will be entirely dashed but even if they merely struggle in a close win, their chances will take an unfair knock.

Cincinnati needs to win and win big and win big often. If that comes at the expense of the rest of the AAC, so be it. Getting out to a 35-7 halftime lead on Central Florida last week was no coincidence, nor was it one that the Bearcats backups scored two touchdowns in the fourth quarter. Even when playing reserves, Cincinnati is so much better than the best of the rest of its conference, it can run up the score.

And Navy is not among the best in the AAC. The Midshipmen are still averaging fewer than four yards per rush. After a couple of encouraging weeks offensively, they returned to poor form against decent competition in SMU and Memphis, averaging just 3.18 yards per carry the last two weeks.

A triple-option offense’s ball-control philosophy works only when extending drives. Three-yard rushes do not do that, and converting 33.33 percent of third downs amplifies that failure.

So, the Bearcats should have plenty of chances to hang another number for the committee to gawk at. The AAC will forgive Cincinnati these humiliations if it can bring home a Playoff paycheck for the conference to split before heading to the Big 12 to replace ...

That big number might be a bridge too far for many, but again, the argument comes from both sidelines.

The Sooners do not need to impress the committee like Cincinnati does. The committee is likely to show some deference to a Playoff mainstay no matter what, and if Oklahoma finishes the year 13-0, there will be no question.

The idea of Sooners freshman quarterback Caleb Williams winning the Heisman after half a season of work is an unprecedented possibility and something to debate elsewhere, but it is undeniably an idea out there in the college football ether. In just three halves of genuine work, Williams already has 609 passing yards, with a completion rate of 67.8 percent, and 215 rushing yards, combining for nine total touchdowns. Continue at that rate for a few more weeks and the Heisman hype will only gain steam.

Imagine Riley talking to the next big-time quarterback recruit, the coach of not only three Heisman winners but one of the most ascendant seasons in the sport’s history.

That may all be unlikely yet, but Williams putting up big numbers against Kansas would keep the thought alive for another week. Oklahoma has scored 55 and 52 points in the last two weeks, respectively. Chasing another 50-spot would garner notice.

And Kansas may be happy to acquiesce that chase. The Jayhawks gave up 59 points to Iowa State and 52 points to Duke.

Let’s repeat that. Kansas gave up 52 points to Duke. In football. Less than a month ago.

With that in mind, the question becomes if the Jayhawks can score double digits to cover this big number. Baylor and Iowa State gave up only a touchdown to Kansas. South Dakota and Texas Tech allowed two touchdowns apiece.

Oklahoma should not give up more than that. Can it outscore Duke? Again, we’re talking about football.

One of Caley’s favorite stats to trumpet is that ACC favorites are 7-16 ATS in conference games this year. Three of those covers from underdogs came courtesy of the Orange over the last three weeks.

Yet, even as Virginia Tech falters under Justin Fuente, Syracuse enters Lane Stadium a ‘dog of more than a field goal.

The Orange have logged 24 sacks and 13 quarterback hurries this season. Compare that to 202 opposing passing attempts, and it is clear Syracuse’s defensive front is bothering quarterbacks. While Hokies veteran Braxton Burmeister is somewhat a mobile threat, that has not slowed the Orange pressure in recent weeks.

Syracuse’s last four opponents have all boasted quarterbacks of varying mobility. No one among Liberty’s Malik Willis, Florida State’s Jordan Travis, Wake Forest’s Sam Hartman, and Clemson’s D.J. Uiagalelei is a statue. Willis, Hartman, and Uiagalelei combined for 155 rushing yards on 37 carries against the Orange, getting sacked 10 times for a loss of 61 yards. The most ground-based of the bunch, Travis rushed for 113 yards on 19 carries, but he also managed a paltry 131 passing yards.

Burmeister is more in the mold of the trio than of Travis, and he has struggled against stout defenses in recent weeks, throwing for only 318 yards combined against Notre Dame and Pittsburgh, completing 26 of 62 passes (41.9 percent) with two interceptions compared to one touchdown.

Syracuse’s yards per play defense is better than both those Top-25 teams. Burmeister’s life is not about to get easier.

USC at Notre Dame (-7, 57.5): USC has played in only one game as close as two touchdowns this season, while three Irish victories have come down to a field goal. That difference in typical game flow may jump out in this rivalry. If Notre Dame can get out ahead early, the Trojans have shown themselves prone to packing it in. If this stays close, USC has not had to deal with that pressure yet this year.

Oklahoma State at Iowa State (-7, 47): One of these teams is ranked No. 8. The other does not even fit into the Top 30 of the Associated Press poll if adding on others receiving votes. Care to guess which is favored by a touchdown? The unranked Cyclones. Public perception and polls are often misled by win-loss records, overlooking the fact that Iowa State lost to two Top-20 opponents by a combined 12 points.

Illinois at Penn State (-24, 46.5): Penn State had an extra week to lick its wounds after losing to Iowa when quarterback Sean Clifford was injured in the second half and the Nittany Lions offense completely stalled. With Ohio State waiting in a week, Penn State needs to restore its offensive confidence immediately. Meanwhile, Illinois has averaged fewer than nine points a game in its last three conference games. 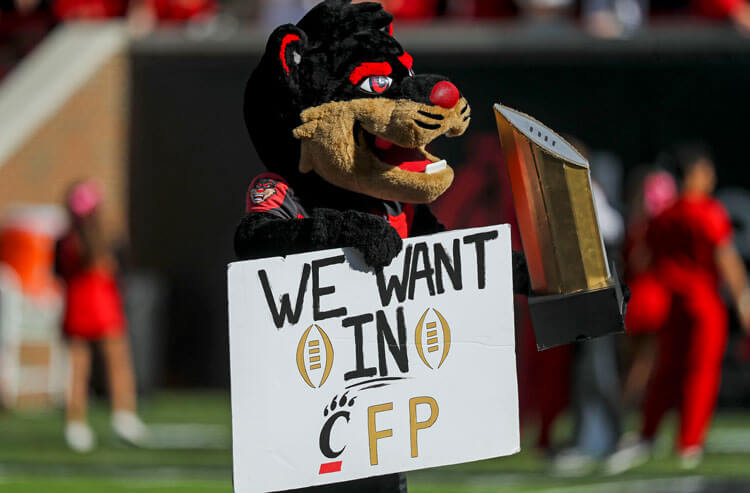