New Orleans had to flee their hometown to prepare for one of the NFL's best teams in Week 1. Find out if the refugees can launch a new identity on the fly as we break down our Packers vs Saints picks.

The New Orleans Saints have swapped out the Superdome for TIAA Bank Field in Jacksonville for their Week 1 matchup against the Green Bay Packers. The Ida-displaced Saints are sitting as low as 3.5-point NFL betting underdogs in this neutral-site game.

New Orleans couldn’t play the contest in Dallas, where they’ve set up temporary operations, so they strategically selected Jacksonville as the venue, hoping the hot and humid Florida weather would give them an edge over Aaron Rodgers and the Packers.

Check our free NFL picks and predictions for Green Bay vs. New Orleans on September 12.

Green Bay was originally a field goal favorite in the Big Easy before the switch in venue. Books pulled the game and reposted the Packers as 4-point chalk, which jumped to -4.5 with early play on Green Bay. However, some books have slimmed this spread to -3.5 with money showing on the Saints earlier in the week. The total for this game reopened as low as 49.5 and jumped to 50.5 before settling at 50 points.

Be sure to check out the full NFL odds before placing your bets, and also view the full line movement for this game.

The Saints have played without Drew Brees before and it was apparent that the future Hall of Famer just didn’t have the same pop in his arm needed to make defenses sweat in 2020, giving way to the QB combo of Jameis Winston and Taysom Hill. Winston is going to get the start Sunday, but you can be sure Sean Payton will throw two scoops of the dynamic Hill at Green Bay in Week 1.

But, add both of those QBs up, and you still don’t have the offensive prowess of reigning MVP Aaron Rodgers, who enters what will likely be his swan song season in Wisconsin. As long as Rodgers is slinging it in the land of cheese curds, Green Bay’s a contender. Having a WR option like Davante Adams also doesn’t hurt.

That’s another angle where the Saints fall short. During Brees’ tenure in Crescent City, NOLA kept the cupboard stocked with targets. But with Michael Thomas sidelined for a while and Tre'Quan Smith missing camp time due to injury, there’s no true No. 1 target to make the big plays needed. Even with do-it-all RB Alvin Kamara out there, New Orleans is out-gunned in Week 1 – a spot this franchise hasn’t been in for a long time.

Preparing for the Packers is tough enough on its own, but doing so in the midst of an evacuation and out of a makeshift headquarters in Dallas will prove to be too much for New Orleans. The Saints have historically struggled against the spread in Week 1 – even in the best of conditions – going 6-9 ATS since 2006, including a 1-6 ATS count in season openers the past seven years, with that lone cover coming against Tampa Bay in 2020.

We’ve slung mud at the Saints’ offense enough. Now it’s time to praise the defense. New Orleans remains among the NFL’s elite stop units in 2021, and this season it will finally step out of the shadow of the offense. The Saints set the standard for run defense and have for years, ranked No. 2 in Run Defense DVOA in 2020.

While NOLA lost depth in the secondary, new defensive coordinator Joe Barry is hoping to bail out that unit with a more active front seven in hopes of upping the sack total and creating some chaos. The Packers do have some injury concerns on a revamped offensive line coming out of camp, and if New Orleans shuts the door on RB Aaron Jones, it can start to send extra pass rushers after Rodgers and test the new-look pass protection.

And speaking of Rodgers, he’s one of the main reasons why this game is being played in north Florida. According to NOLA.com, the Saints selected TIAA Bank Field as the site of this Week 1 game, looking into Rodgers’ career 3-4 record in the state of Florida as well as a ho-hum QBR of 78.1 in games played inside the Sunshine State. The game-time temperatures for Sunday are forecasted to “feel like” 95 degrees with the humidity, at least in the first 30 minutes.

Rodgers played his best football of 2020 indoors, passing for 17 total TDs with only one INT, and hung a QBR around 125.0 on opponents with a 4-1 SU record. But with the move from the quick turf inside the Superdome to the soft Bermuda grass in Jacksonville, we like things to slow down just a touch and stay Under the number.

We mentioned the Saints’ lack of a true No. 1 receiver. That brings us to second-year WR Marquez Callaway, who could win that title by default. But that’s not taking away anything from the 6-foot-2 Tennessee product, who showed flashes of brilliance in the preseason.

Callaway caught just 21 balls for 213 yards as a rookie but posted 77 of those gains in his final two outings of the year. During the 2021 exhibition slate, he had a massive two-TD, 104-yard effort against Jacksonville, and has gone toe-to-toe with standout CB Marshon Lattimore at practice every day.

His receiving yards total is at 48.5 yards O/U for Week 1 and his size and speed will make him a favorite target of the big-armed Winston, who could get him more than halfway there on one throw if they catch the Packers snoozing. 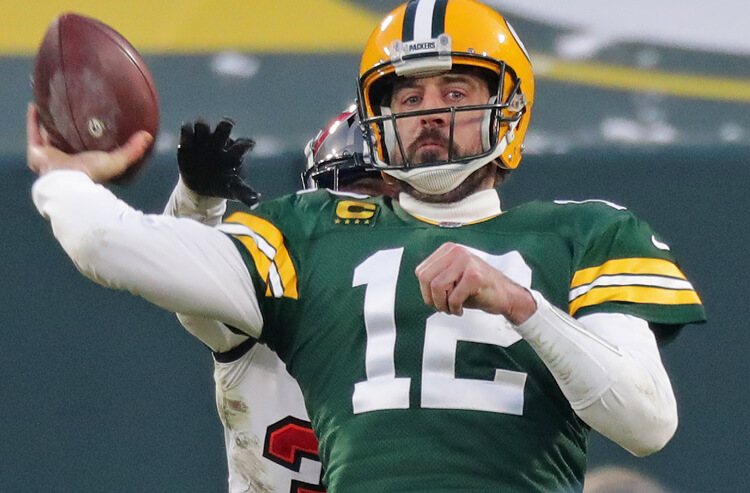