The Patriots defense was decimated last year due to COVID, opt-outs, and injuries. With many key players back and reinforcements added, New England's D should again be elite — and we like that stop unit to be on full display in Week 1 against Miami.

A vital game in the AFC East opens the 2021 NFL betting schedule when the Miami Dolphins come to Foxborough to face the New England Patriots in Week 1.

These divisional rivals are likely chasing Buffalo in the standings and find themselves in a race for second place right out of the gate, with bookies setting the Patriots as 2.5-point favorites for this season opener.

Two young former Alabama quarterbacks share the spotlight, with Miami leaning on Tua Tagovailoa and New England opting to start rookie Mac Jones. These are our free NFL picks and predictions for Dolphins at Patriots on Sunday, September 12 with kickoff at 4:25 p.m. ET.

This spread opened Patriots -2 back in May and jumped as high as -3 in late August before buyback on the Dolphins pushed it back beneath the field goal at some books. There are still some Miami +3 spreads available at select markets. The Over/Under total hit the board at 45.5 points and was bet down to as low as 43 heading into Week 1. Use the live odds widget above to track any future line movement and be sure to check out the full NFL odds before placing your bets.

The home team is 16-5 ATS in the last 21 meetings between the Patriots and Dolphins. Find more NFL betting trends for Dolphins vs. Patriots.

With this spread teetering on the key number of a field goal, you’ll want to shop around for the best number for your opinion. In our case, that’s New England -2.5.

Plenty are passing on the Patriots due to a rookie QB under center, but Jones received a lot of preseason reps (threw 52 passes, completed 36, and posted a QBR of 97.3), showed good judgement and patience, and was graded as the highest rookie QB in the exhibition slate according to ProFootballFocus.

New England doesn’t need Jones to be Tom Brady and they know he’s not Cam Newton, who lost the starting job and his roster spot to the Alabama product. Jones is surrounded by an offense that fits a first-year passer, with active pass-catching running backs and a strong tight end corps, especially if Hunter Henry is active (sounds like he will be).

Last year’s offense struggled to move the chains, lacked talent at the skill positions, and was very limited by Newton’s noodle arm, posting an average time of possession of just 28:57 (23rd in the NFL). The 2021 playbook under veteran coordinator Josh McDaniels has much more to work with and will look to complement a restocked stop unit by controlling the football and the clock.

And speaking of the Patriots defense, this unit suffered in 2020 due to COVID-19 limitations and opt-outs, as well as some key departures in free agency. The season prior, New England’s defense was the belle of the advanced analytics ball, sitting tops in Defensive DVOA at Football Outsiders.

I expect Bill Belichick’s group to rank among the defensive elite once again in 2021, getting Dont’a Hightower back and adding guys like Davon Godchaux, Kyle Van Noy, and Matt Judon to the front seven. The Hoodie has also had a regular camp and preseason to prep and scheme, which meant many long nights watching film on Miami QB Tua Tagovailoa.

The Fins’ second-year QB got a little taste of the Patriots’ makeshift stop unit in 2020, completing 20 of 26 passes for 145 yards and an interception (along with 250 yards on the ground and two rushing TDs) during a 22-12 Week 15 victory in Miami. This is not the same defensive opponent in 2021.

Tagovailoa, who is learning a new playbook under co-coordinators Eric Studesville and George Godsey, could be without multiple cogs of this offense in Week 1. Left tackle Austin Jackson and TE Adam Shaheen are in limbo due to COVID-19. As well, new receiver Will Fuller V is also out for the opener, finishing out his suspension from 2020.

This game will be a defensive battle, with Miami coach Brian Flores boasting a stop unit that finished 11th in DVOA in 2020 and was extremely disruptive. The Dolphins had 41 sacks and an NFL-best 29 takeaways (18 INTs) last year — a chaotic stat that is hard to replicate year over year. That said, this will still be a stout passing defense taking on a careful New England offensive attack.

This total made one of the bigger adjustments over the summer, dropping from 45.5 to as low as 43.5. Some books are dealing a number of 44, so if you like the Under shop for the highest total.

As mentioned above, Tagovailoa ran in two scores in his first meeting with New England in Week 15 last year. And while the Pats will push back a lot more on defense in Week 1, his ability to break off big runs could lead to another touchdown carry.

The Patriots’ secondary is extremely sharp and stacked with tight coverage, giving a retooled defensive line time to collapse the pocket around the Year 2 passer. That will have Tua on the run on plenty of plays, compounded by Austin Jackson’s possible absence on the left side of the line.

Red-zone offense is one of the toughest nuts to crack for coordinators and with a brand new system in place for the Fins, Tagovailoa could default to scrambling for pay dirt when inside the 20-yard line. 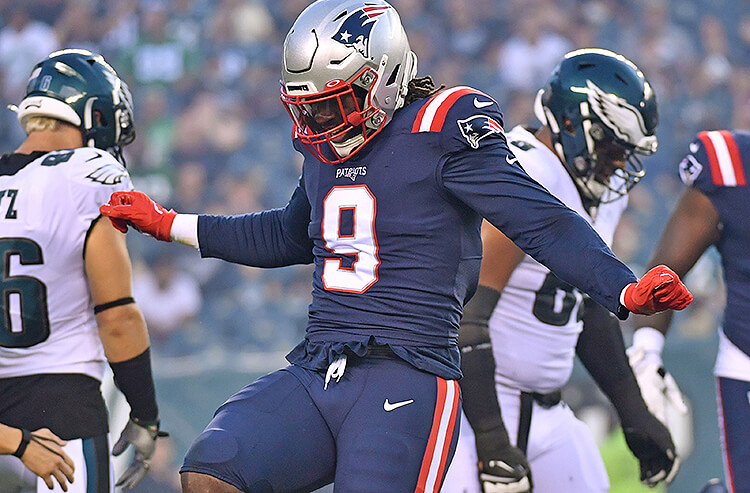 Dolphins vs Patriots Week 1 Picks and Predictions: Pats D Will Shine In Season Opener
Provided by