Browns vs Chiefs Week 1 Picks and Predictions: Cleveland Looks for Revenge In What Should Be A Shootout

After losing to the Chiefs in the 2020 playoffs, the Browns kick off 2021 by visiting Arrowhead Stadium again for a rematch. Cleveland is getting plenty of NFL betting action — but we're backing the home Chiefs giving less than a TD in Week 1.

Both the Kansas City Chiefs and Cleveland Browns are coming off successful seasons that finished with a sour taste in their mouths.

Kansas City got absolutely waxed in the Super Bowl, while Cleveland actually made the playoffs but was eliminated by these Chiefs... with backup QB Chad Henne.

These projected AFC titans square off again in perhaps the marquee matchup of Week 1, with the home Chiefs sitting as 6-point NFL betting favorites.

Which side will start 2021 with a big statement win? Get our thoughts with our free NFL picks and predictions for Browns vs. Chiefs on Sunday, September 12 with kickoff at 4:25 p.m. ET.

Early lookahead lines posted back in May saw Kansas City as a 6.5-point favorite, with the line moving to -6 after Cleveland bolstered its defense during the offseason — and that's where the spread still sits at the time of writing. The opening total of 53 was the highest on the board, and that's only grown, currently moving by 1.5 points all the way up to the current number of 54.5. Use the live odds widget above to track any future line movement right up until kickoff and be sure to check out the full NFL odds before placing your bets.

The Over is 6-0 in the Chiefs' last six Week 1 games. Find more NFL betting trends for Browns vs. Chiefs.

A weird scheduling quirk will see the Browns play two consecutive games against the Chiefs at Arrowhead dating back to last season. And by "scheduling quirk," we mean that Cleveland actually made the playoffs last season for the first time since 2002 and just the second time since being reborn as a franchise.

It was a breakout season in 2020 for Cleveland: Coach of the Year Kevin Stefanski changed the mindset and culture of a historically heinous franchise and, more importantly, quarterback Baker Mayfield took a big step forward in the second half of the season and established himself as a legitimate starting NFL signal-caller.

Cleveland has a deep, talented offense, with talent (and depth) at every skill position, but the true reason for optimism (and Super Bowl aspirations) is the improvements to their 2020 Achilles heel — the defense.

After giving up the 12th-most points per game (and having an almost -150 expected points contributed by the passing defense), the Browns bolstered the defensive line, linebacking corps, and re-tooled a leaky secondary by drafting Greg Newsome II and signing John Johnson and Troy Hill from the Rams.

The Browns' stop unit has a chance to go from a net negative to an impact unit, but it isn't getting a chance to gel before being thrown into the fire against the Kansas City Chiefs — at Arrowhead Stadium.

You know: The team that went 14-2 last year, had the NFL's best passing attack and is led by the best player in the league in QB Patrick Mahomes?

The Chiefs slugged their way to the Super Bowl last season but went into the championship game with a multitude of offensive line issues, which were exposed by a ruthless Tampa Bay defense that had Mahomes running for his life on every play and resulted in an absolute blowout loss for Kansas City.

That led to the Chiefs doing some retooling of their own, reinforcing the offensive line for a team that was arguably the most terrifying offense in the NFL. Add in that Mahomes will be eager to put SBLV behind him and make a big statement in Week 1... and that's a big ask for the Browns to slow them down.

The Chiefs have covered in four straight Week 1s and are 12-2 ATS in their last 14 September contests. They return the same cores — and chemistry — on both sides of the ball, while the Browns return the same offense but have a lot of new parts that need to mesh on defense. That's going to be the difference for us, as we can't pass on getting the Chiefs (at home) at less than a TD.

As mentioned above, both of these teams possess dynamite offenses.

The Chiefs return a nucleus of Mahomes, Tyreek Hill, and Travis Kelce, with an improved offensive line and an expected step forward from last year's first-round pick in RB Clyde Edwards-Helaire. Though Odell Beckham Jr. will miss today's game, the Browns will have Jarvis Landry, Donovan Peoples-Jones, the league's most dynamic one-two rushing punch (Nick Chubb and Kareem Hunt), and an actual full offseason of prep under Stefanski's offense.

Combine that with a Browns defense that has a lot of moving parts still looking to gel together — and a Chiefs defense that may be without secondary anchor Tyrann Mathieu (currently still in COVID protocol) — and this looks like a game where these teams will be trading touchdowns... and a lot of them.

This game originally opened as the highest total on the board, and it's only moved higher — currently sitting at 54.5. Kansas City faced a 50+ point total in seven games last year, going 4-3 — but one game was the divisional playoff against Cleveland (when Mahomes did not play the second half) and one was against a pitiful Denver offense where the defense held Mahomes to his second-lowest point total of the year.

Moral of the story: When Kansas faces a big total at home, barring an anomalous event, points are scored — and we don't expect any anomalies on Sunday afternoon.

Despite the Chiefs having a prolific offense and a lot of big leads in 2020, which often forced teams to abandon the run and go pass-heavy in an effort to play catch-up, Kansas City still gave up the 12th-most rushing yards in the league and had the second-worst expected points contributed by rushing defenses.

That even showed in the AFC Divisional game, where the Chiefs jumped out to a 19-3 halftime lead, and Cleveland running back Nick Chubb had just five carries for 12 yards. Chubb finished the game with 13 carries for 69 yards — despite a negative game script — but had 76+ yards in seven of his previous nine games.

The Browns, who finished 2020 fourth in rushing attempts and third in yards, will certainly want to establish Chubb early in often in the 2021 opener — which will set up the play-action pass AND keep Mahomes from torching this new jigsaw of a defense — which makes us love his chances of topping a rushing total that is well below his 2020 per game average (86.6). 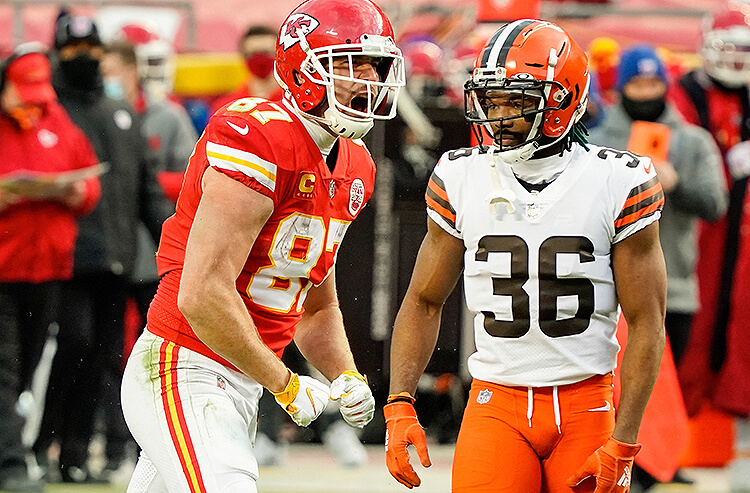 Browns vs Chiefs Week 1 Picks and Predictions: Cleveland Looks for Revenge In What Should Be A Shootout
Provided by